What is Artificial Intelligence?

A popular and widely used technology, Artificial Intelligence (AI), in simple terms, provides abilities to machines to perform a particular task that helps in reducing human effort. This is made possible via specific programming languages, tools & techniques, or codes, that are implemented into the machine so that it can perform tasks with minimal or no human intervention.

History of AI and how it came into existence?

Alan Turing is considered amongst the most extraordinary scientist of the 20th century who created history by laying a strong theoretical foundation of computer science. He was a mathematician, cryptanalyst, logician, and a philosopher.

In 1936, Alan Turing, in an article, introduced a theoretical device that was based on the notion that a machine can imitate any other machine (known as the Turing machine).

What exactly do we mean by AI?

As highlighted above, Artificial Intelligence was coined in the year 1956 by John McCathy. He defined AI as science and engineering to make intelligent machines. It refers to the development of a computer system that has the potential to perform a task that usually needs human intelligence like speech identification, decision making, visual perception and interpretation between languages.

We live in an era where we see the role of Artificial Intelligence in the form of robots, a machine which has vast application in recent times. AI application can be seen in healthcare, sales and marketing, business analytics and so on.

Some Real-world Applications of AI: 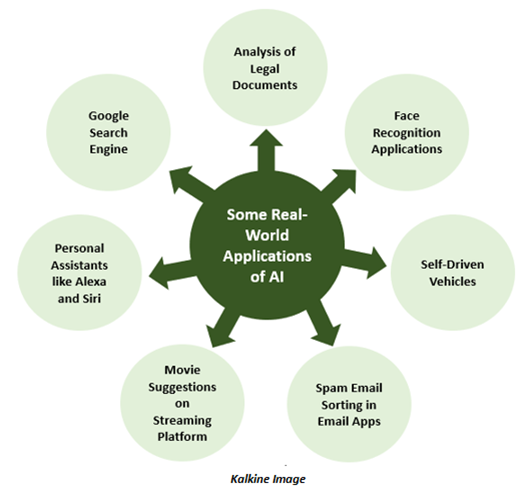 What are the Different Types of Artificial Intelligence?

There are three types of Artificial Intelligence:

Artificial General Intelligence is known as strong AI, and it involves a machine that is capable of performing any intellectual task just like a human being. Till now, we have not reached this stage as there is no machine in the present times that have reasoning ability like human beings.

Artificial Super Intelligence refers to that point of time when the capability of the computer surpasses the capacity of a human being.

Advantages and disadvantages of Artificial Intelligence

After having a fair understanding of AI, let us look into the advantages and disadvantages of artificial intelligence.

With the usage of Artificial intelligence, we would be able to nullify human error completely. The accuracy of the final results would increase. The only thing required here is that the machine is programmed correctly. Once this is done, the devices are able to make accurate decisions according to the previous information that they collect over time based on their past experience based on specific algorithm sets. Thus, it reduces the chances of error and improves efficiency.

Through AI, the task which could be dangerous to humans can be eliminated, and the results obtained through machines would yield good results. For example, through a machine it would be possible to identify any earthquake quickly and faster action could be taken.

Human beings have their own working capacity. However, when machines are considered, they have the potential to work round the clock. These AI machines do not get bored or exhausted, even though they have to repeat the same task multiple times.

Nowadays, we see a lot of customer care queries been taken care of via AI technology. The most common example here is chatbots.

AI and other technologies can help make better data-driven decisions at a much faster rate than human beings.

Moreover, the machine lacks emotions, hence the output we would derive would be unbiased. On the other hand, human beings may get emotionally carried away, but this is not the case with AI machines. They are extremely efficient in result-oriented decision making.

Considering the complexity of an AI-enabled machine, AI technology can be pretty expensive. Designing a machine that can mimic a human being involves a huge amount of time, patience, money, and energy, making this technology expensive.

AI machines lack creativity because whatever actions these machines do are pre-programmed. AI machines are capable of doing a particular task. The biggest disadvantage here is that this technology cannot think out of the box. This is because the AI machine would analyse the situation and based on the pre-fed data along with the data gathered via past experience, the machine gives the output.

As AI technology reduces human effort and improves accuracy, most of the repetitive tasks have now been automated. With these features, businesses are gradually looking to switch to these technologies. Some of these jobs include the data entry operator, talking to the customer, chat support etc.

Future of AI - Glance at Robot Sophia and Robot Rashmi

AI has come a long way since its inception, and there is much more to come in the future. Let us look at AI-driven robots that have gained significant attention in the last couple of years.

Sophia is a humanoid robot that was built by Hanson Robotics. Sophia is a blend of science, engineering, as well as creativity. She is a human-crafted science fiction personality that can be considered the hope of AI technology & robotics.

Sophia is capable of catching the vision of global viewers. She is also the first robot citizen in the world and the first robot Innovation Ambassador for the UN development program. 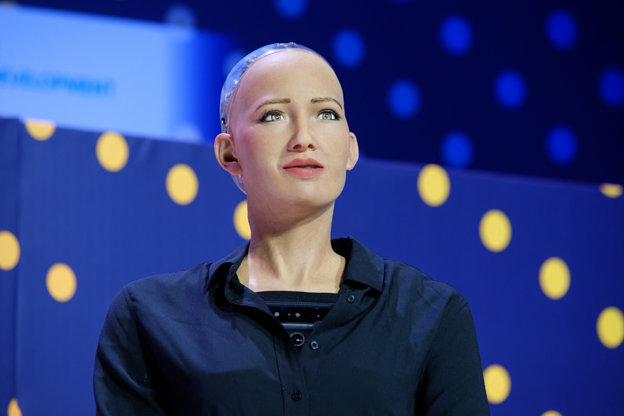 Sophia’s underlying AI parts can be fused in different ways. Hence, her response could be unique as per any given circumstances or communication. Sophia can use machine perception to distinguish human faces, identify hand movements, and see emotional expressions.  She is capable of assessing feelings during any conversation and can support finding a solution to achieve the target. She also its own emotion and can nearly mimic human evolutionary psychology & several areas of the brain. Sophia has IK solvers & path planning that controls the hands, stare, and locomotion plan. Her walking body can do dynamic balance for adaptive walking over several terrains.

Robot Rashmi is an Indian version of Robot Sophia that can speak multiple languages like Hindi, Marathi, and Bhojpuri. She is the RJ at one of the popular radio stations in India.

Some Other Coolest humanoid robots:

Artificial Intelligence has a broad scope that is beyond one’s imagination. AI has the potential to transform productivity and GDP potential of the global economy. To make this possible, there is a need for significant investment in various AI technologies.

As per a research report released by PWC in 2017, 45% of the total economic gains by 2030 would be through product improvements. It would be possible with the help of Artificial Intelligence which would support in increased customization, improved attractiveness, and affordability.

The report also highlighted that AI would contribute over US$15.7 trillion to the global economy. It would boost the economy by 26% in GDP.

Which are the six popular tech trends transforming our lives?

Rising stars: 5 Canadian stocks to look out for in 2021

How is artificial intelligence used in the mining industry?

Which are the most valuable companies in China?

Which are the top five technology stocks on the ASX?

How is artificial intelligence used in the mining industry?

The Buzzing Trends || Have You Looked At These Leading Drone Stocks On ASX?