What is meant by a Certificate of Deposit?

A certificate of deposit is a savings account in which a predetermined amount of money is deposited in a fixed account for a specific amount of time, offering an interest rate higher than other savings account. Certificates od deposit or CDs, are issued to increase the range of money market instruments giving investors greater flexibility in terms of short-term funds utilization.

CDs are issued by commercial banks and act as an agreement between the depositor and the bank. The deposit by the customer must be a lump sum amount and should be left untouched for the specified period. 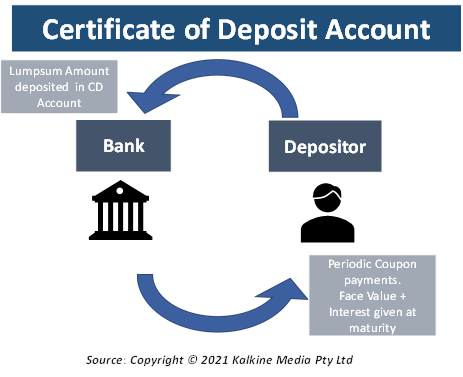 The rates offered on CDs may differ from bank to bank. Besides, the term for which the account is issued may also vary with each bank. If the deposit is withdrawn before the specified amount of time, then the depositor may be subjected to a fee.

How does a certificate of deposit work?

The depositor must deposit a lump sum amount of money while opening a CD account. The issuer of the CD, in return, offers interest payments at regular intervals till the date of maturity. At maturity, the account holder receives the entire amounted that was initially invested, in addition to all the interest.

Investors may find it profitable to opt for CDs that have a longer term rather than those with a shorter term as the former usually have a higher yield. Additionally, CDs have a higher interest rate associated with them compared to other savings accounts to compensate for the funds not being as liquid as other savings deposits.

Certain banks may offer a variable interest rate while others may prefer to hold onto the stock market related indices as an index for the CD. Moreover, not all banks may charge a fee in case of early withdrawal as they allow the owner to withdraw out of the interest earned till that period.

What are the different features of a CD?

Following are the features of a CD that make it a unique security instrument:

However, it might not be beneficial to lock up money in a long-term CD when interest rates are rising too quickly as the depositor may be locked into one rate, missing out in the increasing rate. As a solution to this, investors set up “CD ladders” wherein money is placed in different CDs having differing maturities. Thus, it allows them to always have liquid funds, even with money locked up in CDs.

What types of CDs are there?

CDs can be of various types, some of these include:

Which institutions can issue a CD?

Almost every bank may be able to offer at least one CD, even those institutions that do not have a brick-and-mortar presence may be authorized to issue a CD. Thus, any institution that accepts customers through online platforms may be eligible to issue a CD.

It is advisable to explore different types of CDs that are available before taking the decision to invest in one.

How Australian Fashion Trademark will guide growth in national economy

How to save tax on COVID-related expenses

Woolworths (ASX:WOW) gains 8% in one month, here’s why

Why are Aguia Resources’ (ASX:AGR) copper and phosphate projects set for an exciting year ahead?