What are the money markets?

The money market is a market of short-term debt instruments with maturities up to one year. The primary features of the money market are short maturities and high liquidity. It is one of the prime funding markets for Governments and corporations.

The Government issues sovereign debt as well as money market debt in the form of treasury bills. Participation in money markets is driven by a wider spectrum of investors, including individual investors, institutional investors, banks, companies. Money markets also fall under the broader capital markets and are a significant source of quick funding for an economy.

As a result, the market remains highly liquid for instruments as well as investors. Idle cash with investors usually finds its way to the money markets to earn something. Since cash-generating businesses extensively use this funding market, corporations prefer to park ready money in short term securities trading in money markets.

With a range of issuers, the coupon rates vary across maturities and security type. Government-issued short-term money market instruments set a benchmark for other instruments having similar maturities.

If compared to other capital markets, money markets provide a higher level of security and a low level of returns. This attribute also designates money markets as a preferred choice for parking idle cash and earning little returns.

Money markets also facilitate overnight trades of short-term debt products. They can be bought and sold in large quantities. This makes the market very attractive for investors seeking liquidity and some returns.

What are the functions of money markets?

Money markets facilitate the funding market for corporation and nations, especially for short-term need ranging up to a year. It serves as a financing mechanism for local and international traders who often need short term funds to execute deals.

It allows Governments to borrow money for short term needs. Most of the issuers prefer money markets because it is relatively easier to borrow from markets compared to banks, especially for meeting short term financial needs.

Growth in the economy

A money market is an effective and efficient source of funding for industries. Businesses with credible profiles often access money markets to fund their working capital needs. Money markets are useful for short-term business funding because of the inherent cash realisation cycle.

Short-term needs of businesses could be payment of wages, buying raw materials, etc., and money market instruments like commercial papers provide business with funding at competitive interest rates depending on credit rating.

Money markets do not cater to long term borrowing needs of Government and corporation but are influential in setting up the trajectory for long term interest rates in the economy.

What are the types of money market instruments? 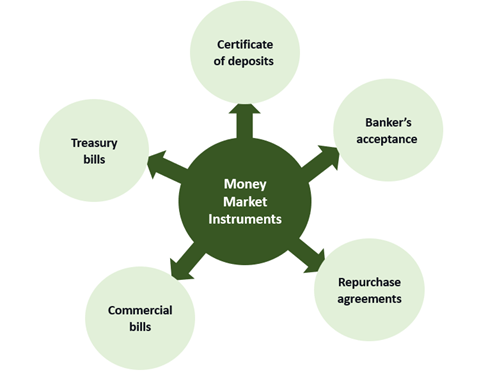 Treasury bills are the most common instruments in the money market. They are issued by the Government of the jurisdiction and counted among the safest capital market securities. The maturity of treasury bills ranges to one, three, six, and twelve months.

They are issued below their par value and redeemed at the full amount. The difference in the buying value and maturity value of the instrument is interest earned by investors. T-bills are traded in primary as well as secondary markets.

Commercial bills or papers are issued by large corporations to finance short term cash needs of the business. Such businesses are usually high cash generators, and investors often find them credible enough to lend money for short-term.

Similar to T-bills, they are also issued at a discount and redeemed at par, making up for returns. Commercial papers carry higher returns than the Treasury bills because the probability of default remains higher relatively.

A commercial paper is an unsecured short-term debt instrument, and the issuers of commercial bills usually carry high credit rating, which also helps investors to price them in secondary markets.

A repurchase agreement is a short-term borrowing instrument for issuers, who agree to pay a higher value for the securities at the time of repurchase. The underlying securities in the agreement are sold to investors and repurchased at a higher price to compensate for the returns.

CDs usually have a fixed maturity and fixed interest rate. The issuer could charge a penalty for redeeming certificate of deposit before its maturity. The interest rates on deposits could vary on invested amount, and sometimes interest rates are also negotiable.

Top defense stocks to explore in 2022

WestJet & Air Canada (AC): Are the airline stocks a buy amid omicron?