A total of 16 holes (6 RC and 10 DD) were completed under the drilling with a specialized low angle (hole dips to 34 degrees) drill rig to:

The drill hole logs, and assay results received from these holes have confirmed that both lode geometry and gold grades are in accordance with inputs and values that were modelled earlier. Thus, the Sand King resource model has also been upgraded to incorporate results from this drill program and the upgraded resource model would now be used to update the Sand King optimum open pit mine design and Mining Reserve.

“It is pleasing to see that the survey and assay results returned from this drill program at Sand King were largely consistent with the pre-drilling expectations of our technical team in terms of both grade and geometry. This outcome has strengthened our confidence in the viability of Sand King as a future open pit gold mine.” - David Quinlivan, Ora Banda Managing Director.

Sand King is one of the several deposits within the Siberia Project Area, which is located ~ 37 km south east of the Davyhurst Processing Plant (@1.2 Mtpa). The historic gold production during 1897 to 1930 was spread over numerous reefs in the area while the four largest historically mined reefs where close to a regionally significant mafic and ultramafic contact. Some other prospective targets within the area include the Pearling Grounds and the Sand King North. Moreover, all these occurrences fall within a mineralized corridor that is located within mafic lithologies bounded by granites in the west and ultramafic in the east (referring to the figure below). 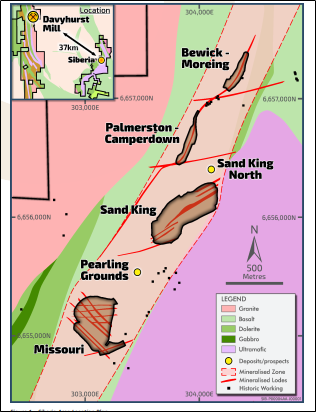 Modern Mining has primarily focused on four open pit deposits including Sand King, Missouri, Palmerston-Camperdown and Bewick – Moreing, that are hosted entirely within the mafic basalts, west of the contact and remain open at depth. Of all these, Sand King is the largest producer having mined ~747,000t @ 4.0 g/t for 88,000 ounces* between 1980 and 1991.

The Open Pit Mining Reserve estimate for the Sand King deposits stands at 1,100,000t at a high grade of 2.6 g/t Au for 93,000 ounces Au, which it an attractive development target.

Ora Banda has also stated that all assay results have now been received from the Davyhurst Gold Project resource definition drilling program which was primarily conducted at five well-analyzed and advanced deposits being – Riverina, Waihi, Callion, Siberia and Golden Eagle located within different sub project areas (referring to the table below). Also, the Company’s Definitive Feasibility Study (DFS) into the restart of mining and processing operations at Davyhurst Project is now on schedule. 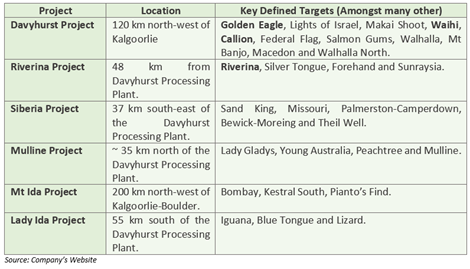