All Ordinaries traded lower by 0.67% and settled at 6,220.0 on 17 August 2020. All sub-sectors in the S&P/ASX 200 index were in red, barring health care and utilities. Banks and blue-chip companies were also down today.

As reporting season is on full swing, let us skim through few of the today’s significant annual result announcements.

Today, KGN reported much-awaited full-year results for the period ended 30 June 2020, and its shares opened lower that had been on an unprecedented upside run over the past few months.

Gross sales, which include transaction values under Kogan’s other verticals like Mobile and Marketplace, grew by 39.3% over the previous year to $768.9 million in FY20 from $551.8 million in FY19. 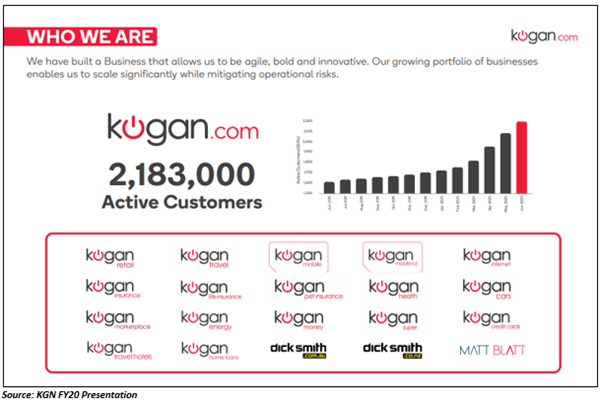 Active customer base of the company grew 35.7% to around 2.18 million compared to 1.6 million at the end of last year. As a result of COVID-19 lockdowns, business performance in the second half of the year was favourable with significant growth in gross sales, gross profit, and adjusted EBITDA.

In the last months of last year, the company completed the acquisition of online furniture retailer, Matt Blatt. The acquisition, under Kogan.com, started operating after one day of signing the deal.

At the end of the period, the company had an inventory of $112.9 million. It was understood that the company seeks to meet anticipated high demand, especially of Exclusive Brands. Almost all inventory (99%) was less than 365 days old.

In FY21, the company intends to grow organically and inorganically. KGN would develop and enhance the Marketplace business, improve active customer base, expand Exclusive Brands as well as third-party products. Although the company has refrained from providing earnings guidance, the July trading was strong with over 110% and 160% y-o-y growth in gross sales and gross profit, respectively, while adjusted EBITDA was over $10 million.

JB Hi-Fi also released full-year results for the period ended 30 June 2020. Its total sales for the year were $7.9 billion against $7.1 billion in the previous year. Demand for consumer electronics grew as people spent more time at their home.

Underlying NPAT stood at $333 million for the year and underlying EBIT was $486.5 million, both increased by over 30% against the previous year.

The company has been investing in the safety of stakeholders, including face masks, intensive cleaning, store traffic limits, hand sanitisers, and temperature checks. In Australia, the company did not receive wage subsidy from the Government but received NZ$3 million in New Zealand.

JB Hi-Fi experienced strong growth in online sales, which grew by 48.8% to $597.5 million, constituting 7.5% of total sales. A large increase in online sales was recorded in the last quarter of the year. 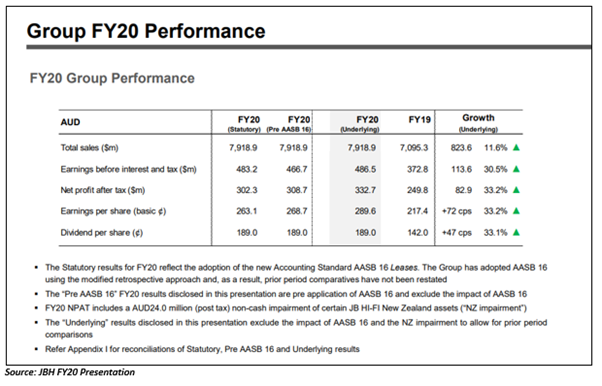 JBH has continued investing in digital capabilities, with a new JB Hi-Fi platform for Australia launched along with investments in supply chain and logistics. The company also started consolidation of 18 distribution centres into home delivery centres, with Sydney, Brisbane and Melbourne transitioned during the year.

JBH has announced a fully franked final dividend of 90 cents per share, taking total dividends to 189 cents per share, up 33.1% from the previous corresponding period. The dividend is due for payment on 11 September 2020 to shareholders of records on 28 August 2020.

The current dividend pay-out of 65% is appropriate for distributing income, reinvestment for future growth, and repayment of debt, the update highlighted.

In both places, the company continues to operate through its online channels, offering contactless pick-up or home delivery options for customers.

Although JBH has not provided guidance for FY21, the company acknowledged that momentum has continued to date, and lockdowns in Victoria have accelerated online sales in the region during initial days after lockdowns.