Earnings before interest and taxes

What is Earnings Before Interest and Taxes (EBIT)?

Earnings before Interest and Taxes (EBIT) is a profitability metric. It is found in the Income statement or Profit and Loss Statement. It is derived by reducing the cost of input materials and operational expenses from Revenues. It also does not take into account any one-time, non-recurring incomes or expenditures.

It is the most fundamental indicator of whether a company's revenues are sufficient to cover financial and statutory liabilities. It indicates the core operational Profitability/ earnings and is often referred to as Operating Profit or Profit before Interest and tax (PBIT).

How is EBIT computed?

Following are two methods used frequently to compute EBIT at a broader level.

In the above formulae, operating expenses include Selling & Distribution, Research and Development, Administrative and Depreciation Expenses. The first one is a formula based on the Top-down approach, also known as the direct method, and the second is based on a Bottom-up approach, often termed as the indirect method.

Both the techniques arrive at the same result. We can also say that EBIT is the proportion of Net income attributable to operations before deducting capital and taxation charge. Hence, when we add back interest and taxation to a company’s net profits, we derive Earnings before Interest & Taxes (EBIT).

Sometimes analysts also do not take non-operating incomes, like investment income/ dividends, as a part of the revenue to show the accurate picture of operations

Say in the last Financial Year company ABC Ltd. recorded a Total Revenue of AUD 20 million, Cost of Sales; AUD 5 Million and Operating Expenditure of AUD 4 Million, then EBIT of ABC Ltd be AUD 11 Million as per above-stated formula.

Is EBIT the best Profit measures?

There are many other profitability measures which investors use for judgement. These are Gross Profit, EBITDA (Earnings Before Interest Tax Depreciation and Amortization), Earnings Before Taxes (EBT), as shown in the diagram below. Most Income statements do not reflect the computation of EBIT and all of the other metrics separately. This is because it is not generally required in generally accepted accounting norms. Given below is a sample Income statement showing a few different profit measures. 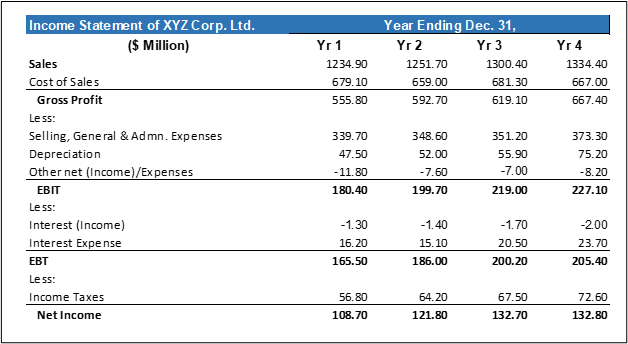 According to the computations, the utility of these varies as per the purpose of analysis. EBITDA is typically a metric for capital-intensive and leveraged corporations. EBIT is useful to stakeholders and experts when scrutinizing the performance of a business's core procedures. Whereas EBT is helpful in equity holders who want to eliminate the interest charges paid to financiers. Similarly, Net Income is used in analysis when experts want to stop all kinds of external charges on profit. None of them can be termed as the sole measure of any corporation's actual profitability or earnings capacity.

A business’s earning potential is given priority rather than its capital structure. Thus, EBIT is used for computing many operational and financial ratios. It also helps in making industrial comparisons and drawing conclusions.

A low EBIT number reflects operational issues in an organization or industry in which it operates. It is also broadly compared with Free cash flow from Operations. For Industries eyeing to appeal to investors or prospective buyers, EBIT can indicate the company’s profit earning or operational capacity. It is predominantly helpful for investors paralleling different firms with different tax obligations.

To an investor, a company that acknowledged a tax break might seem extra profitable than the one that hasn’t. Gauging earnings before interest and taxes can assist in illuminating this situation. EBIT is sometimes also helpful in examining businesses in capital-intensive industries. They may have various fixed assets on balance sheets sponsored by debt, indicating high interest expenses. However, EBIT measures profitability that shreds out debt and its associated expenses.

How is EBIT useful in Financial Analysis?

Why is Canada Goose (TSX:GOOS) stock heating up?

Saputo (TSX:SAP): What to know about the dairy stock before you buy it?

Darktrace (LON: DARK): Should you buy this stock now?

Is ATZ stock a buy as Aritzia more than doubles its profit in Q3 FY22?

Three ASX-listed SaaS shares to look at in January 2022

Two ASX-listed tech shares to look at amid sell-off

What's next for Organigram (OGI) stock as it hits 'record' Q1 revenue?