What is a franked dividend?

Franked dividends were created to halt the double taxation of corporate profits. The concept was first introduced in Australia back in 1987.

Before 1987, the company’s income was taxed, and the dividend was distributed from the after-tax profit. The dividend received by the shareholders was categorised as other income and was taxed while calculating income tax. It resulted in double taxation of dividend income. 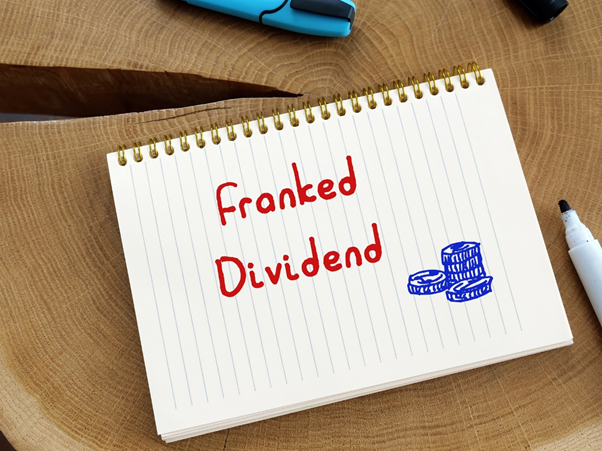 For example, companies, including those listed on the ASX (Australia Stock exchange), pay ~30% tax on their profit. The dividend is distributed to the shareholders from the remaining profit. When shareholders file their personal income tax, dividend income is taxed again as it is seen as other income.

The dividend income coming from already-taxed profits is termed as a fully franked dividend.

Double taxation is eliminated by giving shareholders tax credit, generally known as franking credit. It is also termed as imputation credits. It represents the tax amount which is already paid by the company that is distributing dividend. While paying income tax, shareholders share the information about the dividend income along with the franking credits.

In general, a company’s tax rate is a fixed 30%, while a shareholder’s personal tax rate, which is also considered, could be higher or lower. If a shareholder’s maximum tax rate is under 30%, the difference in the paid tax will be refunded by the Australian Tax Office.

How do franked dividends work?

Franked dividends come into the picture when an Australian firm pays dividends to their shareholders after paying tax on their total earnings. It works in the following manner:

How is franked dividend calculated?

To calculate franked dividend, firstly, the franking credits are calculated by using the following formula:

For example, suppose a shareholder received AU$140 as a dividend (fully franked) from a corporation that pays 30% in tax. The franking credit will be calculated as:

What is the holding period rule?

To avoid or control investors from exploiting franked dividend for personal benefits, the Australian taxation department introduced a rule required to be fulfilled before using franking credits.

The holding period rule states that shares of the franked dividend firm must be held for 45 days minimum. These 45 days do not include the day of purchase or sale of shares.

What are unfranked or partially franked dividends?

Unfranked dividends: There is a possibility that the dividend distributed is not a part of the company’s profit which is taxed. For example, a company sells their asset, and it might be exempted from taxes.

Franking credits are not attached to the unfranked dividends, and shareholders have to pay tax on the dividend received.

Percentage form is utilised to indicate partially franked dividends. For example, a partially franked 60% dividend indicates that the organisation has paid taxes on 60% of the dividend and still has to pay tax on the remaining 40%.

What are the advantages of franked dividends?

The introduction of franked dividends has allowed organisations to manage their capital efficiently and attract investors as these companies become a good investment prospect.

How can franked dividends be utilised to assess an investment opportunity?

While investing in a dividend-paying Australian firm, the franked dividend should be carefully compared with the unfranked dividend. The return needs to be calculated while making a comparison before investing.

An unfranked dividend of 10% means that the stakeholder will have to pay tax on it. Assuming 30% tax, the net return is only 7%.