Every year during August, several ASX-listed companies, with financial year ending 30 June, start posting their annual results. The others announce their quarterly or half-yearly results around the same time. The financial results give a clear picture of the performance of a Company along with the various activities carried out during the period.

In the 12 months to 30 June 2020, Australia experienced the impact of bushfires in the first half, and in the second, had to face the COVID-19 pandemic. The effect from the two events has been damaging, and the Australian economy has had a torrid 12 months.

Many companies were severely impacted while some got an opportunity to generate business and improve their top line and bottom line. The financial results are a good indicator of which category that Company belongs to – the ones that benefited from the recent pandemic or the ones that did not.

In this article, we would look at five ASX-listed companies which released their results and see how this past year turned out for them.

While most organisations were affected by the pandemic, SEEK and Downer managed to weather the storm with the former even generating decent profits. Transurban, News Corporation, and Computershare, however, could not pass the Litmus Test with a significant fall in revenue during the period for the first two players.

Transurban Group, the owner, operator and developer of electronic toll roads and intelligent transport system has released its FY2020 results and has reported a drop in its revenue by 13.2% to US$3,616 million. COVID-19 impacted the performance of the Company. The performance would remain sensitive based on future government responses and overall economic conditions.

During FY2020, the Company completed three projects, and another two assets joined the portfolio during July 2020. M8 was opened to traffic and tolling starting on the M5 East. West Gate Tunnel Project now expected to finish in 2023 and is subjected to commercial and technical issues which resulted in the delay in tunnelling. At present, M5 West is entirely owned by Transurban after the Company acquired the remaining 34.62% minority interest in October 2019.

SEEK Limited, the operator of online employment classifieds and education and training experienced an impact on financial results as a result of weak macro conditions and COVID-19. The revenue grew by 3% as compared to the previous corresponding period. The EBITDA declined 9% on pcp, influenced by the external environment and investment bias.

The Company built its foundation for growth in the APAC region. In ANZ, the Company noted a resilient depth result and launched a new pricing model. In Asia, SEEK is in the process of integration and investment to unlock long-term revenue potential.

A strong result was seen across Zhaopin, OES and Early Stage Ventures. 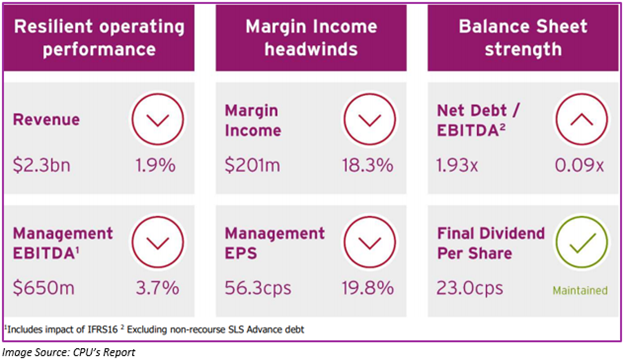 CEO, Stuart Irving commented that the business had proven its resilience. It continued to perform during the last few months of the FY2020 despite the significant COVID-19 impact and the linked volatility.

Before March, the Company was able to trade comfortably in advance of internal budget assumptions. Although 75% of CPU’s revenue is recurring, still the Company noted its market-facing and event revenues impacted due to reduced activity levels. Falling interest rates also affected its Margin Income.

The balance sheet of the Company remained sturdy, and the Group generated a free cash flow of US$506 million.

During the beginning of the quarter, Computershare had revised its FY20 and FY21 guidance regarding the impact of COVID-19.

Downer EDI Limited, a provider of integrated services in Australia and New Zealand, noted a slight drop in its revenue by 0.5% to A$12,742.7 million. Earnings before interest and tax, which were A$462.2 million during FY2019, slipped by over 100% and delivered a loss of A$41.3 million. Loss from ordinary activities after tax attributable to members of the parent entity was A$150.3 million.

DOW has complied with all Government regulations and advice regarding COVID-19 pandemic and has a strong BCP in progress. The Company implemented various control measures across its offices and sites to reduce the risks of COVID-19 spread.

A Glance at the Group’s Financial Performance:

Downer, on 29 July, announced A$324 million worth of contract wins and extensions. The Company also bolstered its balance sheet raising A$400 via equity raising.

Global newspaper and book publishing, related media and information services provider Company, News Corporation noted a fall in its revenue by 11% to US$9,008 million. A considerable fall of 919% was seen in the net income to negative US$1,269 million.