Sky and Space Global Ltd (ASX: SAS), a developer of narrow-band communication network based on nano-satellites announced on 14 May 2019, that pursuant to ASX Listing Rule 17.2, SAS requested the voluntary suspension over its securities to remain in place.

On 13 May 2019, the company had notified that it had signed a definitive agreement with GomSpace. Under the agreement GomSpace will provide the provision as well as manufacturing of an additional fleet of nanosatellites (6U Agreement) in order to support a Global Coverage constellation. 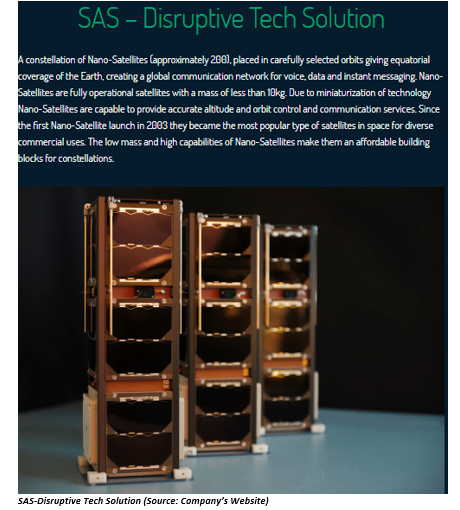 The launch of the new nanosatellites would be into the Global Coverage high inclination orbits allowing full global coverage. Further, it will be supporting the ability of the company to enter into the new markets, which includes of Argentina, Australia, Canada, China, South Africa. It will also generate increased revenue with the added coverage capability and reduce the risk by using space-proven hardware along with technology.

Both the companies have agreed that within a period of one month, they will conclude their discussions with regards, to amendment to the existing Pearls nanosatellites manufacturing agreement. This decision was made post the signing of a Heads of Agreement between SAS and GomSpace regarding the 6U Agreement along with changes to the Pearls Agreement (as announced by the company on 9 April 2019).

The company will be using the assets that were already developed under its Pearls Agreement for its Equatorial constellation, which includes proprietary software, the concept of operations, as well as network infrastructure and forms a part of new 6U Agreement’s Global Coverage. Apart from this, under the current Pearls Agreement, there are subsequent launches intended to remain as planned.

Recently, the company signed a Memorandum of Understanding with SpaceChain Foundation, where both the parties will work together to explore, as well as evaluate the best way to use the nano-satellite constellation to implement the blockchain based technologies of SpaceChain. This MoU further enhances commercial opportunities as well as increase potential future revenues.

The company has two new Reseller Agreement with IoTivity and Penteon which has further strengthened the company’s progression to monetize, once the nanosatellite gets launched into space.

At present, the shares of SAS are under voluntary suspension to finalize the appointment of two Australian residents non-executive directors with adequate skills and experience. It also includes the complete negotiation of the material, commercial as well as operational agreements to support the ongoing operations and the growth strategy.

Also, as announced by the company on 4 April 2019, the company’s securities were placed under trading halt at its request, pending a release of an announcement.