BPH offers financing for commercial strategies for product development and research, proof of concept, whereas the institutional partners supply the core scientific expertise and infrastructure.

The company enjoys strong market opportunities in different sectors via its significant investments.

Let us take a look at the opportunities available to each of its investee companies in their respective areas below:

BPH initially has 10% interest in PG Aust or Patagonia Genetics Pty Ltd, with an option to acquire total shareholding of 49% in the firm via a terms sheet. PG Aust is a craft cannabis company that has a 100% stake in a Chile-based corporation, Patagonia Genetics SPA.

Patagonia Genetics also has the worldwide distribution rights to Wonderland Agronutrients, one of the leading Chile-based brands of biostimulants and cannabis-oriented fertilisers. The company has recently purchased the first 1,300 litres of Wonderland’s products to deliver samples to major licensed manufacturers and expand shops internationally.

The medical cannabis sector has demonstrated substantial growth in the last few years, with numerous ongoing developments boosting the sector’s feasibility. There is a strong market opportunity for cannabis in the LATAM region which enjoys some exceptional qualities, such as highly promising growing conditions, excellent real estate worldwide, supportive climatic conditions and relatively cheap labour.

The region also has the capability to produce cannabis at considerably low-cost in commercial quantities relative to the rest of the world. With its unique attributes, the region possesses the potential to become an international leader in cannabis production.

BPH has 22.6% stake in Advent Energy Limited, an oil and gas exploration and production firm based in Perth, which has accumulated many hydrocarbon permits containing near term production potential with developed infrastructure and significant exploration upside.

Advent has 85% stake in PEP 11 permit in the offshore Sydney Basin and 100% interest in both EP386 and RL1 (Retention Licence 1) permits in the onshore Bonaparte Basin in Western Australia.

Counted amongst established petroleum basins, the Sydney Basin holds sizeable potential for the gas discovery and has been mildly explored to date.

As per the Australian Energy Market Operator, the established gas reserves in eastern and south-eastern Australia are insufficient to meet the growing demand for gas. This gas supply crisis has shaped a huge market opportunity for Advent, whose PEP 11 permit has been assessed to encompass multi- Trillion cubic feet targets proximate to Sydney’s major population region and exceptional power and port infrastructure.

Besides PEP 11 permit, the RL1 and EP386 permits also hold significant potential to meet the growing market demand for power generation capacity, that has been discovered across the Kimberley region.

BARM has been developed to help anaesthetists keep their patients optimally anaesthetised and to better detect the effect of anaesthetic agents on patients’ brain activity.

Cortical has already received Korean KGMP Certification, the CE mark and the TGA approval for its BARM technology.

Take a look at the key advantages of BARM below: 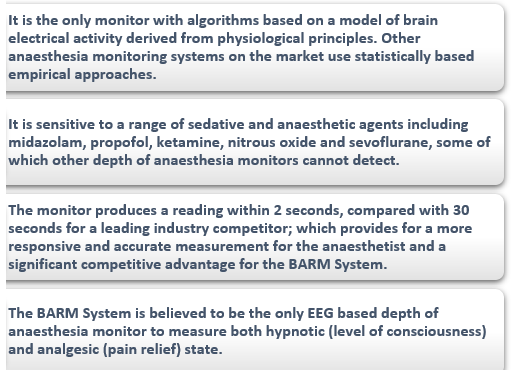 As per BPH’s Annual Report 2018, the global brain monitoring market is likely to grow further to reach $1.6 bn by the next year, offering a substantial market opportunity to Cortical.

Cortical’s BARM uses a fundamentally distinct approach in comparison to the other devices, with its technology containing specific physiological insights in relation to the way electroencephalogram (EEG) indexes are generated and the way it is impacted by sedative medications and anaesthetics.

Cortical also has a sizable market opportunity in Europe’s Total Intravenous Anaesthesia (TIVA) market, wherein numerous major surgical procedures are conducted each year. TIVA presents a technique of encouraging and maintaining general anaesthesia intravenously without making use of any inhalation agents. In the European Union, about 29 mn general surgery general anaesthesias are undertaken every year, out of which 55% are balanced anaesthesia, and 20% are TIVA using propofol.

Owing to its versatility that outweighs the depth of anaesthesia, BARM holds the potential to be utilized to other EEG based markets like drug discovery, emerging BCI (Brain Computer Interface) market, drug evaluation and neuro-diagnostic markets.

Since its inception, Molecular Discovery Systems has been focussing on the drug discovery and certification of biomarkers for disease, diagnostics and therapy. The company has been particularly engaged in the validation of HLS5 tumour suppressor gene for liver cancer.

Liver cancer is one of the leading reasons of cancer-related deaths in developing countries. There has not been any major improvement in the diagnosis of liver cancer despite an increase in survival rates for many cancers in the last 20 years.

Emerging as one of the major cancer challenges in Australia, liver cancer is likely to increase mortality in the nation. Amidst this scenario, the availability of limited treatment options offers a considerable opportunity for Molecular Discovery Systems, whose HLS5 has been found to suppress liver cancer cells in former studies.

With the significant market opportunities ahead, BPH’s investee companies are likely to boost BPH’s growth prospects further. The company is expected to attain long-term value creation with its growth-driven and diversified strategy.