BPH Advancing in Biotechnology Space with its growth-driven strategy

Founded in 2004, BPH Energy Limited (ASX: BPH) is a diversified firm that holds significant investments in biotechnology, medical cannabis and resources sector. The company is engaged in the commercialisation of portfolio of biomedical technologies emerging from joint research by top medical institutes, universities and hospitals throughout Australia.

BPH entered into the biotechnology space via investments in Cortical Dynamics Ltd and Molecular Discovery Systems. Let us discuss each one of these investee companies in some detail below:

The medtech company has already received both Therapeutic Goods Administration (TGA) approval and the CE mark for BARM, a major milestone in the commercialisation of BARM.

BARM is shielded by 5 patent families in multiple jurisdictions across the world, comprising of 22 granted patents. Cortical is focusing on maintaining its intellectual property and obtaining regulatory approvals for the monitor.

Cortical received notable feedback from anaesthetist, Dr Adrian Sultana, who trialed BARM at Strathfield Private Hospital and St. Luke’s Private Hospital, Sydney. Below are the significant conclusions achieved from the testing in 2018 and 2019: 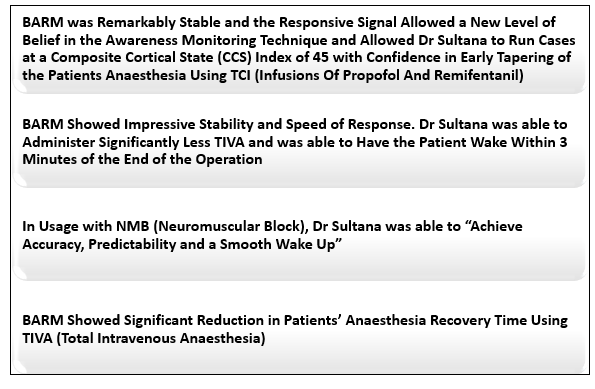 BARM has now been used on about 160 patients at these two hospitals in Sydney and is being currently trialed at Southampton University Hospital by LiDCO Ltd UK.

The competitive advantage of Cortical’s BARM as “a paradigm busting technology” has been recognised by leading anaesthetic experts across the world.

BARM’s underlying algorithm generates electroencephalogram (EEG) indexes which have a direct correlation with the physiological condition of the brain. Such kind of monitoring is becoming extremely essential during surgery, and despite the commercial availability of several EEG monitors, one that can certainly quantify the anaesthetic state of the patient still represents a significant unmet demand.

The approach used by BARM is fundamentally distinct from all other devices, as BARM’s proprietary technology includes specific physiological insights regarding the way the EEG is produced and the way it is affected by sedative drugs and anaesthetics.

One of the most important advantages of the BARM System is that because it directly measures the brain’s activity and level of consciousness, patients can emerge from anaesthesia as soon as the operation is finished. By using this function patients can be administered less anaesthetic medication, resulting in fewer anaesthesia related post-operative side effects (headaches, nausea, etc). Below are some of the other major competitive advantages of BARM system- 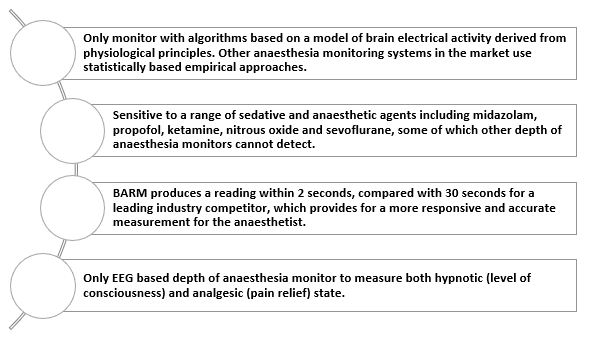 Initially, Cortical is focusing on the Total Intravenous Anaesthesia (TIVA) market within Europe. TIVA offers a technique of stimulating and retaining general anaesthesia intravenously without using any inhalation agents.

As per estimates, around 29 million major general surgery general anaesthesias are carried out each year in the European Union, out of which 20 per cent are TIVA using propofol, and 55 per cent are balanced anaesthesia (using a combination of intravenous agents like volatile gases and propofol). This generates a significant market opportunity for Cortical in Europe alone.

The company is currently working on expanding its footprint across Europe, Australia, New Zealand, Korea, Hong Kong and the USA.

BARM has a versatility that outranks the depth of anaesthesia and can be utilized to other EEG based markets, such as drug evaluation, drug discovery, neuro-diagnostic, and the evolving Brain computer Interface (BCI) market.

There are substantial opportunities presented by the subsequent expansion of BARM by developing the product to perform additional functions including neuro-diagnostics of variations in brain and memory functions to deliver a timely warning of degenerative diseases, pain response and tranquiliser supervision for trauma patients in ICUs.

Since its launch in 2006, Molecular Discovery Systems or MDSystems has been engaged in drug discovery and the validation of biomarkers for therapy, disease and diagnostics. The company has been working with the Molecular Cancer Research Group to validate HLS5 tumour suppressor gene as a novel gene, especially for liver cancer.

As per BPH, liver cancer is one of the leading causes of cancer-associated deaths in emerging countries. In 2012, around 782k new cases of liver cancer and 745k deaths were reported worldwide, out of which almost 50 per cent of cases were from China alone. Although the survival rates for several cancers have improved in the last 20 years, there has not been any significant improvement in liver cancer diagnosis.

Liver cancer has become one of the biggest cancer challenges in Australia, with an expectation of increased mortality from this cancer ahead.

Currently, there are limited treatment options available for patients suffering from liver cancer. This offers a considerable market opportunity for MDSystems, whose HLS5 was found capable of suppressing liver cancer cells in a research undertaken by laboratories and the Perkins Institute team in China.

Stock Performance: BPH is currently trading at $0.002 on the ASX, with ~3 billion outstanding shares as on 27 September 2019. The stock has delivered a substantial return of 166.67 per cent in the last one year.

It can be inferred that BPH’s investee companies hold significant potential to capture the brain monitoring and liver cancer market in future, thereby increasing prospects of growth for BPH.