BPH advancing well in Resources Sector, Backed by its Investment in Advent Energy

A diversified player headquartered in Australia, BPH Energy Limited (ASX: BPH) holds considerable investments in medical cannabis, resources and biotechnology sectors. The company is engaged in the development of biomedical research and technologies within hospital institutes and universities of Australia. Besides, the company provides commercialization, early stage funding and project management strategies for a spin out company, a direct collaboration or to secure a license.

The activities of the company are targeted to attain long-term value creation, backed by the growth of its key investments, as mentioned below:

Among all its major investments, BPH Energy holds the maximum interest in Perth-based oil and gas exploration and production company, Advent Energy Limited.

Advent’s permits include Petroleum Exploration Permit 11 or PEP 11 (85 per cent) in the offshore Sydney Basin with 100% stakes in Exploration Permit 386 (EP386) and Retention Licence 1 or RL1 in the onshore Bonaparte Basin in the north of Western Australia. 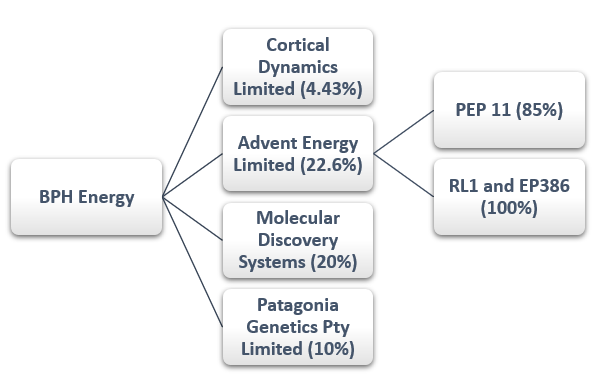 Let us discuss each of these permits in some detail below:

Advent has 85 per cent interest (through wholly owned subsidiary Asset Energy Pty Ltd) in PEP 11 permit which is prospective for natural gas, with the rest 15 per cent owned by its Joint Venture (JV) Partner Bounty Oil & Gas NL. Recently, the company notified about the termination of the JV agreement for the PEP11 permit by mutual consent. The company informed that the JV is now assessing evaluating and proceeding with the program for the well drilling of the Baleen drill target.

In a geochemical investigation undertaken in 2010, it was found that the Baleen prospect carries a greater likelihood of success than other prospects in PEP 11. Consequently, the company conducted a high resolution 2D seismic campaign around a key drilling prospect in 2018 at Baleen in PEP 11 to support the further drilling. On 31 December 2018, MEC announced that there were “no seismically defined shallow gas hazards” at the proposed well location on the Baleen Prospect.

The PEP 11 permit has been evaluated to contain multi-Tcf (Trillion cubic feet) targets close to the major population region of Sydney and outstanding port and power infrastructure.

The Australian Energy Market Operator has issued warning that the established gas reserves in south-eastern and eastern Australia can only meet projected demand till 2019. The existing gas reserves present in gas fields in the Cooper and Bass Strait Basin in South Australia, are declining. The gas supply crisis on Australia’s east coast has created a considerable market opportunity for Advent.

The Sydney Basin is a recognized petroleum basin with substantial potential for the discovery of gas and has been lightly explored to date. Advent has exhibited an active hydrocarbon system with seeps recorded in the offshore area and sampling has revealed the existence of thermogenic hydrocarbon gas. This is considered to occur in basins containing excellent migration pathways and/or that actively generate hydrocarbons.

Recently, the NT Department of Primary Industry and Resources renewed RL1 in the Northern Territory to Advent for a five-year period ending in July 2023. The Retention Licence 1 covers the Weaber Gas Field, first discovered in 1985.

The current advancement of the Kununurra region in the Northern Territory, including the township of Kununurra, the Ord River Irrigation Area and its future potential growth, and several regional resource projects, offers a remarkable opportunity for Advent to potentially advance its nearby gas resources.

Market surveys have discovered a substantial market demand across the Kimberley region for power generation capacity, that could possibly be provided by Advent’s conventional gas projects in RL1 and EP386.

BPH Energy’s investee company, Advent has experienced significant progress over the years via its highly prospective permits. The company holds a substantial potential to enter into further agreements with major gas companies, backed by its strong fundamentals.

CLICK HERE FOR YOUR FREE REPORT!
Tags:
Healthcare News BPH
All pictures are copyright to their respective owner(s).Kalkinemedia.com does not claim ownership of any of the pictures displayed on this website unless stated otherwise. Some of the images used on this website are taken from the web and are believed to be in public domain. We have used reasonable efforts to accredit the source (public domain/CC0 status) to where it was found and indicated it below the image.