A fossil fuel, crude oil is available in underground pools or reservoirs that are within sedimentary rocks, and near the surface in tar (or oil) sands. Crude oil is refined into several different types of petroleum products such as gasoline, jet fuel and diesel fuel, in addition to products such as plastics and medicines that we use in our daily lives. 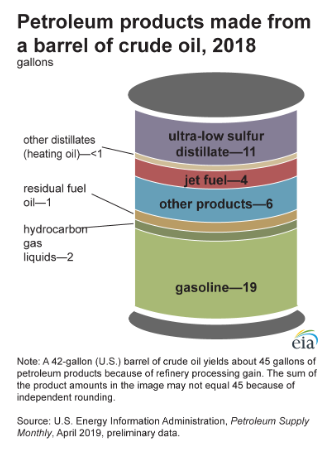 On a global level, supply and demand determine the price of crude oil.

Economic growth is amongst the major factors that impact the demand for crude oil. Generally, demand for energy or petroleum products surges, as an economy registers growth and vice versa.

Uncertainty regarding future supply or demand is in general influenced by geopolitical events and severe weather, resulting in higher volatility in oil and petroleum product prices.

Consequently, making projections regarding oil prices for the future is difficult, as large changes on the global level have the potential to influence oil prices.

Supply of crude oil, biofuels and other liquid hydrocarbons, globally, is anticipated to be enough to meet the future needs through 2050, according to the International Energy Outlook 2019 of the U.S. Energy Information Administration.

Crude oil captures a large tranche of the global energy sector, which typically accounts for 8 to 10 per cent of the GDP, which makes crude oil an important raw material. Crude oil market is the largest commodity market in the world. Consequently, we can say that crude oil, which is also known as black gold, contributes significantly to the economy and thus supply of oil is crucial.

In 2020, the United States could become a net energy exporter and is estimated to remain so through 2050, primarily backed by the growth in production levels for crude oil, natural gas, and natural gas plant liquids (NGPL).

Moreover, as per EIA, crude oil production in the United States is estimated to continue to set annual records through 2027, with the production surpassing 14.0 million barrels per day (b/d) through 2040.

Let us take you through one Australian Securities Exchange (ASX) listed oil & gas (O&G) explorer and developer, Sun Resources NL (ASX: SUR), which is engaged in identifying O&G development asset opportunities. The company, which is based in West Perth, Western Australia, is the operator of 21754 & 21787 leases, covering 4.6 square kilometres, in Breton Sound Area in the US state of Louisiana. Its key oil project – Bowsprit – is located on the leases. 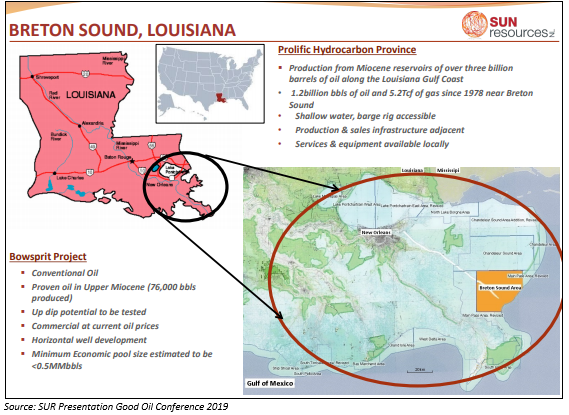 Sun Resources, in July 2019, executed a deal to acquire the 50 per cent stake owned by its equal JV partner in the project, boosting its working interest in the project to 100 per cent; however, the deal is subject to certain conditions and is yet to be completed.

The company has already identified first well at the project to start with its drilling operations, though it is subject to securing required permits and funding either through a farm-in partner or other sources.

The company has secured two of the three permits required including 1) state permit from the Department of Natural Resources Office of Coastal Management and 2) federal permit from the U.S. Army Corps of Engineers. The third and the last permit from the St. Bernard Parish is expected within the next one month. Once secured, the permits will enable the company to perform drilling activities at the well for one-year period.

Sun Resources has also appointed farm-out agents in countries including Australia/Asia and the US, to help the company in executing a farm-out deal. Currently, the company is in discussions regarding the farm-out with several interested parties.

Though factors like global shift to cleaner fuels and deteriorating economic conditions are exerting pressure on crude oil prices, oil is expected to account for a major portion of the global energy for the next several years.

Additionally, the recent announcement by Saudi Arabia's giant state oil company, Saudi Aramco, to launch an initial public offering on the Riyadh Stock Exchange is expected to fuel some stimuli to markets across the globe, and more so the O&G space. Saudi Aramco is the largest integrated oil and gas company in the world. In the first half of 2019, the company reported solid earnings and strong free cash flow, despite lower oil prices during the concerned period, with net income and free cash flow reported at $46.9 billion and $38.0 billion, respectively.

Market experts are anticipating the Aramco IPO to be the world’s largest IPO in history, valued at up to $1.7 trillion. However, the company is yet to decide on the final offer price and the number of shares to be sold.

SUR Stock Information - The stock of Sun Resources last traded at $ 0.002 on 06 November 2019. The company has a market capitalisation of $ 2.64 million, while the number of outstanding shares stands at 1.32 billion.