Western Australia-based oil & gas exploration and development company, Sun Resources NL (ASX: SUR) is completely focused on developing assets that are expected to be commercially viable in the current environment of low oil prices. The company’s key oil project is Bowsprit, located in inland waters Louisiana in the United States, ~ 70 kilometres southeast of New Orleans. SUR holds petroleum leases that cover an area of more than 1,150 acres in the Breton Sound Area in Louisiana. 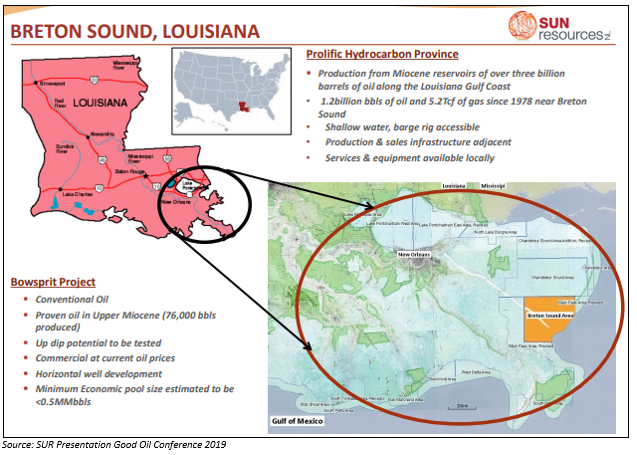 On 22 October 2019, the company shared an update with respect to its Louisiana project. Sun Resources secured the first state permit for carrying out drilling operations at the project. The approval was awarded to the company’s US subsidiary Sun Louisiana LLC by the Department of Natural Resources Office of Coastal Management.

The grant (Office of Coastal Management) follows final well site surveys performed by FensterMaker and Brammer Engineering, the SUR consultants based in Louisiana, and the submission of drilling permitting applications in September 2019.

Within the next 30-45 days (in/by December 2019), Sun Resources is expecting to secure the remaining two permits - approval from St. Bernard Parish permit and Port Authority and approval from Corps of Engineers - to start drilling an appraisal well, Bowsprit 1, into the Bowsprit field. Once all the permits are secured, they will remain valid for performing drilling activities at the project location for one year.

The company plans to drill the well in the first quarter of 2020; however, it is subject to securing funding through a combination of capital raising and farm out, for which SUR is already in talks with several interested parties.

Bowsprit Oil Project is a low CAPEX, high margin, oil appraisal development project. Sun Resources is currently is working on executing a farm out deal for the project, aimed towards raising funds to finance a portion of drilling activities and offering a near term, low cost, low risk, horizontal development well, in to proven, produced oil sand, with exploration upside.

Sun Resources plans to progress Bowsprit Oil Project to production as soon as possible, targeting to deliver value to its shareholders. The company is expecting first oil production potentially in the third quarter of 2020, with well cost estimated at USD 3.6 million and breakeven oil price of ~USD 25-30 per barrel. 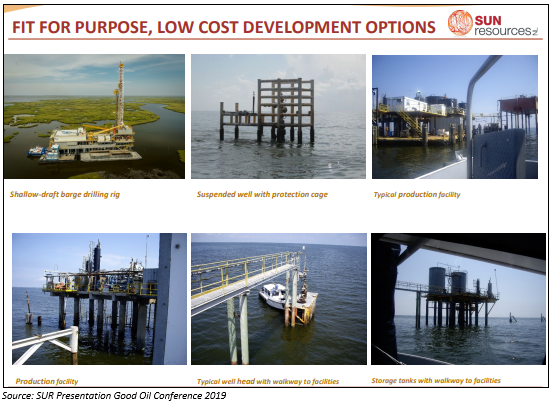 Listed on the ASX in January 1992, the conventional oil focused Sun Resources has a market cap of AUD 2.64 million. The number of outstanding shares of the company stands at 1.32 billion. On 22 October 2019 (AEST 03:03 PM), the SUR stock was trading at AUD 0.002 per share. In the last six months, the stock has delivered a positive return of 25 per cent.

CLICK HERE FOR YOUR FREE REPORT!
Tags:
News Oil and Gas SUR
All pictures are copyright to their respective owner(s).Kalkinemedia.com does not claim ownership of any of the pictures displayed on this website unless stated otherwise. Some of the images used on this website are taken from the web and are believed to be in public domain. We have used reasonable efforts to accredit the source (public domain/CC0 status) to where it was found and indicated it below the image.