Gold prices reached a record high in Australia, with Australian dollar-denominated gold spot touched the level of A$2,268.93 on 13 August 2019. The bull rally in gold prices which started from the level of A$1,655.14 (December 2018 low) is now on a hiatus.

However, despite a halt in the gold rally, the high gold prices in the international market amid demand push from central banks and global gold-backed ETFs, have benefitted the gold miners listed on the Australian Securities Exchange.

Thanks to the high gold prices in the international market, the gold miners have realised a high sale price, which in turn, has boosted the earnings of the gold miners.

One such miner on ASX is Newcrest Mining Limited (ASX: NCM). The company encashed the gold rush opportunity through higher production and higher selling price. The Cadia mine of the company, which was estimated by the market participants to cross the A$1 billion, landed above the expectation of the market.

NCM and the Market Expectation:

The market previously expected Cadia mine to touch A$1 billion, and NCM did not disappoint the market. In the status quo, the market is speculating that the company would enter into an agreement with the gold behemoth- Barrick Gold to acquire the Kalgoorlie superpit, as the Cadia mine bumper performance could be non-reproducible.

The market is also betting high on Newcrest’s recent 70 per cent acquisition of the Red Chris gold mine from the Imperial Metals Corporation.

Red Chris- a copper-gold prospect, in which NCM acquired a 70 per cent stake, is a measured, strategic move adopted by the company, as the acquisition provides the company with a footprint into a Tier 1 orebody.

As per the company, the acquisition of an interest in Red Chris supports the strategic goals of the company by providing a measured entry into the ‘Golden Triangle’ of British Columbia, Canada.

The market expectation is high over the prospect as the most prolific asset of the company- Cadia mine demonstrated somewhat similar features as Red Chris in the beginning.

Red Chris is an immediate asset, and it would provide the company immediate production with a multi-decade orebody. As per Imperial Metals estimation, the prospect holds about 20 million ounces of gold and 13 billion ounces of copper.

NCM now intends to unlock significant value from the prospect through its unique technical expertise in block caving along with operations optimisation and selective processing. The company sees promising exploration opportunities in the acquired prospect.

The higher gold prices in the international as well as in the domestic market added a substantial value, and NCM reported a Statutory profit and an Underlying profit of A$561 million, which in turn, underpinned the growth of 178 per cent and 22 per cent, respectively.

Cadia gold production for the financial year 2019 stood at 913 thousand ounces, while the copper and silver production stood at 91kt and 554koz respectively.

The flagship asset of the company generated a revenue of A$1,630 million with an AISC of A$132 per ounce of gold, which in turn generated a free cash flow of A$965 million.

Cadia mine of the company, which contributed substantially through record tonnes mined and milled, of 28.8 million and 29.3 million tonnes respectively, is now flagged by NCM to lose 8 to 16 per cent production in FY2020.

The dividend distributed by the company witnessed growth for the third consecutive year, and the total dividend for the financial year 2019 declared by the company stood at US$0.22 per share. NCM dividend policy seeks to set a balance between the company’s financial performance and capital commitments.

The company targets 10-30 per cent of the dividend payout from the free cash flow generated in a particular financial year, and with a free cash flow of A$804 million generated in FY2019, the company decided to distribute a final fully franked dividend of US$0.145 per share, which along with an interim dividend of US 7 cents would take the final divided to the level of US$0.22 per share. 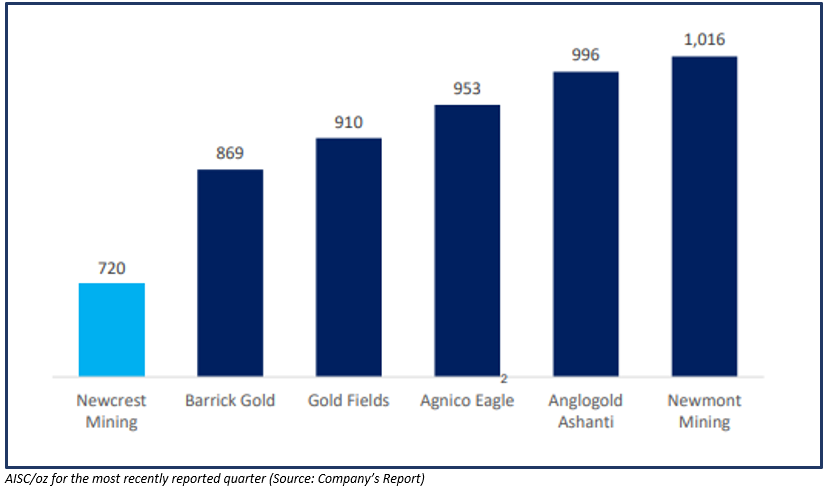 The Telfer gold production stood at the upper end of the FY2019 guidance, and the prospect produced 452 thousand ounces of gold, which in turn, underpinned a year-on-year growth of 6 per cent amid improved recovery rates from 78.9 per cent to 83.4 per cent.

The AISC of the prospect in FY2019 stood at A$1,253 per ounce, slightly lower than the pcp AISC of A$1,262 per ounce; however, the Telfer asset of the company shows the highest cost inputs or highest AISC as compared to the other assets of the company.

Despite, a high AISC of Telfer, NCM enjoyed the lowest AISC; while compared among the most recent reported quarter of many significant global gold producers such as Barrick Gold, Gold Fields, Newmont Mining, etc., the AISC of A$720 per ounce stood lowest.

Many gold miners hedge their sales through forwarding to safeguard their revenue against the volatile commodities market.

The year-wise hedge for the prospect is as:

NCM mentioned that Telfer is a large scale and low-grade mine, and its profitability along with its cash flow is very sensitive to the realise Australian Dollar gold price. During FY2019, the company realised 231,224 ounces of gold at an average price of A$1,739 per ounce.

While NCM reported a strong year, many other gold miners have also witnessed strong year or a quarter as the miners leapt with high production to take advantage of high gold prices. Many miners are still engaged in the development of their respective prospect to encash the further market estimated bull rally in the gold prices over the medium to long-term.

One such miner is Gold Road Resources Limited (ASX: GOR)

GOR reported on 15 August 2019 that the company achieved a steady-state runtime of 96 continuous hours for the comminution circuit, which in turn, denoted progress in commissioning of the jointly held Gruyere prospect.

The company processed a total of 73,590 tonnes of 1.17g/t graded ore with an average recovery rate of 94.8 per cent over the 96 hours period; and, as per the company, the throughput rate remained steady at an average of 725 tonnes per hour.

Gold Road now intends to ramp up the throughput rate with a focus to achieve high utilisation of the process plant to deliver the nameplate capacity, and the company kept the 2019 production guidance unchanged in the range of 75,000 to 100,000 ounces on a 100 per cent basis.

CLICK HERE FOR YOUR FREE REPORT!
Tags:
Mining ASX: NCM Gold Road Resources Limited (ASX: GOR)
All pictures are copyright to their respective owner(s).Kalkinemedia.com does not claim ownership of any of the pictures displayed on this website unless stated otherwise. Some of the images used on this website are taken from the web and are believed to be in public domain. We have used reasonable efforts to accredit the source (public domain/CC0 status) to where it was found and indicated it below the image.