Gold prices in Australia are knocking the heaven doors, and the Australian Government departments are estimating high exports revenue for the coming quarters. While the prices are topping the charts and high exports revenue is expected, the gold miners on the Australian Securities Exchange believe that they have just scratched the surface in Australia, when it comes to the gold production.

During a recent interview to the Australian media, the Chairman of Gold Road Resources Limited (ASX: GOR)- Tim Netscher, who is also the chairman of St Barbara Limited (ASX: SBM) was convinced that Australia holds as much gold has been mined till now.

Australia is the worldâs second largest gold producer; the country produced 315 tonnes of gold and accounted of 9 per cent of the total mine production, in 2018. While the 2018 production stood at 315 tonnes, the Australian Department of Industry, Innovation and Science anticipates the production to peak at 339 tonnes in 2019-20.

The anticipation of a peak in production volume is cordially supported through the high exploration expenditure and from new mine addition in the Australian gold production capabilities.

While the high gold prices in the domestic, as well as the international market, drove the high exploration and expenditure on it, Western Australia remained the centre of gold exploration activity in Australia.

Western Australia alone accounted for A$156 million or 71 per cent of the total gold exploration expenditure in the March 2019 quarter. 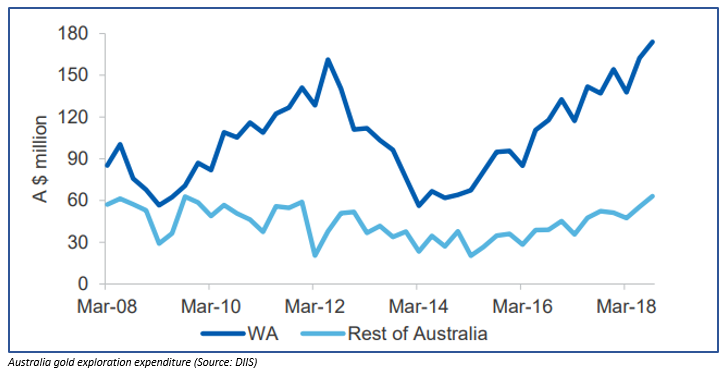 In March 2019, the total gold production reached 77 tonnes, up by 6.2 per cent on a yearly basis. The improved output from large mines in NSW and WA.

Likewise, many mines noticed a surge in the production capabilities and supported a yearly production growth of 6.2 per cent.

The DIIS expects the near-term growth in the Australian gold production capabilities amid the addition of several new mines. Gold Road Resources (ASX: GOR) Gruyere JV mine, which has an annual production capacity of 8.4 tonnes is expected to commence in the second half of 2019.

In the latest update, GOR reported that the commissioning of the final components of the process plant had been completed and the ball mill & gravity circuit is now operational.

The company kept the 2019 production guidance in the range of 75,000 to 100,000 ounces, and the company would review the cost guidance once the operations start the commercial production.

Apart from Gold Roadâs Gruyere mine, several other mines such as that of Regis Resources (ASX: RRL)- Rosemont mine & Capricorn Metalsâ (ASX: CMM) -Karlawinda gold mine, both having an annual production capacity of 3.7 tonnes and 4.0 tonnes respectively, is expected to commence in 2020.

While Australia holds excellent potential for more production and the new mines are expected to further add to the Australia gold resources. Resolute Mining Limited (ASX: RSG) is acquiring other gold companies, which could increase the production capabilities of the company ahead, and in a loop could further push the Australian production.

RSG on the Acquisition Front:

On 31 July 2019, RSG in a public announcement mentioned that the company signed a binding agreement with Toro Gold Limited to acquire all the shares of Toro Gold.

The company aimed Toro's low-cost and high-margin project in Senegal- Mako Gold Mine. The Mako Gold mine produced 15,926 ounces of gold in 2018 with an All-in Sustaining Cost (or AISC) of US$655 per ounce.

Under the terms of the agreement, RSG will acquire all the shares of Toro Gold for a total consideration of US$274 million in which US$130 million would be a cash payment and 142.5 million would be freely tradable RSG's shares at 30-days VWAP of A$1.45 (or US$144 million).

The acquisition of Toro Gold gave the company an extended footprint in Africa gold operations, and the Mako Gold Mine offers the company a low-cost private gold producing mine with a well-established 1-million-ounce open pit in the mining-friendly jurisdiction- Senegal.

RSGâs largest shareholder- ICM Limited supported the transaction; while the company funded the cash payment of US$130 million through a binding facility provided by Taurus Funds Management.

Toro Gold had a Joint Venture with ASX-listed Predictive Discovery Limited (ASX: PDI), the company welcomes RSG to the Joint Venture, in Cote dâIvoire, and the benefits of the JV now belongs to RSG.

Toro Gold, which is controlled by RSG, has six exploration permits in Cote dâIvoire and two exploration permits are under application. The Joint Venture partner of RSG (Toro)- PDI controls the Kokoumbo, Boundiali, Ferkessedougou, and Kounahiri permits, and Toro had a 70 per cent interest in it with an option to opt for 90 per cent though the completion of a Definitive Feasibility Study (or DFS) on any of the projects.

RSGâs Syama operations observed a strong performance during the quarter, and the latest acquisition provides diversification to the African production base.

Rising gold price and the acquisition front cheered the market participants over the stock of the company, which in turn, fuelled the companyâs share to the level of A$1.988 (Dayâs high on 5 Aug 2019), up by over 6.88 per cent from its previous close of A$1.860 on ASX.

In a nutshell, while the gold miners believe that Australia contains a vast amount of gold reserves buried under the national soil, the production of gold in Australia is expected to increase in 2019 amid additional capacities from the addition of new mines.

While few mines are expected to progress over time, miners such as RSG is securing more assets overseas. Which could further add external gold resources to the Australian gold supply chain and could provide the country with an impetus to emerging as the worldâs largest gold exporter by surpassing China.

China contains an abundance of gold resources, which keeps China in a firm spot at the top of the gold producerâs list; however, the ongoing environmental crackdowns on the mining sector in China could help Australia to surpass China.

However, China has witnessed some recent upgrades in the mine, which could boost its production capacities over the long-run, and few mines in Australia are reaching their life-of-mine. For now, the weighing balance of gold production is favouring China, and it would be worth tracking if Australia could surpass the country to become the worldâs largest gold producer and exporter.