Gold prices are currently showing promising recovery in prices amid global cues, which are mostly circulating around the U.S-China trade war. Gold started a rally from the level of US$1183.04 (low in October 2018) over the U.S-China trade war, which created a pessimism among the market participants over the global economic conditions.

The prices were soon supported by the supply and demand dynamics, and the prices made a high of US$1346.73 during the first quarter of the year 2019 (in February).

During the first quarter of the year 2019, the global mine production declined by almost 13.25 per cent, which in turn, created the supply concerns. On the other hand, the central bank buying along with net official buying to hedge against the U.S-China trade war inched UP the gold demand in the international market. 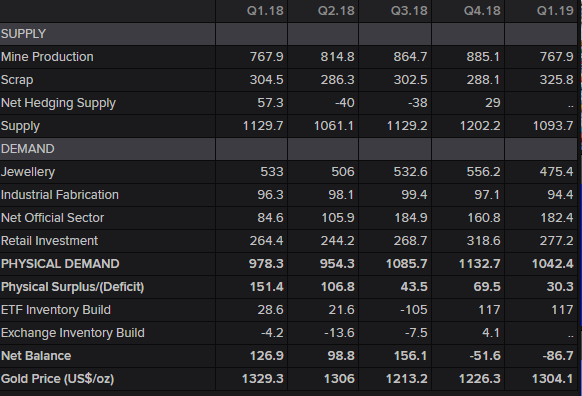 The trade dispute further encircled Mexico and the trade tiff is still going on, which in turn, is supporting the prices in May 2019 and the prices are on an up-rise in the current month as well.

On a monthly chart, the gold prices are consolidating between the points marked as 0 and 1, and the current movement is in between the two yellow lines. 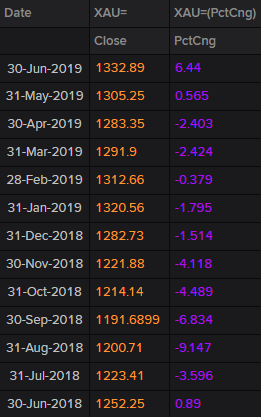 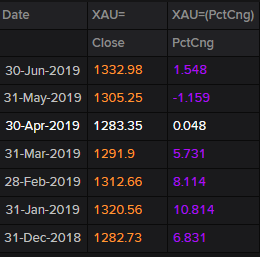 The six months return on gold stands at 3.92 per cent, with a monthly return of more than 10 per cent from December 2018 to January 2019, and a return of 1.548 per cent from May closing to the current prices.

With gold delivering promising returns, let us now look at how the gold miners performed on ASX

The company is significantly funded for its exploration and production operations. GOR is also into a 50:50 Joint Venture with Gold Fields- a proven global gold miner.

The company has significant mineral and ore resources; the total Measured, Indicated and Inferred Mineral Resources of the company stands at 155 million tonnes with an average grade of 1.32 gram per tonne of gold, which would account for 6.61 million ounces of gold.

The Total Proven & Probable Ore Reserves of the company stands at 97 million tonnes with an average grade of 1.25 gram per tonne of gold, which would account for 3.92 million ounces of gold.

Resolute Mining is among the top pioneers to make the haulage and production level LHD automatic to increase the safety of its workers, who are usually exposed to safety hazards.

As per the company, the drivers of automation include efficiency, productivity, safety and people.

One of the main drivers of automation, i.e. the productivity represents increased operational efficiency, and the ability to control the production at a steady rate along with the optimisation of the production process. 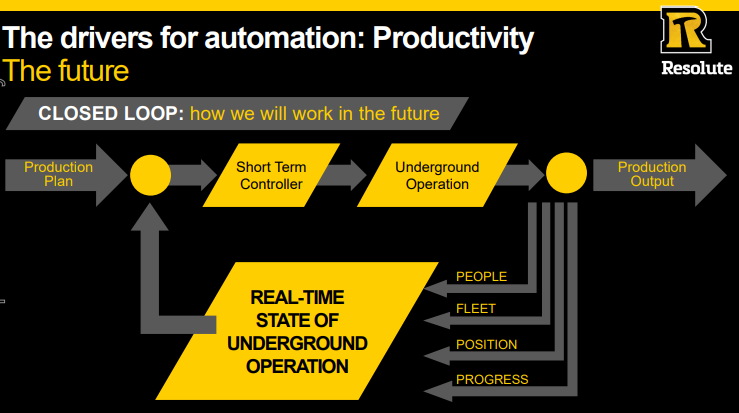 The shares of the company have delivered a YTD return of -2.18 per cent, and the yearly returns stands at - 9.68 per cent. However, the six months return on the stock is positive at 17.28 per cent, while the monthly return stands at 1.82 per cent.

The company recently raised equity capital for the acquisition of the Moose River prospect of Atlantic Gold in two stages and revised its production guidance for the financial year 2019.

The operating business portfolio of the company includes Leonora operations which host the company’s significant Gwalia Mine, containing 1.9 million of Ore Reserves with an average grade of 7.5 gram a tonne of gold. The other operation of St Barbara is Simberi, where the company is currently conducting operations on the Mining Licence 136.

RRL is a A$2.5 billion company, which holds 7.9 million ounces of Mineral Resources and 4.1 million ounces of Ore Reserves. The company has distributed about A$367 million since 2013 as \dividend until the previous quarter.

The company operates at the position of number three in Australia in terms of AISC per ounce, right after Evolution Mining (ASX: EVN) and OceanaGold (ASX:OGC) .

To overcome the challenge of replacing mined ore, the company relies on high exploration and operates on strong margins. 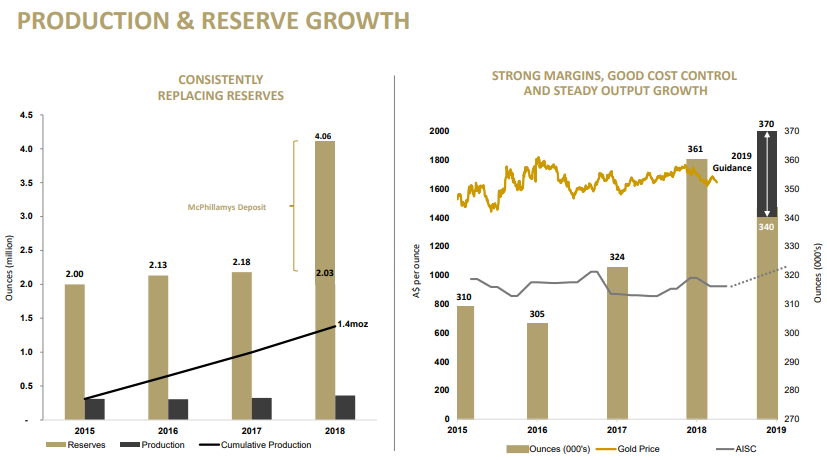 The overall production of the company is consistent from previous three quarters. 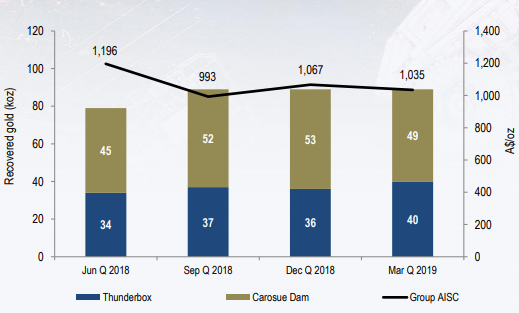 The Ore Reserves of the company are consistently building since the year 2014 and is on its way to reach the level of 4 million ounces. 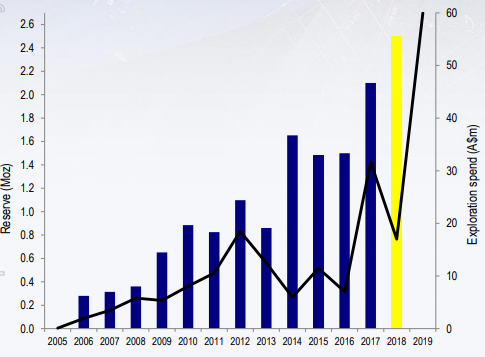 The shares of the company delivered a return of 12.03 per cent on YTD and a yearly return of 53.05 per cent. The six months return on the company stands at 29.37 per cent, while the monthly return is at 18.98 per cent.

The company produced 942-kilo ounces of gold from the Cowal prospect since the acquisition in the year 2015 with a net cash flow of A$483 million. High exploration activities of the company increased the mine life in Cowal by eight years, and the life of mine inched up from the year 2024 to the year 2032.

NCM entirely holds one of Australia’s most extensive gold operations- Cadia Valley in New South Wales, in which the Ore Reserves are recorded at 22 million ounces of gold and 4.3 million tonnes of copper.

Such a high Ore Reserve makes Newcrest a significant gold miner on ASX.

RMS is adding value for the shareholders by acquisition and efficient mining, which provides the company with an additional mine life. The company operates two significant Australian production centres- Mt Magnet and Edna May.

RMS acquired the Edna May mine from the Evolution Mining Limited (ASX: EVN) in the year 2017 for a consideration of A$38.4 million, and since the acquisition, the company has produced 137,700 ounces of gold with an average AISC of A$1,219 per ounce.

The shares of the company delivered a return of 81.63 per cent on YTD basis and a yearly return of 61.82 per cent. The six-month return on the company stands at 117.07 per cent, while the monthly return is at 14.84 per cent.

As per the company’s estimation, the grades at the Raleigh Underground mine are as:

The company progressed over the underground mine development throughout the March 2019 quarter, and the figures of ore bodies are as:

The company’s highest margin gold project is still under construction, and the company intends to produce more than 300,000 ounces of gold in the first twelve months post the completion of the development. WAF is West Africa’s emerging gold producer, listed on ASX.

The company’s business portfolio contains various projects such as Sanbrado Gold Project, which is 30 per cent completed and contains multiple deposits.

The figures of M1 south deposit are as: 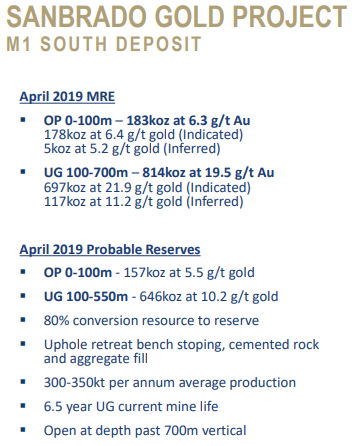 The future plan for the underdevelopment project is as: 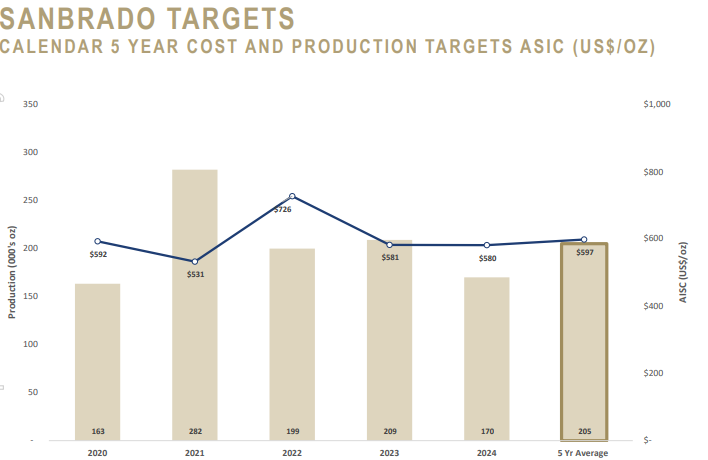