The benchmark index S&P/ASX 200 was trading downward by 0.25% or 16.5 points to 6,713.5 on 10th December 2019 (AEST 12:52 PM). In the below article, we have discussed ASX listed stocks operating in the energy, industrials, financials and health care sectors. Companies in discussion are Worley Limited, McMillan Shakespeare Limited, AUB Group Limited and Estia Health Limited, which have recently updated the market with significant announcements.

Let us zoom our lens on these company updates.

Worley Limited (ASX: WOR) provides professional services to its customers in order to help them meet the changing needs related to energy, chemicals and resources.

WOR, through a release dated 9th December 2019, announced to have entered into a joint venture (JV) agreement with the Atomic Energy Development Agency of the Republic of Uzbekistan, also known as Uzatom. The agency is advancing an initiative targeted towards the construction of a nuclear power plant in the country. The plant with two reactor units would have a total capacity of 2.4 gigawatts.

On the same day, the company updated the market with another significant announcement. Under an agreement from Sasol South Africa (Pty) Ltd as one of the engineering contractor partners, Worley would provide services to the Secunda Synfuels facility.

Do Read: How Worley experienced a transition phase in the past few months?

McMillan Shakespeare Limited (ASX: MMS) is in the business of salary packaging, asset management, vehicle finance, insurance and warranty. On 9th December 2019, the company announced that Mitsubishi UFJ Financial Group, Inc. became a substantial holder in MMS with a voting power of 5.00%.

McMillan Shakespeare, on the same day, also released a financial year 2020 (FY20) trading performance update, under which the company unveiled that it is experiencing more challenging market conditions in Australia, New Zealand and the United Kingdom (UK) than anticipated. MMS is expecting these conditions as well as adverse impact on business and consumer confidence to persist for at least in the remaining period of FY20.

Additional highlights from the update are as follows:

In another update, the company announced that Robin Jane Low, one of AUB directors, made a change to holdings in AUB by acquiring 2,060 ordinary shares in consideration of $12.1630 on 18th November 2019. Post change, the director holds 17,535 ordinary shares.

Do Read: A guide on three ASX-listed financial companies.

Estia Health Limited (ASX: EHE), engaged in the provisioning of residential aged care homes in Australia, has a market capitalisation of $644.89 million as on 10th December 2019. 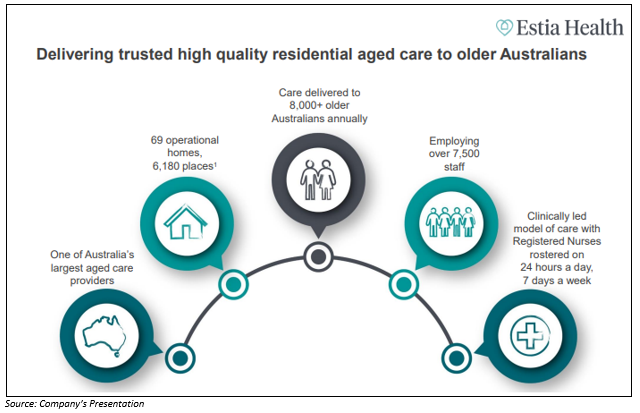 Update on Occupancy and Trading