Kaiser Reef Limited (ASX: KAU) announces identification of priority gold targets for the upcoming drilling program at the flagship Stuart Town Gold project. The Company with the assistance of Resource Potentials Pty Ltd has identified and prioritised the targets from the recently completed airborne geophysical survey.

The targets indicate potential for large scale gold mineralisation located within the Kaiser’s exploration ground. The wholly owned gold project is strategically placed in the neighbourhood of the largest gold mining operations such as Newcrest’s Cadia as well as mega gold discoveries such as Alkane’s Boda prospect within the Lachlan Fold Belt.

The Stuart Town mining centre has the potential to host large-scale gold mining prospects. The tenements under the Stuart Town project will be tested for large gold-copper porphyry systems and McPhillamys lode style gold resources. 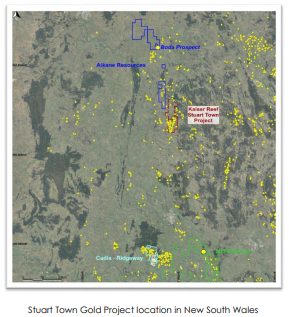 The initial prospects which have been identified are as follows- 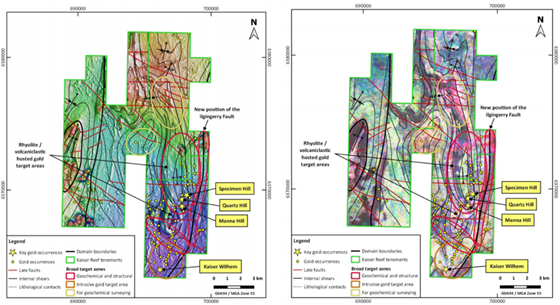 Insights from the airborne magnetic and radiometric survey

The exploration modelling is based on the geophysical results as well as the site observations. The massive intrusions hosted various gold mining operations historically and are interpreted to be structurally controlled and enclosed within the compromised rocks.

Additionally, KAU also completed the airborne survey which helped to identify variations in deposit types and the changes due to hydrothermal alteration leading to detecting the most prospective rocks.

Radiometric information may further assist in identification of halos and alterations for highlighting the underlying systems during the drilling program. The Stuart Town mining district held over 80 mining operations with a cumulative recorded production of ~170,000 ounces of Gold.

Kaiser Reef observed the similarity of the Stuart Town mineralisation with the high-grade Bodangora Gold Mine, which is just 3 kilometres southwest of the much-discussed Alkane’s Boda prospect. The associated sulphide is interpreted to be held within the rhyolite units which are derived from underlying acid igneous intrusion.

Kaiser expects that planned relaxation in the current restrictions will accelerate the progress of the Stuart Town project amidst COVID-19 pandemic. Kaiser Reef is committed towards the health, safety and environment of employees, vendors and the local community and is taking measures to ensure the same.

Kaiser Reef: an emergence of a unique junior with attractive portfolios: Click Here

The Way Forward: Advancing to the Drilling Programme

The Company anticipates continuing the systematically planned exploration program of which portion of field mapping and identification of target areas has been done. The further steps include a drilling programme which is currently being planned and is under discussion with the drilling contractors. With some approval requirement pending for now, Kaiser plans to advance to drilling as soon as possible.