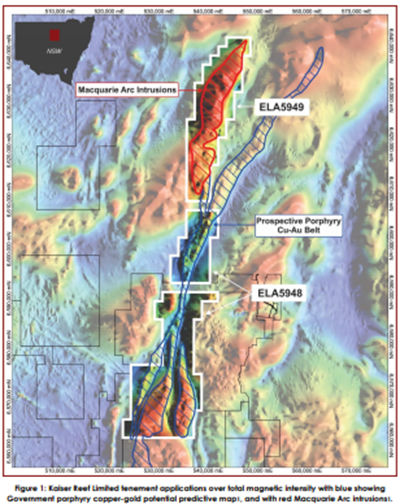 Another Masterstroke in the Tier 1 Mining Region

The exploration license spreads along the strike length of over 80 kilometres. To the south of Macquarie North - Major projects by Kincora Copper Australia Pty Ltd and FMG Resources Pty Ltd are located. The target deposit has been identified as igneous rocks with intrusions of gold and copper mineralisation and have been submerged by sediments of varying deposits.

Kaiser identifies the project as a greenfield project with minimum historic exploration which is surprising given that it is located within the Tier 1 mining region of Lachlan Fold Belt with least project associated risk.

Kaiser acknowledges that a project of substantial prospectivity as the Macquarie Arc located in the one of the global mining centres remains untested and plans to utilise the gold exploration expertise gained from the Stuart Town gold project on the prospects in future. Kaiser expects the grant of the exploration licenses in the due course. A larger portfolio of project will enable the Gold explorer to diversify, minimise risks and maximise the value generation potential.

To read more on the Kaiser Reef’s position in the Lachlan Fold Belt: Click Here

The au courant audiences must know that the Lachlan Fold Belt houses one of Australia’s largest and lowest cost Gold Copper operations, the Newcrest mining’s Cadia Ridgeway operations which produced over 913,000 ounces of Gold along with 91 kilo tonnes of Copper at an All-in Sustaining Cost of $132 an ounce of Gold last year.

The Lachlan Fold belt has been recognised across industry for the copper gold porphyry, leading to major discoveries such as Alkane’s Boda drill intersecting 689m with 0.46g/t gold, 0.19% copper, 402 metres downhole.

Though Stuart Town gold project still remains the focus of Kaiser Reef, the explorer identifies the Macquarie North project as a greenfield project and would progress to exploring the prospect as and when possible given the company’s commitment to the Stuart Town.