In the latest development, KRR has drafted a conceptual development plan for a potentially long mine life, supported by the large deposit size of Speewah.

With the development of its Speewah project, KRR is targeting the expansion of its specialty metals focus to become a high purity vanadium pentoxide and titanium dioxide producer.

Located in the Kimberley region of Western Australia, the Speewah deposit comprises a Measured, Indicated and Inferred Mineral Resource of 4,712 million tonnes at 0.3% V2O5, 3.3% TiO2 and 14.7% Fe (reported at a 0.23% V2O5 cut-off grade from the Central, Buckman and Red Hill deposits).

The ASX-listed firm’s conceptual development plan is an open-cut mining operation on the Central Vanadium deposit, which outcrops, is fresh rock from near the surface and has shallow dipping geometry with a low strip ratio of 0.4.

The operation is scaled at 5Mtpa of feed to an on-site processing plant, aiming production of a high-grade magnetite concentrate for export. The exported concentrates could then be refined overseas by salt and reduction roast methodology to target V2O5, TiO2 and iron co-products. 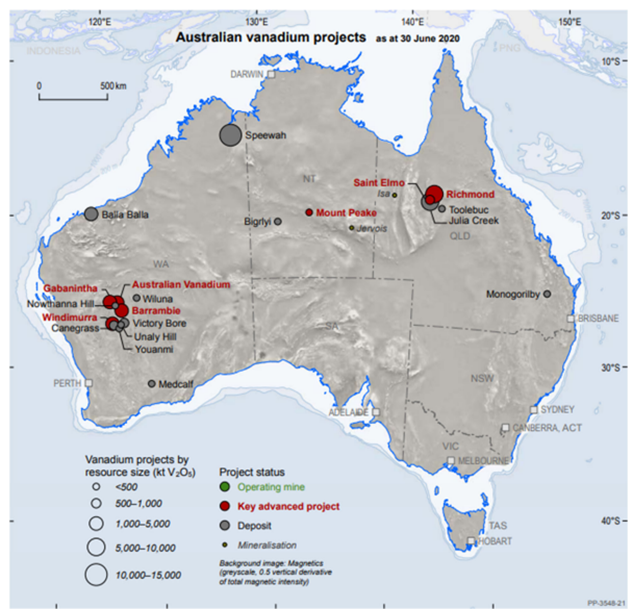 An outline of the process

As per the conceptual development plan, a high-grade vanadium-bearing magnetite concentrate will be produced from the high grade (HG) zone of the Central Vanadium deposit. This will be done through crushing, grinding and magnetic separation.

Also, a magnetite concentrate with grades of 2.15-2.64% V2O5 will be produced using the beneficiation process. Notably, the grades are higher than other Australian vanadium deposits. It is mainly because of very high V concentration in the magnetite crystal that reduces gradually upwards in the deposit. As a result, a smaller mass of concentrate could be processed to deliver the targeted V2O5 product.

Murdoch University Hydrometallurgy Research Group is carrying out metallurgical investigations for developing an optimised process flow sheet for producing high purity V2O5, TiO2 and iron metal. This is being done using trialing oxidative and reductive roast techniques, such as the use of hydrogen as a reductant.

During the already completed salt roast tests, the company has got vanadium extractions of up to 92% from high-grade vanadium bearing magnetite concentrate.