The gold spot prices are rising swiftly with gold reaching USD 1,779.61 per ounce (intraday high on 24 June) to surpass its previous seven-year high of USD 1,765.94 per ounce. The gush in gold prices is now coming as good tidings, and many of ASX-listed gold mining companies such as Ramelius Resources Limited (ASX:RMS), AngloGold Ashanti Limited (ASX:AGG), Evolution Mining Limited (ASX:EVN) are surging on back of positive sentiments on the exchange.

The rally in gold is now prompting local miners to fast track asset development and undergo exploration over high investment inflow into the gold sector, in order to take advantage of high gold prices across the global front.

In the middle of a rush for gold, ASX-listed gold stocks are shining brighter, and a majority of them along with some ASX-listed iron ore mining companies are among the top performers of the year so far.

To Know More, Do Read: A Glimpse Over ASX-Listed Top Performing Mining Stocks

In the recent past, the stock witnessed a spike in prices with the announcement of an upgraded quarterly and yearly production guidance on 24 June, and since then, the stock is trading under slight pressure but is able to uphold the price near the previously established peak. 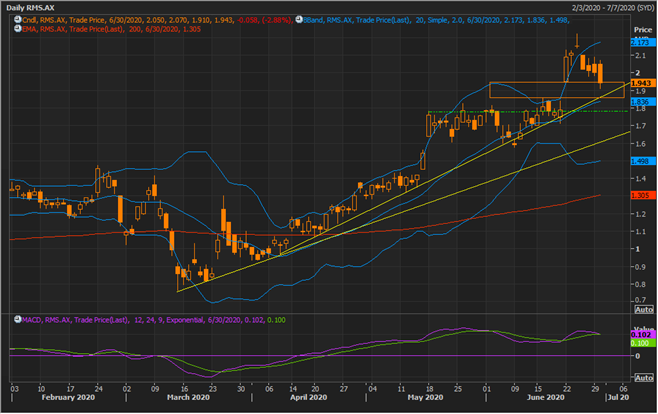 On the daily chart, it could be seen that the stock is trading in an uptrend and had recently witnessed a runaway gap (marked with a rectangle) to give a volatility breakout with prices crossing the +2 Standard Deviation of the 20-day simple Bollinger band.

However, the stock was unable to sustain the volatility break, and prices quickly retracted inside the +2 SD to retest the runaway gap. As per various academic research, ideally, the upper line of the breakout (lower end of the rectangle) should act as immediate support for the stock; however, if the stock fills the gap, the mean value of the Bollinger could act as a support.

Furthermore, the support zone for the stock is between the two trendlines, one of which has been adjusted for intraday movement and a slight steep rise.

The high of the recent spike along with the +2 SD of the Bollinger band should act as resistance for the stock. 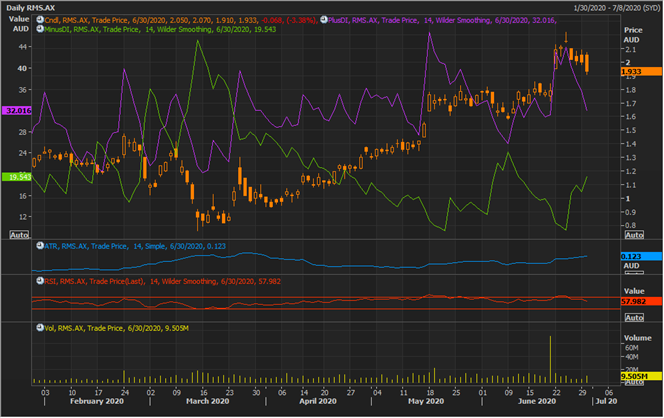 On further following the daily chart, it could be seen that the distance between the plus Directional Index (or DI) and minus DI is quite large, suggesting that the stock has been in a strong momentum so far. But now, the slope of both DI+ and DI- is moving towards each other, which coupled with a negative signal from the 12,24,9 MACD indicator reflects the current price correction.

Furthermore, volumes of the declining candles are now slowly picking up. The future direction of the stock would depend upon its ability to breach the resistance or its inability to do so. 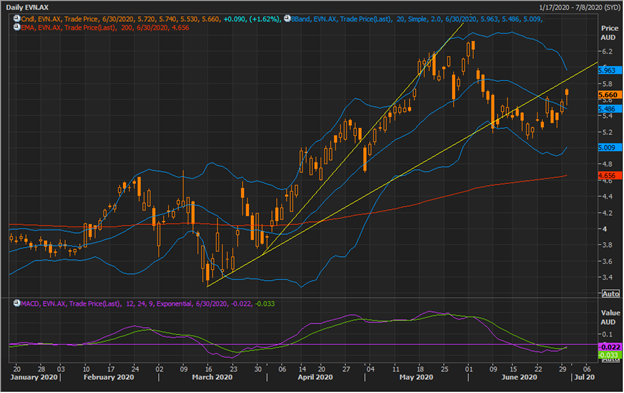 On the daily chart, EVN is now climbing the ladder swiftly with prices testing its medium-term resistance trendline. Previously, the stock broke down from its steeper trendline and faced the resistance of the same, post which the stock plunged to test the flatter trendline.

The stock even slipped below the flatter trendline but remained within the -2 SD of the 20-day simple Bollinger band. Now the stock has revised towards the mean of the Bollinger and is moving ahead to test the projected trendline.

The primary trend of the stock remains an uptrend as prices are trading above the 200-day exponential moving average. 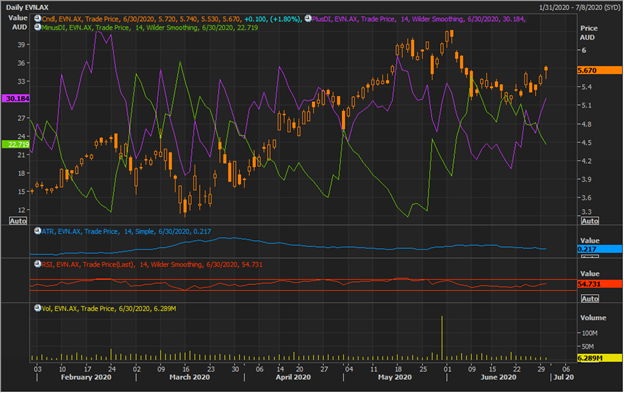 On further following the daily timeframe, it could be seen that the plus DI and minus DI are now giving a positive cross with plus DI crossing minus DI from below, reflecting that bullish sentiment prevailed, and the stock remained in upside momentum.

The pair of plus DI and minus DI also gave a negative signal in the recent past; however, both lines failed to distance each other apart considerably over bullish sentiments. Furthermore, it should also be noticed that post a negative cross between the DI pairs, the stock fell on very weak volumes, which further reflected upon the strength of bulls.

At present, the 14-day Relative Strength Index is trading above the mean value of 50 and below the overbought zone, which further suggests that the stock has some steam left to test the resistance, and break above the same or failure to do so would decide further price direction.