The zones identified from its recent RAB geochemistry program exhibit significant associations with gold and associated key pathfinder elements As-Cu-Zn-Bi-Se, many of which correspond with prospective shear zones that are known to host the historical Cox’s Find gold mine.

Historical production from this mine over 80 years ago, produced 77,000 gold ounces at a grade of around 21g/t. Recent drilling by Great Southern confirmed that remnant ore exists in the underground workings. Not surprising given they old timers left everything below 12 g/t.

With multiple drill intersections recording ounce gold results, one which was over 5m thick and only 130 m below surface. Even a 4 1/2 ounce (143 grams per tonne) hit. It is not surprising they are keen to get back drilling.

The identified anomalies are labelled as A to H in the figure below: 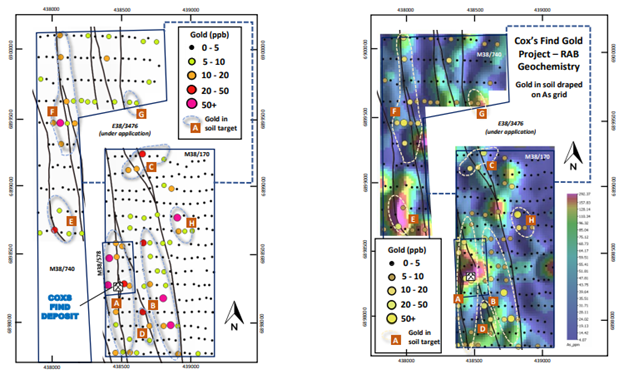 Anomaly A is a 1,000-metre-long anomalous zone centred around the Cox’s Find historical mine, extending along the major Cox’s Find Shear, to the north and south that parallels with the N-S trending lithology which presently hosts the recognized mine ore body. Another extensive Anomaly is B. This anomalous zone is coincident along and between two closely bounding major shear structures within the host cox’s Find lithology.

Add another 6 to the list and they have some work to do which they have indicated should be soon.

Objectives of the Geochemical Program

Cox’s Find is a flagship project of Great Southern Mining Limited and is a shear hosted Archaean orogenic gold deposit located in the world-renowned gold district of Laverton in Western Australia.

With a focus on testing for a number of shear-related preliminary targets that may indicate blind mineralisation at depth, the survey established the direct relation of trace elements with the alteration at Cox’s Find to show a metal enrichment in the saprolite above the orebody, interpreted to have resulted from dispersion from the underlying mineralisation.

GSN’s executive chairman John Terpu commented that “Following our successful maiden drilling program, structural modelling, geophysics and RAB program we believe we now have more information than anyone has ever gathered on this ultra-high grade deposit. The RAB program is the final piece of the puzzle and we are excited that the results not only align with the structural targets we have identified but have also highlighted some additional targets we can explore. We now have the information to design highly targeted drilling programs over the coming months and look forward to getting back into the field and exploring this historical ultra-high-grade deposit.”

While the results from the geochemical program reinforce the interpreted current structural model and controlling shear zones within the mine area, they also offer significant potential for additions to the current mineralisation at Cox’s Find and the prospect of additional near-mine gold discoveries within blind targets that have little to no exploration drilling to date.

GSN is currently engaged in developing geological, structural and mineralisation knowledge of the project area and looks forward to designing several high priority targets, subsequent to the integration of all the results received from the geochemical program discussed above.

Cox’s Find isn’t the only prospective project in GSN’s portfolio of gold assets. The Company is continuing its developmental activities North Queensland with the completion of the Hyperspectral Survey at its Edinburgh Park Project co-funded by Evolution Mining Limited. The results are highly encouraging and show similar signatures and analogues to Evolution’s Mt Carlton Gold Mine less than 20km to the south.