Based in South Yarra, advanced gold explorer Alice Queen Limited (ASX: AQX) is focused on several exploration and mining opportunities in its domestic market. The company, which got publicly listed on the Australian Stock Exchange in September 2004, has major projects located in Queensland and New South Wales, Australia.

Recently on 7 October 2019, the company announced to have concluded an infill soil and rock chip geochemical sampling program across its flagship project - Horn Island. The program completion boosted the existing coverage by 1.8 kilometres to the northwest from the Horn Island gold resource and historic mining centre to the Naboo surface gold geochemical anomaly zone. The program was completed as part of an earn-in and joint venture agreement (EIJVA) executed between AQX and St Barbara Limited (ASX: SBM) that was announced to the market in June 2019. SBM is a mid-tier gold producer, based in Australia. 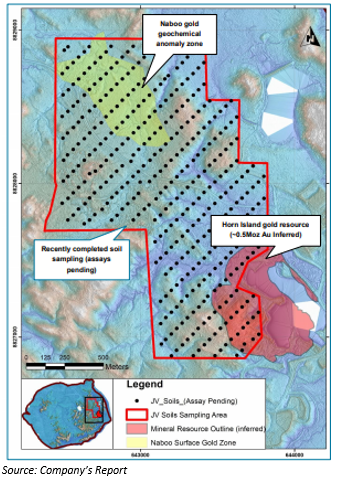 While conducting the program, Alice Queen also noted encouraging observations from the rock chip sampling of outcropping quartz vein occurrences, which aided several fundamental features that potentially outline extension of the hydrothermal system from the currently defined gold resource at the project.

The three features have been discussed below: 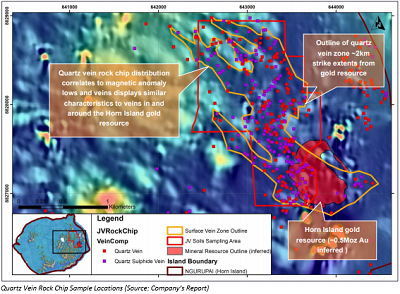 As the company is awaiting final assay results from the infill geochemical survey program, Alice Queen intends to shortly start a ground dipole-dipole induced polarisation (DDIP) survey program. A contract related to the survey, which would be covered over the area of extensive quartz veining in addition to recent geochemical surveying, has been awarded to Fender Geophysics Pty Ltd, with Resources Potentials Pty Ltd serving as an independent geophysical consultant.

The DDIP survey would be targeted towards the identification of near surface to deeply occurring chargeability anomalies that are expected to have resulted from sulphide minerals (associated with gold mineralisation). Anticipated completion of the DDIP survey program is approximately 32 days. 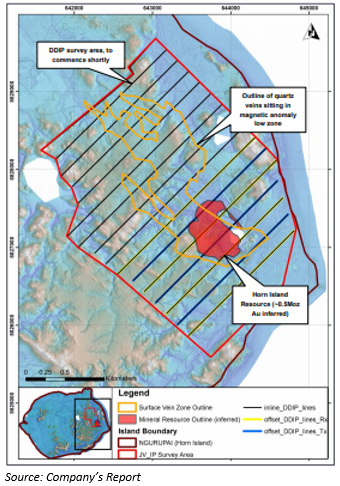 Following the completion of the DDIP survey, the joint venture technical group of Alice Queen Limited and St Barbara Limited will be tasked with the following activities:

In June 2019, the EIJVA was entered between St Barbara Limited and Kauraru Gold Pty Ltd, an 84.5 per cent owned subsidiary of Alice Queen Limited. As part of the joint venture, St Barbara is required to inject funds worth $ 4 million in the project during a three-year period to earn a 70 per cent interest in the Horn Island project. The agreement between the two gold producers, however, excludes the historic Horn Island Pit area, which has an Inferred Resource (JORC 2012) of 7.9 million tonnes at the rate of 1.9 gram per tonne gold for 492,000 ounces.

The JV also excludes some other zones such as historical low-grade ore stockpiles and other historical infrastructure. More on the joint venture terms can be READ here.