The company’s senior management has had a long history of discovering and developing mining projects in Senegal. In addition to this, Senegal is also considered attractive for investment thanks to its democratic government, conducive security, access to excellent workforce and the government support for the development of the mining industry.

With an aim to become a major gold producer, Bassari Resources is focused on bringing into production the 4 high grade pits containing proven gold reserves confined within the one million-ounce Makabingui gold resource.

In the past few months, the company has made significant development in bringing this project into production.

The company on 22 October 2019 released an investor presentation, titled – “Makabingui Gold Project Toward Production and Expanding Gold Reserves”, bringing the stakeholders up to date with its project progress.

In the presentation, the company stated its investment highlights which include,

The Makabingui Gold Project is well advanced. Bassari Resources has already constructed a 300,000 TPA plant, mining camp, water dam, roads etc. The company is now planning to complete the import of equipment to upgrade the plant. The upgrade process is well underway. In addition, the company has implemented a mining plan which involves the initial mining of the high-grade pits 1 and 2.

Meanwhile, the company has reinforced a development team by the making the following appointments.

Along with the technical team, two government representatives- Roseline Carlos, Director of Mines & Geology, and Mouhamadou Moustapha Dia of the Finance Department, have been appointed to the Makabingui board to join the four Bassari appointed directors.

Besides Makabingui gold project, the company foresees much larger potential within the existing gold resource and Bassari’s land package over 60 km of strike. Bassari has an exploration permit covering the Moura permit containing highly prospective gold targets at 8 areas in the permit. Furthermore, previous Bassari drilling at Konkoutou Hill and Konkoutou North have shown significant potential. 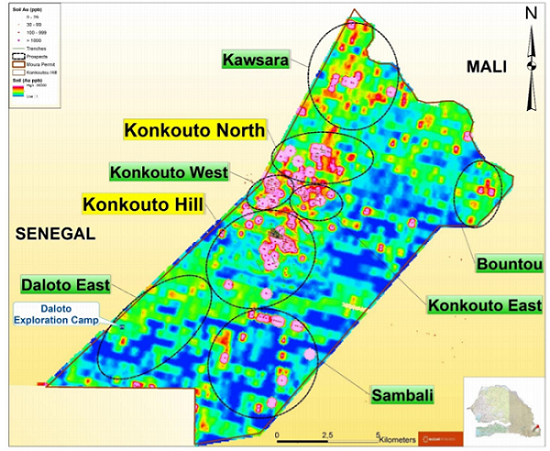 After conducting a major review of all the company’s exploration work, Structural geologists of the UK, New Resources Management Services identified the company’s 12 main anomalies and classified the anomalies in approximate size order with Konkouto (Hill, North, West and East) in the Moura permit as the largest.

Bassari Resources is taking right steps to meet its objective of becoming a major gold producer in the coming times. The company intends to use the expected cash flow generated by its operations, supplemented by investors to - Convert more of the one million ounce gold resource at Makabingui into economic mineable reserves, and convert the new gold discoveries into economic mineable reserves wherever possible.