As informed earlier by Heavy Mineral Sands (HMS) explorer, MRG Metals (ASX:MRQ), January 2020 through February 2020 will be an informative period for the first target of its highly prospective HMS projects in Mozambique, Koko Massava, where exploration to date has shown excellent results.

MRQ has been releasing promising results from the target area, demonstrating the significant lateral and vertical extent of the mineralised footprint. Currently, Aircore drilling has been conducted at Koko Massava, and after two batches of significant results, the third was announced on 3 February 2020.

Before proceeding with the latest third Aircore drilling result, we encourage you to read the first two set of results-

The Aircore holes, from a hole depth range of 24-69m, reportedly achieved an uncut (average) downhole grade range of 3.07% to 5.92% THM. The surface footprint of the zone of high-grade HMS mineralisation >5% THM is up to 7km in strike and 1.5km in width.

What Do the Results Signify?

The third laboratory data set for Aircore samples continues to deliver high-grade HMS intersections over significant lateral and vertical extent. The quantitative results continue to reflect the qualitative field analyses and support MRQ’s confidence in the significant size of the mineralised footprint of Koko Massava.

The results also highlight the robust nature of the HMS mineralisation in the target area that begins near surface and continues to the end of hole in numerous cases and validate the potential for definition of a significant HMS mineral resource.

Interestingly, Holes 19CCAC104 and 108 were collared in grades >5.0% THM, emphasizing the near-surface nature of the HMS mineralisation over broad areas.

A proud and optimistic Mr Andrew Van Der Zwan, MRQ Chairman believes that the Koko Massava exploration continues to bear fruit. He believes that the massive in scale footprint, number of holes of (average) THM over 5% from surface along with the multiple holes with more higher-grade zones bear the potential to confirm substantial tonnage of highest grade THM- future drilling at Koko Massava and feed well into the Mineral Resource Estimation process.

He mentioned that it is important to recognize the exploration timing. The Company’s Corridor Central and Corridor South properties have just begun the exploration and the early exploration has generated significant results (in both THM grade and scale at Koko Massava).

This has catalysed MRQ’s ability to focus on looking for high grade tonnage at other targets and proving a high-grade resource at the Koko Massava target. 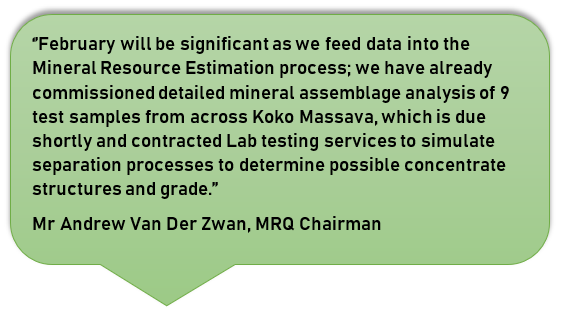 What’s Next in MRQ’s Pipeline?

There is a high likelihood that the majority of additional laboratory results returned as Aircore Batch 4 (holes 19CCAC149-160) and Batch 5 (holes 19CCAC161-185) will exceed the field visual estimated THM% grades.

MRQ’s activities are now focused on infill Aircore drilling as required to optimise the mineral resource study. The Hand Auger extension of the mineralised footprint with the aim to identify further high-grade zones is underway. The Company is likely to report an update on the Auger drill process shortly.

MRQ Delivers 180% in the past six months

The MRQ stock, which settled the day’s trade at $0.011 on 3 February 2020, has generated impressive returns to its shareholders. In the past three months, it has delivered 133.33% and in the past six months, returns have been 180%.

With more advances at the Koko Massava target expected in the coming few weeks, the Company is on the right path to explore for economic deposits of HMS in the mineral-rich Mozambique region.