MRG Metals Limited (ASX:MRQ) acknowledges the growing demand of Heavy Mineral Sands (HMS) and its economic importance as non-metallic and metallic raw materials alike. HMS are traded globally as bulk and bagged minerals and find optimum usage in paint and chemical, aerospace, foundry and electricity-oriented industries, to name a few.

Currently, MRQ is exploring for economic deposits of HMS in the southern part of Mozambique. In the Quarter ending 31 December 2019, activities were focussed within the Corridor Central (6620L) and Corridor South (6621L) tenements, part of the recently acquired and highly prospective HMS projects, where exploration to date has shown excellent results.

TO READ ABOUT DEVELOPMENTS AT KOKO MASSAVA, READ HERE.

On 20 January 2020, the Company released another set of promising results from the Koko Massava target, MRQ’s first target at the Project area, located in the Corridor Central tenement. The results are once again highly significant and further demonstrates the significant lateral and vertical extent of the mineralised footprint.

Before proceeding, we encourage you to read the ASSAY RESULTS OF THE FIRST BATCH.

The second set of results are for a batch of 267 samples from a total of 15 Aircore holes (19CCAC120 to 19CCAC134). They underpin the substantial potential for definition of a large tonnage and high-grade HMS resource.

The Aircore samples were analysed by Perth-based Western GeoLabs for heavy liquid separation, where they were primarily oven dried and disaggregated, weighed and then split to approximately 100g sub-samples. Post this, the sub-sample was wetted, attritioned and screened at +1mm to remove and measure oversize percent. Post this, it was subjected to heavy liquid separation with tetrabromoethane.

Let us look at the significant results of the second batch: 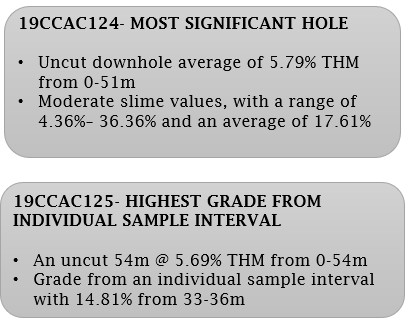 What Do The Results Signify?

The second (of four) batch of laboratory assay results highlight the robust nature of the HMS mineralisation in the target area that begins near surface and persists to the end of hole in several cases. Moreover, the surface footprint of the zone of high-grade HMS mineralisation is expected to be expanded with the third and fourth batches of Aircore assays.

The assay results from the 15 Aircore holes confirm and consistently exceed the field visual estimations. The level and location of grades from surface to depth supports a massive mineralized footprint as well as very good early indications of substantial tonnage of accessible high-grade zones.

The laboratory results further authenticate the potential for definition of a substantial HMS mineral resource.

What to Expect in the Forthcoming Weeks? 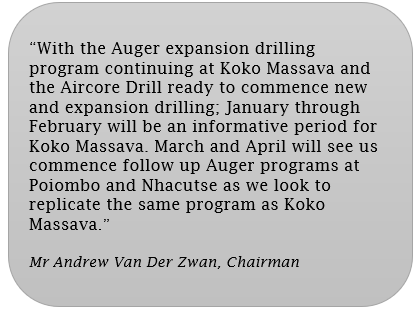 Currently, the data set of the first and second Aircore batches, the surface footprint of the zone of high-grade HMS mineralisation >5% THM is up to 4km in strike and 1.5km in width. This is expected to be expanded with the third and fourth batches of Aircore assay.

Currently, MRQ awaits the assay results from the remaining 59 holes, which are all currently in the Perth Lab for processing.

Some of the next holes to be assayed showed significant visual estimates of THM and if the assay results continue to validate the visual estimates then the profile of the potential resource will become clearer as many of the holes achieved excellent results throughout and some remained open, at high grade, at depth.

A resource estimation process is due to commence in February to potentially identify additional high-grade material to add to the mix and analyse the consistent occurrence on a number of the holes assayed to date (at depths below 50 metres).

MRQ’s focus during the Mineral Resource Study will be not only on establishing a large resource base, but also on identifying high grade/high confidence zones that may be of immediate economic interest to optimize a Scoping Study later in 2020.

With progresses made diligently and timely, the Company’s efforts will continue to expand the footprint with a clear emphasis on identifying large high-grade zones.