A mineral explorer listed on the ASX since 2011 and headquartered in Ballarat, MRG Metals Limited (ASX: MRQ) lately has been focussed on exploring for Heavy Mineral Sands (HMS) in a world-class HMS location, Mozambique.

In 2019, the Company acquired a highly prospective HMS Project in Mozambique, where exploration to date has shown excellent results. MRQ is focussed on this Project to an extent that all other Australian projects have been relinquished.

Why Did MRQ Select HMS?

On a global scale, HMS holds crucial economic importance as non-metallic and metallic raw materials alike. They are ideally located in tropical and sub-tropical countries and are traded globally as bulk and bagged minerals. The mineral sands industry involves mining HMS identified in fossil beach and river environments, which are primarily exploited for their titanium and zircon content.

Titanium minerals/titanium feedstocks include ilmenite, rutile and leucoxene. Ilemenite can be further refined to manufacture feedstocks with a higher titanium dioxide (TiO2) content (like synthetic rutile and high Titania slag). Zircon, a comparatively smaller part of the HM group draws a higher price than titanium feedstocks, which provides a substantial financial contribution to mineral sands operations.

Heavy minerals are used in the manufacture of very important construction and industrial products. Few heavy minerals are not easily replaced and are exclusively available in a few countries, which makes them both valuable and rare.

On 7 November 2018, MRQ announced that it had agreed to acquire the Mozambique HMS project. Regarding the acquisition, the Company purchased all the shares from the shareholders - in Trophosys Pty Ltd and in Sofala Resources Pty Ltd. Trophosys and Sofala include the Mozambique Company which holds the approved HMS assets in Mozambique. These highly prospective HMS exploration projects are: 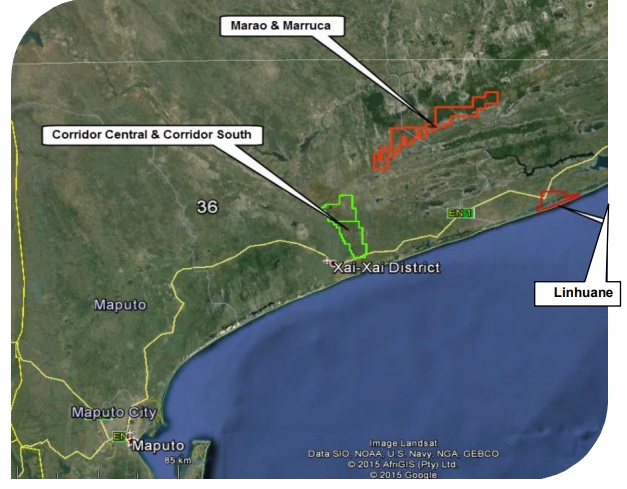 Recent Developments at the HMS Project

In April 2019, MRQ commenced an airborne survey by the contractor, Geotech. The final production flight was completed on 7 April 2019. The interpretation of airborne magnetic data has defined discrete and large anomalies up to 3 km x 0.5 km on the Corridor Central tenement and 9 km x 1 km on the Corridor South tenement that occur within more diffuse and broader areas of anomalism. Overall, there are at least 13 TMI-AS anomalies interpreted from the data that require testing.

In May and June, MRQ focussed on the Corridor Central tenement, stating that magnetic anomalism correlates with areas where historic drill results show high grade HMS mineralisation, as well as with the radiometric anomalism in that area. Several historic drill holes with high grade total heavy mineral (THM) were drilled over a discrete high intensity TMI-AS peak within TMI-AS Anomaly 1. However, the most coherent and extensive anomalism, that occurs to the southwest and north of TMI-AS Anomaly 1, remains untested.

The significant extent of near surface anomalism strongly suggests much larger zones of HMS mineralisation, with potentially higher grade THM, occur within the Corridor Central tenement.

Discussing the Corridor South tenement, an extensive linear northeast-southwest oriented anomaly, ~9km long and 1km wide dominates the TMI-AS fabric. This anomaly is interpreted to be a palaeoshoreline and appears to be a composite of at least 2 significant strandlines. However, TMI-AS Anomaly 10 remains untested by any previous drilling.

The processed airborne magnetic and radiometric data for the Corridor projects provides MRQ with a comprehensive suite of data, helping in a better understanding of the project geology. Moreover, it has identified the location of palaeogeographic coastal characteristics known to host heavy mineral sands of high grade strandline-style mineralisation.

Moving ahead and to the more recent quarter ended 30 September 2019, the Company focussed at Koko Massava, Nhacutse and Poiombo targets in Corridor Central and Corridor South tenements in Mozambique.

The recent results demonstrate the world-class regional context and confirmation of the enormous prospectivity of MRQâs HMS project. By 25 October 2019, 40 aircore holes were finished. It involved ~2071 m of drilling wherein the holes differed in depth from 33 to 75 m (average depth being 51.8 m).

On 21 November 2019, the Company released laboratory results for a batch of 246 samples, including QAQC samples, from a total of 34. Overall, the lab results indicate that

These results confirm the possibility for discovery of significant HMS mineralisation and also support the visual estimated grades for THM which was reported for aircore drilling within the target area. Lab results for the first aircore drill samples are likely to be received by November 2019 end.