In a significant development, BPH Energy Limited (ASX:BPH) investee Cortical Dynamics Ltd has confirmed the filing of a new international patent application, carrying Application No. PCT/AU2020/050535. Cortical informed that the patent application has been lodged for “Apparatus and process for measuring brain activity”. 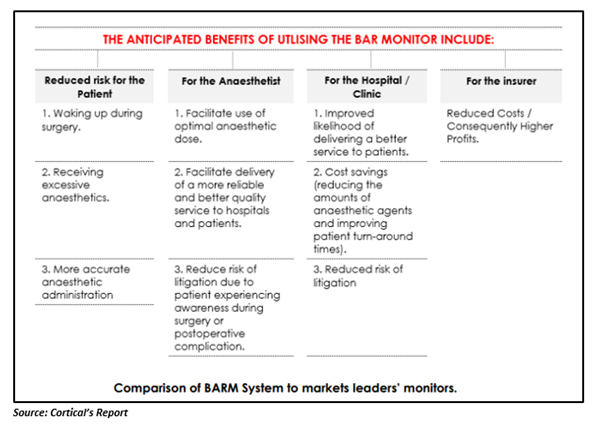 Cortical’s patents cover BARM’s uniquely defined measures - Cortical Input (CI) and Composite Cortical State (CCS), that have been recognised by the world’s leading experts in anaesthesia. While CCS measures the consciousness level of the patient under anaesthetic, CI measures analgesia or pain input received by the brain.

Currently, Cortical has patents awarded in Japan, the People’s Republic of China, Australia, New Zealand, the United States and Europe.

The strength of Cortical’s patents has been demonstrated several times in the past when the Company’s prior patents work were cited by various countries’ patent offices in Cortical’s later patent sequence.

As per Cortical, the arising Intellectual property (IP) will be protected as appropriate throughout the commercialisation process to retain Cortical’s potent competitive position.

BARM to be Exhibited in Korea

Cortical’s BARM is set to be presented at the 2020 Spring Development seminar and Council of the Korean Association of Anaesthesia. The Korean Anaesthetic Conference is scheduled to be held at the BEXCO Convention Hall in Busan South Korea on 24th and 25th July 2020.

Cortical lately notified that its Korean distributor, Globaluck will exhibit BARM at the conference. Both Globaluck and Cortical are presently in the concluding phase of the Korean regulatory approval process for BARM with the Korean Ministry of Food and Drug Safety.

To recall, Globaluck attained a certificate of approval for BARM from the KGMP (Korea Good Manufacturing Practice) in September last year.

According to Cortical, its BARM system is fundamentally different from its competitive technologies in various ways, including: