Given the above-market conditions, we would review two technology stocks - Maestrano Group PLC (LON: MNO) & IDE Group Holdings (LON: IDE). Based on the 1-year performance MNO and IDE were up by about 410.00 percent and 1.96 percent, respectively (as on 4 August 2020 before the market close at 2:20 PM GMT+1). Let's skim the financial and operational updates of the companies to understand the stock better.

Maestrano Group PLC is a UK based company that provides a cloud-based platform for business data management and analytics. The Company mainly caters to the transport sector. Nextcore a subsiaidary of the Company manufactures light direction and ranging (LiDAR) enabled UAV drone that has application in the digital survey. Maestrano Group is included on the FTSE AIM All-Share index.

1-Year Chart as on August-4-2020, before the market close (Source: Refinitiv, Thomson Reuters)

The Company remains confident over the contract opportunities in the pipeline, and the existing contracts would continue until FY21. The acquisition of Airsight has provided robust synergies for the Company, and it is positive over the collaboration with Meitetsu for the machine learning tool. The Company's technologies would have application in Japanese rail network on successful completion of the pilot project. Maestrano Group is also focused on increasing the distribution network of Nextcore.

IDE Group Holdings PLC is a UK based IT solution provider and the Company offers services such as Cloud & Hosting, Network & Connectivity, Collaboration, Managed Services and Device Management. IDE Group is included in FTSE AIM-All Share.

In FY19, the Company reported revenue of £28.2 million, which declined from £41.1 million in FY18. The lower revenue in FY19 was mainly due to lower project services revenue of £4.9 million and loss of customer contracts worth £3.7 million. The gross profit was £6.4 million, and adjusted EBITDA was £1.1 million in FY19, both gross profit and adjusted EBITDA benefitted by £0.2 million and £1.1 million, respectively due to adoption of IFRSE-16. The Company reported an after-tax loss from operations of £8.5 million. Under the business category, Manage division reported revenue of £14.7 million, whereas Connect division reported revenue of £14.6 million in FY19. The Company received funding of £11.5 million through the issue of notes for six-years to existing shareholders that were used for debt repayment of National Westminster Bank. As on 31 December 2019, IDE Group had cash of £0.7 million and did not have external debt on the balance sheet. During FY19, the Company won a few new clients in the public sector through the partner channels. On 1 June 2020, the IDE Group completed the acquisition of Nimoveri Holdings Limited for £200,000 of which £100,000 was paid in cash and £100,000 as interest-free secured loan redeemable on 31 December 2021. Nimoveri Holdings is an IT services and cloud firm. 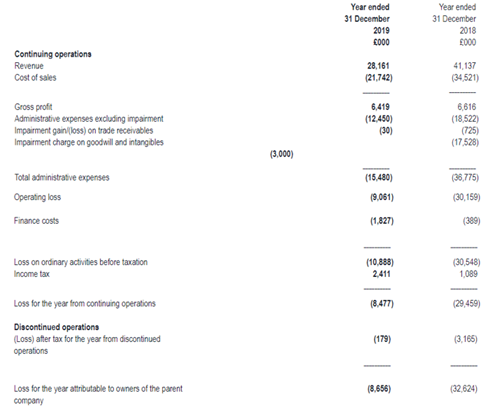 1-Year Chart as on August-4-2020, before the market close (Source: Refinitiv, Thomson Reuters)

The Company is mainly inclined towards customer retention and providing quality service. IDE Group does not have any external debt on the balance sheet, and thus it is confident about the liquidity position. The Company refrained from providing any guidance over short or medium-term following the current economic situation and believes that it is difficult to assess the impact. The Company availed the government facilities to defer the PAYE and VAT payments. In FY20, the Company would focus on cost mitigation and data centre and network consolidation.