With growing dependence on information technology, the requirement of cyber protection has increased nowadays. With the evolution of artificial intelligence, individuals are dependent on technology for every common aspect of their lives. The technology, however, requires huge data related to every kind of information for individuals. Thus, the IT companies, including the artificial intelligence service provider businesses, require protecting their databases from any cyber threats. We will be discussing four businesses which work in the cyber risk advisory services.

Whitehawk Limited offers solutions related to cyber risk advisory services. The company operates through internet-based cybersecurity marketplace where clients can take advice on their cybersecurity needs and be matched to vendor products.

Guidance: As per the Management guidance, the business will focus on maximizing execution on three current U.S. government CIO contracts during Q4FY19 and throughout 2020, following work initiation. The company will further look to mature current 360 Cyber Risk Framework proposal conversations with Defense Industrial Base companies and target to deliver one or two new contracts during Q42019. The company is planning to enhance its WhiteHawk 360 Cyber Risk Framework within the U.S. Defense Industrial Base. The product offers solutions for identifying, prioritizing and mitigating cyber risks across the defense industrial base.

FY19 Financial Highlights for the period ended 30 June 2019: SEN declared its annual report wherein the company reported revenue of $21.3 million, up 12.3% on y-o-y basis stood better than the industry growth, aided by Increasing global awareness of cyber security concerns. The business reported growth in both sales and maintenance revenue, primarily in Europe. Revenue from Thales was up 15.8% on y-o-y basis. During the year, the company confirmed Thales as the exclusive global distribution partner after its acquisition of Gemalto.

FY19 tax expense includes a Research & Development credit of $1.40 million as compared to FY18 R&D rebate of $2.05 million. Recurring maintenance revenue represents ~40% of the total revenue. The company reported operating profit before tax of $3.86 million which excludes the impairment to the investment in Smart Antenna Technologies & share of Votiro loss.Net loss after tax during the period FY19 came in at $0.46 million as compared to a net profit of $1.955 million in FY18. SEN reported gross margin of 78% in FY19 as compared to 81% in previous financial year. The company reported decent progress in Votiro, which is in line with expectations and good progress being made in building distribution relationships and sales capability.

The business reported strong balance sheet with $17.86 million of cash in hand and zero debt. 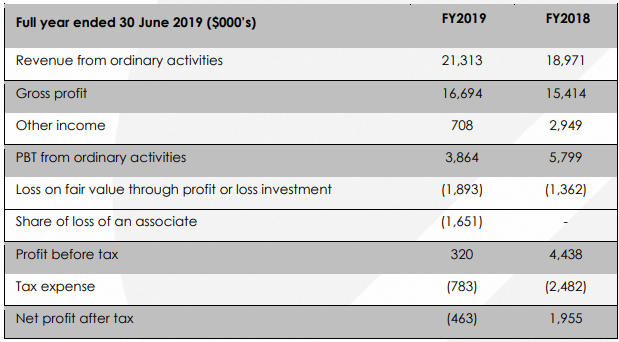 Outlook: As per the management guidance, the company will be looking for innovation for their existing products suite with transport layer independence and virtual technologies and several other revenue opportunities. The Management is positive from its recent investment in Votiro and expects that the CDR technology is likely to grow at a decent pace in the future.

As per the recent market update, the company reported the following business highlights relating to the business expansion in the US Markets which are summed up as follows:

Prophecy International Holdings Limited is engaged in designing, development and marketing of computer software applications and services aimed at the worldwide corporate marketplace.