A Glimpse at Earnings Performance of Stocks- Z1P, SPZ, SEN via FY19 results

Investors sentiment is directly hit by the earnings performance of companies, as their investing behaviour and stock selection depends on the financials, growth and stability that companies post.

Let us look at 3 ASX-listed companies, who have recently released their financial stance on 26 August 2019:

A leading player in the digital retail finance and payments industry, Zip Co Limited (ASX: Z1P) had a historic day on 26 August 2019 as it notified on an initial issuance, the largest (by nature) via a Fintech in Australia. Pleasingly, Z1P stated that it had registered a significant achievement, as it had priced its first issuance from the Zip Master Trust.

A cherry on the cake was the significantly oversubscribed stance of the deal which was arranged by National Australia Bank Limited (ASX: NAB). The deal closed at $500 million, representing an upsize on the original $400 million compulsion. The settlement on the deal is anticipated on 5 September 2019.

Further, on 22 August 2019, the company released its full year results for the year ended 30 June 2019, stating that it had recorded a revenue of $84.2 million, zoomed up by 138 per cent, annualising at over $100 million. The transaction volume soared by 108 per cent and Loan book (receivables) of $682.6 million were up by 115 per cent. The company had over 1.3 million customers and 16,000 partners in its kitty. The cash EBTDA stood at $9.2 million in FY19. Also, net costs including of $54.4 million was raised by the company via an oversubscribed capital raising. Also, Z1P launched the Zip App and announced the acquisition of the global technology platform PartPay. The customer receivables were up by 115 per cent from $316.7 million recorded on 30 June 2018 to the amount of $682.6 million as noted on 30 June 2019. 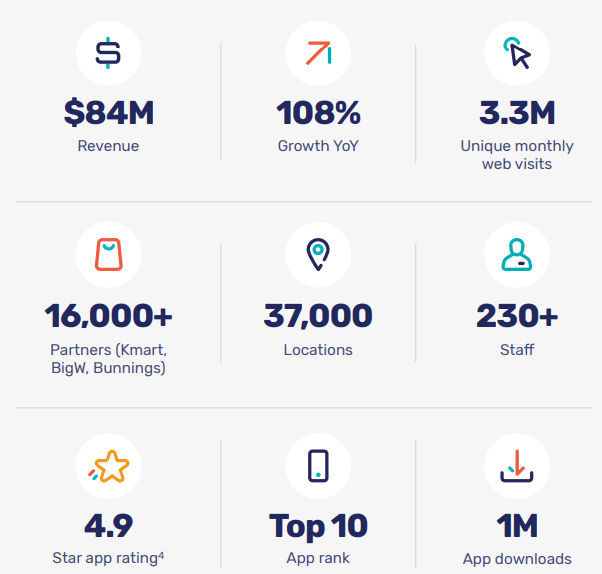 On the outlook front, the company would target 2.5 million customers with an active Zip account and $2.2 billion in annualised transaction volume. The global reach would be enhanced, as the company plans to grow PartPayâs market share in NZ and launch in the UK.

A car parking technology company, Smart Parking Limited (ASX: SPZ) released its preliminary final report for the year ended 30 June 2019 on 26 August 2019. The total revenue of $27.2 million for FY19 was down by 12 per cent with the net statutory loss after tax attributable to members of $2.6 million, down by 255 per cent on FY18. The Adjusted EBITDA was recorded of $0.3 million, post adjustment of $0.7 million of unusual and non-recurring items and was down by $3.8 million on pcp.

Revenue in the Parking Management division was recorded of $21.7 million and was down by 9 per cent. The total portfolio of ANPR sites under management was 389 up from 236 sites as in pcp. 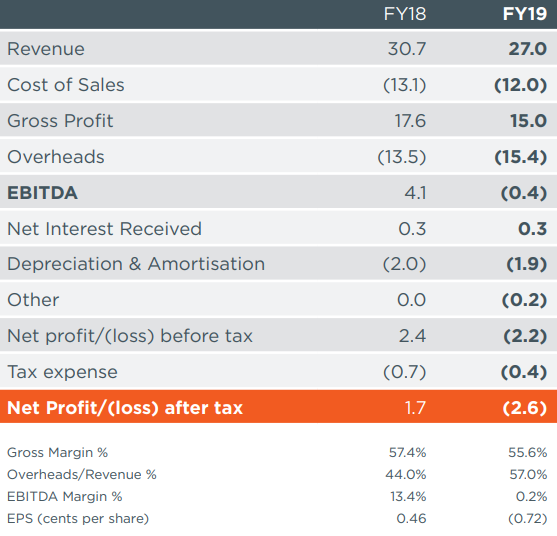 SPZ invested $1 million on product development during the period, as a result of the launch of the next generation of the Smart Cloud platform and believes that even though sales in the tech division remains slow, the momentum in the advanced parking technology market persists to grow further.

SPZâs net operating cash flow for the period stood at $0.44 million down compared to pcp and in the period. Besides, $6.4 million worth corporate bonds were converted into cash. The total cash in hand at the end of FY19 was recorded of $10.5 million.

On the outlook front, the company looks forward into having over 300 sites through the acquisition of additional sales resource. A revenue growth is expected in FY20 period, driven by PBNâs and site acquisition.

A global leader in the development of end-to-end encryption security solutions, Senetas Corporation Limited (ASX: SEN) released its Full-Year Results of FY19 on 26 August 2019, stating that it had delivered a 12.3 per cent growth in operating revenue of $21.31 million. Gross margin of 78 per cent was lower to the prior year reflecting increased sales of 100Gbps encryptors. Post exceeding $20 million of operating revenue for FY19, the company would no longer be eligible for the refundable R&D rebate. Operating profit before tax was at $3.86 million and the Net loss after tax was $0.46 million.

During the year, Thales confirmed itself as the companyâs global distribution partner after its acquisition of Gemalto, representing an encouraged customer engagement.

The first A$5.65 million tranche of SENâs investment into Votiro was paid on completion in November 2018. The company had no debt at the end of the year and had $17.86 million of cash at 30 June 2019, post $6.62 million of payments related to the Votiro investment.

Driven by the net loss after tax, the company informed that it would pay a distribution to shareholders for FY2019 of $0.000462 per share, subject to shareholder approval which would be decided in the AGM, to be held on 22 November 2019. If approved, the payment would be made on 13 December 2019.

Further on the outlook front, the company plans to launch products in FY2020 after completion of a number of successful trials.

On 27 August 2019, (at AEST 12:38 PM) the above discussed stocks depicted the below described positioning:

CLICK HERE FOR YOUR FREE REPORT!
Tags:
News Z1P SEN SPZ
All pictures are copyright to their respective owner(s).Kalkinemedia.com does not claim ownership of any of the pictures displayed on this website unless stated otherwise. Some of the images used on this website are taken from the web and are believed to be in public domain. We have used reasonable efforts to accredit the source (public domain/CC0 status) to where it was found and indicated it below the image.