Amidst the contemplation on the growth of the medicinal cannabis space in Australia, the legalisation of medicinal cannabis is expected to contribute approximately $8.5 million in the nationâs state and federal tax. The utilisation of this amount towards concepts of health, environment and education is paramount.

With evolving times, where modernisation has taken a toll over taboos like cannabis, the global business is undergoing a massive transition to procure advantages from every sector possible. Cannabis, better expressed as a cannabinoid drug by The Alcohol and Drug Foundation, is the product of the sativa plant which has psychoactive cannabinoid THC and non-psychoactive cannabidiol.

Used for recreational and medicinal purposes, cannabis has been a debatable product since time immemorial. However, with legalisation in Canada, Uruguay, North Korea and Alaska, more countries like Malaysia, Thailand, Singapore and Australia are making significant progress to reap benefits of Cannabis.

Cannabis in the Aussie Land

Australia has made notable progress in the medicinal Cannabis field and took the world by surprise after it joined the bandwagon of the few countries to have legalised medicinal cannabis in the country in February 2016. With this advancement came in a tide of investments, booming businesses, global relations and employment opportunities. But the health sector was the most impacted, and positively. The medicinal cannabis is believed to possess traits that cure critical ailments like Cancer, AIDS, cancer, PTSD, depression, epilepsy and seizures. The list goes on, and research and development are being conducted across medical companies and centres to gain more insight on the subject.

The success and acceptance of the legalisation of medicinal cannabis has broken trivia revolving around the use of cannabis for recreational purposes, which remains to be an illegal act, but is doing a fair round of debates amid public and private agencies of the country.

The Australian cannabis market is expected to have a net worth of approximately $55 million by the end of 2025.

Latest Updates in The Cannabis Space

Undoubtedly, the cannabis market is booming in Australia, and is here to stay. With the stock market welcoming international investors to invest in âPot Stocksâ and the country involving in global trade relations, it is safe to say that Australia is a strong contender in the field of medicinal cannabis.

Let us have a look at the latest buzz in the Cannabis sphere:

Taking the Cannabis baton in its hands is a domestic cannabis player Althea Group (ASX: AGH), which announced its leap into the worldâs benchmark and one of the largest cannabis markets, Canada. AGH is in the process of buying a Canadian recreational cannabis company, Peak Processing Solutions, which is focussed on the extraction, production and processing of edibles, drinks and cosmetics imbibed with cannabis.

This is an icing on the cake for AGH on a global trade level, as it has recently been granted an import license in the UK and has opened one of the UKâs first cannabis destination clinics (MyAccess Clinics) in London and is most likely to open two more in Q319.

Capital Raising: Moreover, the company is in advanced negotiations for a probable JV to step into the Portugal market and had announced a capital raising worth A$30 million (which would settle on 8 August 2019) to fund the Peak acquisition July 2019, which is expected to be complete in September 2019, and expand current and future growth initiatives.

Use of funds in case the acquisition proceeds (Source: AGHâs report)

June 2019 Quarterly Update: As per its June 2019 Quarterly Activities report, the company had Unaudited sales of $411,663, soared up by 226 per cent on a Q-o-Q basis. 225 Healthcare Professionals had been prescribed with AGHâs medicinal cannabis products, an average increase of 127 per cent on a M-o-M basis. 1,334 patients had been prescribed these products (as of 23 July) with an end of June average M-o-M increase of 144 per cent. 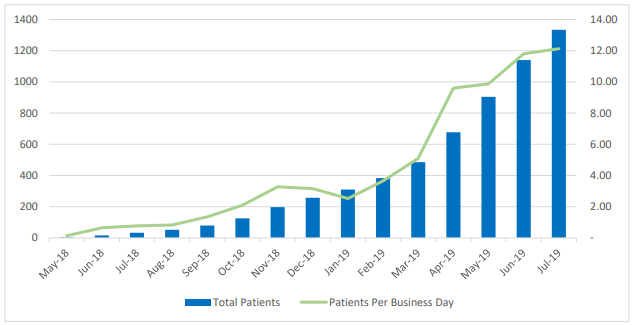 In the UK sphere, AGH Launched Althea Concierge UK for medical education and clinical evidence purposes and received its first patient prescription for medicinal cannabis. AGH had been selected to supply medicinal cannabis with a target of 20,000 patients.

A SAFE Banking Act for Pot Stocks in the coming times?

Banks are into disciplined and stern business. Given the federal illegality clouds hovering in the Cannabis space, banks are often reluctant to work with marjiuana players to save themselves from issues like money laundering. Hence, the cash-only cannabis operations are vulnerable to fall prey to criminal acts. With the steady yet massive growth in the Cannabis sector, which is expected by many experts to generate a profit of more than $22 billion for both the recreational and medical markets by 2022, banks are stepping into the âhighâ business.

A Secure And Fair Enforcement (SAFE) Banking Act is the latest proposed legislation which is aimed towards the prevention of federal banking regulators from sanctioning banks to link with legal cannabis businesses, while safeguarding criminal acts. The Senate Committee on Banking, Housing and Urban Affairs would hear from the representatives of the cannabis and financial services industries regarding the much-anticipated Act, as market enthusiasts await such developments.

Adding on to the progress report on Australian Cannabis Business is a health products and supplements player, BOD Australia Limited (ASX: BDA), which had a momentous growth of 273 per cent on a M-o-M basis (June-July 2019) in its 5% CBD MediCabilisâ ¢ productâs prescriptions volumes. In June and July 2019, 220 prescriptions had been fulfilled, up by 55 per cent when compared from January to May, with repeat prescriptions.

The company expects a sustained growth over coming months, while it pursues international expansion opportunities for the product, which treats pain, stress, anxiety and neurological disorders. The company has witnessed a considerable acceptance through its recent distribution agreement with Burleigh Heads Cannabis and its partner firm, Cannabis Doctors Australia.

Amid the traction in the Cannabis market, accoladed firm, farm manger and agtech company CropLogic Limited (ASX: CLI) announced a JV with the Shephard Brothers, who are well-versed Oregonian agriculturalists. As per the JV, the parties would grow premium CBD hemp trimmed flower, which is believed to deliver greater returns than hemp biomass.

CLI would implement its agricultural skill set and agtech over an additional 16.6 acres of premium hemp, which is specially cultivated to grow the trimmed CBD flower. The Shephard Brothers would provide acreage, shedding, labour, machining and storage. The proceeds would be divided equally, and a production in the range of 8,000 and 10,500 lbs of trimmed flower is expected out of the deal.