During the last couple of months, there has been a question in the minds of most of the investors in the market - is ASX an alternate to NASDAQ?

The Australian Stock Exchange (ASX), during 2019, made a lot of effort to ensure that foreign tech companies get listed on ASX. From 2014 till 2019 there has been an increase in the total number of ASX-listed technology company from ~95 in 2014 to ~195 in 2019. ASX is considered as a bright exchange for listed tech companies as it allows early entry to an index recognised across the globe, has main board listing and has an active network of analysts and tech brokers. 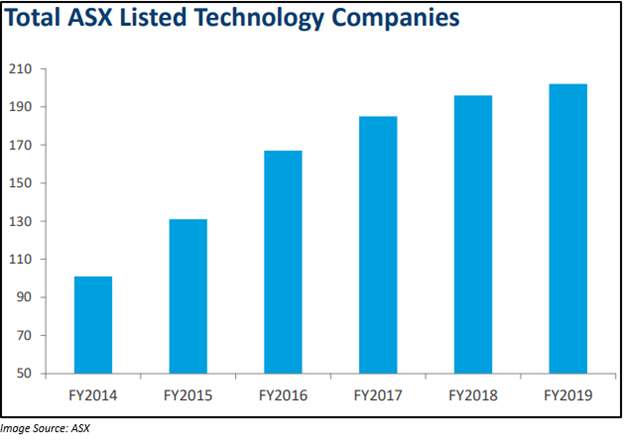 Max Cunningham, the executive general manager of listings and issuer services at the ASX, had been working for a very long time and during December 2019, revealed his plans to create an index similar to NASDAQ that would give a thrust to new companies leading to a more extensive pipeline of listings in the near future.

The efforts made by the ASX on this front have now come in the limelight as it has revealed its plan to launch the S&P/ASX All Technology Index or the S&P/ASX All Tech, at a function at the exchange in Sydney. The launch would be announced in the presence of honourable technology minister Karen Andrews and the executives from these WAAAX stocks which would be followed by a ribbon-cutting ceremony.

The new technology index would enable investors to invest in the fastest-rising segment of the market in one go. Australian investors would be able to follow and support the tech stocks that are rising with greater transparency. The new index would also give an idea about the champions & the losers in a sector growing rapidly with multiple IPOs of companies across the globe.

While NASDAQ generally attracts companies with valuations north of $1 billion, the new index would attract companies to get listed on ASX with a valuation range of tens of millions to hundreds of millions.

Another significant advantage of this new index is that the investors can keep track of the performance of the market’s fastest-growing segment without having to analyse the stocks individually. The investors would have an improved prospect to tap into the growth of the technology sector, which are beyond their technical area of skills.

Not just investors, the new technology sector would also allow smaller technology companies to develop, following the footsteps of the WAAAX stocks, and boost their respective profiles amid a wider spread of potential investors. Moreover, these small companies would be able to enhance the underlying liquidity.

Mr Cunningham had been working with S&P on the classification of companies. The new index would be as per the Global Industry Classification Standard (GICS) criteria.

The new technology index would be headed by Xero Limited (ASX:XRO). Xero is the provider of online accounting software for small businesses.

The index is going to be live from Monday, 24 February 2020, and it will be a smaller version of the Nasdaq composite index. The S&P/ASX All Technology Index (XTX) is created to be a broader, more comprehensive index than the present S&P/ASX 200 Information Technology Index.  This shows the wide range of Australian Securities Exchange-listed businesses in the technology sector.

Under the technology sector, there are 20 such companies whose market capitalisation is more than $1 billion.

In the new technology index, the top ten companies are Xero, Computershare, Afterpay, REA Group, Altium, Carsales.com, WiseTech, Link Group, Next DC and Appen. This index would comprise of 46 stocks and would be rebalanced every quarter.

The new technology index is not restricted to any specific number. In order to become a part of this index, a company must have a market cap of at least $120 million, a bare minimum of $120,000 worth of value traded daily, a minimum investable weight factor of 0.3 & a relative liquidity ratio of at least 30%.

As discussed above, ASX has made efforts to attract many foreign companies to get listed on the exchange. The efforts have turned out well, and there are tech companies from abroad on the first index. These companies include Fineos which belongs to Finland. Xero, Pushpay, and Volpara that are from New Zealand, & Livetiles and Life360 from the United States.

According to Karen Andrews, the Minister for Industry, Science and Technology, the new All Tech index would play an important role in increasing the visibility of the technology sector.

In 2019, out of the top five technology listings on the ASX, one was from Australia which was Tyro, three were from the US, and the other one was from Ireland.

The new tech index, S&P/ASX All Technology Index, would help avoid a scenario wherein a highly successful company can significantly change the dynamics of the index, by having a rule that no business can go beyond 25% of the index by weight. Further, Telco stocks would not be considered under the technology stocks after the changes to S&P's GICS classifications in September 2018, which resulted in a new sub-category of communications.

It is expected that the new index would further improve with the inclusion of newly listed tech companies like Tyro, Limeade and Nitro, which made their respective debut on the ASX in December 2019. However, as per the S&P guidelines, the organisation must have liquidity measures tracking for at least three months to be eligible. Thus, at present, these companies are absent from the index.

Inside this report you shall discover

How the price trends of gold have got it where it is With the rallying gold prices and the record buying from Central Banks, the gold spot rose from $1,655.14 (low in December 2018) to $2,322.26 (high in August 2019). A promising return of over 40 percent was seen in the year 2019. Get exclusive insights into how the trends set the foundation for the performance and how Gold stocks seem to be a safe bet when you look back.