The financial intelligence agency AUSTRAC is conducting strict inspection on the online payment-based companies in Australia. Recently, the governing body instructed Paypal Australia for an audit session for not complying with the money laundering legislation. The issue was raised for checking the reporting as per existing regulations of International Funds Transfer Instruction (IFTI). As per the above regulation, all the payments companies are bound to disclose their lists related to fund transfer, both domestic and international. Earlier this year, the regulatory body ordered another leading company, Afterpay Touch Group Limited (ASX: APT) within the online-transaction segment for an audit check regarding the same issue.

As per the website of AUSTRAC, the above audit was necessary to ensure proper compliance against Anti-Money Laundering and Counter-Terrorism Financing Act 2006 (the AML/CTF Act). As per the AML/CTF Act, the business houses are required to give details regarding child sexual exploitation and several organized crime activities to assist the governing bodies. Thus, Paypal was also required to share the list of activities related to circulation of funds through its platform. In reply to the above instructions, the Management of the Paypal informed that the company has fully abided by the guidelines of respective countries in which they have business interest. The management further clarifies that the audit was conducted due to some issues related to the company’s reporting system while the company shared the same with ASIC.

Paypal cited that they are coordinating with the AUSTRAC and will conduct the required audit process within the given time frame. While, on the other hand the company informed its customers that they can continue to use the services as before with no impact. The inspection body AUSTRAC has appointed an external auditor for the above process. The auditor is given a time horizon of 120 days to report the same.

The same situation was faced by Afterpay over its discrepancies with the compliance norms as per ALM/CTF Act. During the issue raised by the regulatory body, the company claimed that they failed to identify any activities related to money laundering and terrorism financing activities within their platform. The governing body AUSTRAC further confirmed that will maintain strict regulation regarding the ongoing activities related to anti-money laundering and counter-terrorism finance compliance issues. AUSTRAC further confirmed that they will not compromise with the national security.

As per AUSTRAC Chief Executive with the existing payment services which is conducted via online plays a critical role in determining the movement of funds within and outside the country. The governing bodies like AUSTRAC and law enforcement bodies tries to trace the anti-money laundering and criminal activities through the fund movements.

US Paypal provides an online platform where users can make payment and avail receipt during any online payment activities made by them through online wallet linked to both of the party’s bank account.

While, Afterpay offers purchasers to shop via online platforms without an upfront payment. They provide credit to the users depending upon their credit profile.

The above action by the regulatory body was resulted due to extreme pressure on them by the Royal Commission. Earlier, the Royal Commission had put an inquiry regarding ongoing misconduct across the financial sector in Australia. The Royal Commission further disclosed that, in case of any fraudulent activities the group or the person who are involved, escapes without any serious punishments.

As per the recent Management commentary, Afterpay Touch Group Limited informed that the work related to the audit is under process with several AML/CTF Programs lined-up after the notice was issued. The Management clarified that the platform allows users of small ticket sizes of around $150 on average basis while the platform does not allow any international transactions.

Afterpay commenced its business during 2015 and initially it was as a start-up and was a part of an innovative technology sector.  The sector got mature over time and got strong response by the end users, regulators and other shareholders. The management is committed to provide improved product avenues to the users. The company recognizes the essence of the step taken by the regulatory body and commits of full co-operation to them. The company also ensures that the compliance under AML/CTF remains strong.

The Management of APT highlighted regarding its FY20 guidance wherein they threw some light on the company’s mid-term strategies which included the followings: 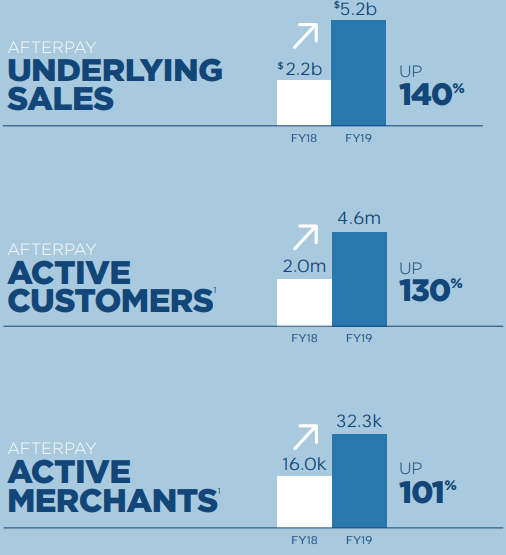 Outlook: The company expects huge potential from the millennials makeup sector and likely to constitute from 27% of the entire global population. By 2020, the millennials likely to drive highest spending approximately US$15 trillion. The company expects millennials would contribute approximately half of the salaried USA citizens. Retails market across Australia and the US is valued at $5.3 trillion, while online segment is valued at $650 billion.