Is Bellamy's Gearing Up To Touch High Levels Once Again - ASX: BAL

Speculation of Receiving SAMR accreditation shortly: Bellamy's Australia Ltd (ASX: BAL) stock has risen 34.51% in one month as on March 21, 2019 on the speculation that the company may receive SAMR accreditation shortly. This speculation is on back of the company’s plan to double the China Sales team & Marketing spend in the second half of FY 19 to increase the reach of Rebrand. The company had a strategic plan to launch in March a high impact campaign in China, for which the company had enrolled A-grade ambassadors and key opinion leaders (KOLs), that comprised of Stefanie Sun (Celebrity Singer), Zilin Zhang (Former Miss World), Niangao Mama (Renown Parenting KOL), Dr. Ding Xiang’s Wellness media (run by doctors & have 2.1 million followers) and Doctor CUI (Parenting KOL that have 10 million app users & 2.85 million WeChat followers). Moreover, the campaign will include strong selling points like 100% certified organic by ACO & NASAA, No.1 organic formula brand in Australia & No.2 Worldwide, World’s Leading DHA Level for Organic & no sugar added. As a result, the company is expecting improved and stronger trading in 2H 2019 than 1H 2019 after the official launch of rebrand product in March. The Rebrand products are expected to capture market over the 12 to 18 months’ time frame. In addition, the company has received positive feedback from the social “buzz” as the company has improved its formulations and has added DHA & GOS, which means added feature to the organic milk as well as ingredients are expected to help in eye & brain development. Meanwhile, the company is waiting to receive the SAMR accreditation, as after receiving it only the company can sell the Chinese labelled products in China and increase its earnings.

Subdued First Half of FY 19 Performance: For the first half of FY 19, on the normalized basis the company’s core business has reported 24.9% decline in the revenue to $127.7 million & 13.3% fall in the gross profit to $54.6 million compared to first half of FY 18. During the 1H FY 19, the company’s gross margin improved but EBITDA margin fell to 21% from 21.4% in 1H FY 19.  The company’s topline in 1H FY 19 got affected on the back of delay in SAMR registration, the company had planned the reduction in trade inventory (of $10 million) before the product upgrade of rebrand, and also got impacted due to the slowdown in the growth of the category, slower birth rate in China & increase in the local supply of the competitors. 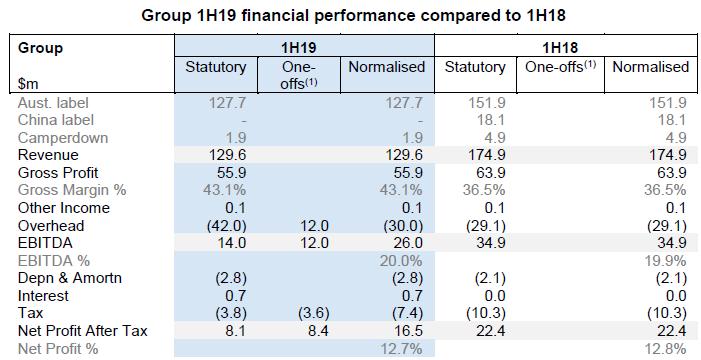 Outlook for FY 19: For FY 19, BAL has revised its outlook and expects the full year Group Revenue to be in the range of $275-$300 million compared to $329 million posted in FY 18. The projection has taken into the consideration of slow trading condition before the rebrand and during the lunar new year holiday, which is expected to improve from March after its official launch. The normalized Group EBITDA is projected to be in the range of 18-22% of revenue, which is on the back of lower projected revenue for FY 19 and increase in the investment in marketing and the China team during the second half of FY 19.