Iron ore prices surge to a 52 week high in the international market with prices of June 2020 futures reaching USD 103.59 per tonne (as on 12 June 2020) as port stocks declined across China while demand across many steelmaking provinces improved, leading to a further push in iron ore.

The iron ore inventory across 35 significant ports in China took another weekly hit of 790,000 metric tonnes (for the period ended 12 June 2020) to stand at 98.9 million metric tonnes, which marked the continuation of the inventory downtrend across China after a single week of rising (for the week ended 5 June 2020) in the past nine weeks.

However, despite another weekly fall across 35 major ports in China, the iron ore price remained lower against its recent 52-week high in China due to anti-smog measures implemented by the local government in the high steelmaking province of Tangshan.

The local government across the province implemented stringent measures, leading to the steel production cuts, which in turn, lowered the average delivery of iron ore from these ports, keeping a lid on the ongoing rally in the commodity across China.

As per the data from SMM- a local research house in China, the daily average delivery of iron ore stock declined by 6.3 per cent for the period ended 12 June 2020, as deliveries from ports in the top steelmaking hub of Tangshan almost halved in the wake of prolonged cuts across steel mills operation.

While these changes in inventory and delivery are short-term factors which eventually cumulate to dictate the long-term move, the nine-week decline in port inventories across China has led to the iron ore firming up with ASX-listed iron ore mining companies playing a major part in the supply dynamics.

The Australian iron ore supply chain took a considerable hit due to major operational challenges faced by them in the wake of COVID-19 outbreak and weather challenges posed by the tropical cyclone Damien.

Australian as well as Brazilian iron ore supply chain witnessed a major disruption over weather challenges faced by both the nations, leading to a supply shortage, which coupled with the spike in the steel production across China in April 2020, supported the ASX-listed iron ore mining stocks such as Rio Tinto Limited (ASX:RIO), BHP Group Limited (ASX:BHP) surging to multi-week highs while some such as Fortescue Metals Group Limited (ASX:FMG) reaching to a record high.

On the demand and supply counter, while the supply of iron ore remained largely under pressure during the first quarter of the year 2020, the steel production in China spiked during the month of March and surged further in April, leading to a price gush in iron ore, which, despite lower shipment from many ASX-listed iron ore mining companies, supported their stock price on the exchange.

While on the demand counter, the demand for high-quality iron ore in China remained strong during the first quarter of the year, especially in March 2020, when the local Chinese steel production witnessed a U-turn.

To Know More, Do Read: China Poised to Grab the Global Steel Trade as Economies Open up for Trade 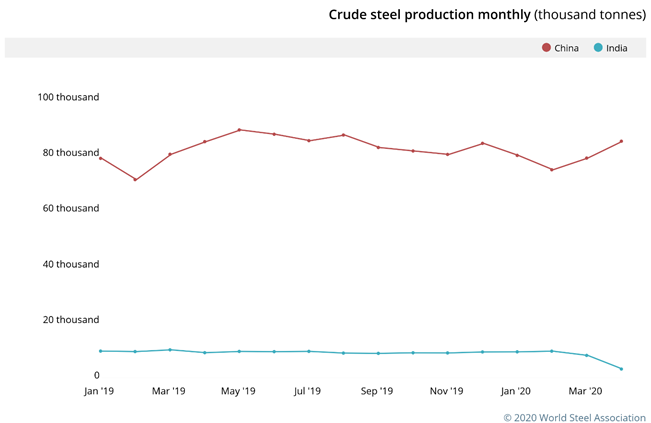 While the iron ore shipment from all major Australian iron ore exporters declined during the March 2020 quarter, many of the ASX-listed iron ore mining companies reiterated their production and shipment guidance and some like FMG even upgraded the same for the future, which is now pointing that the supply in chain would restore, and the demand factor would now play-in to dictate the future movement.

On the demand counter, the World Steel Association anticipates that the local steel demand in China would witness a unit per cent increase during the year, which coupled with the decline in inventory and stabilising steel prices across the domestic and international market might provide cushion to the iron ore price rally as well.

However, while the steel production in China is robust and is further anticipated to increase- as China bids against the global competition while galvanising the steel industry to spur the post-COVID-19 outbreak economy, the global steel demand is anticipated to shrink by 6.4 per cent, which is a potential risk factor to the ongoing rally in the iron ore price.

To summarise, the declining port inventory across China amidst supply disruption from Australia and Brazil along with the robust steel production in March and April has instigated an iron ore charter, leading to a rally in ASX-listed iron ore stocks.

While the shipment and iron ore production of Australian miners have taken a hit during the March 2020 quarter, a majority of them had reiterated the same, while some like FMG even upgrading the same, which should address the supply disruption ahead.

Furthermore, the robust steel output across China and its local consumption along with the global steel demand scenario would dictate the iron ore price move ahead.