China is witnessing a sharp recovery in the economic activities which is now supporting the view on base metals. On account of the recovery, there is a sharp decline in steel inventory across the social and steel mills in China. The price of iron ore futures on the Dalian Commodity Exchange zoomed up from the level of RMB 542.00 (intraday low on 2 April 2020) to the present 52-week high of RMB 775.50 (as on 1 June 2020), which marks a price rally of ~ 43.0 per cent.

However, recently the iron ore price corrected slightly as steel mills are now only procuring handful of the raw material as prices of iron ore above USD 100 per metric tonne is drawing down their profit margins. Iron ore is currently at RMB 753.00 (3 June 2020 settlement price) in China on DCE.

China Car and Heavy Vehicle Sales Back on Track

Recently, the China Association of Automobile Manufacturers (or CAAM) reported that the sales of automobile in China surged by 11.7 per cent in May 2020 against the previous corresponding period to stand at 2.14 million units.

On a monthly basis, the automobile sales increased by 3.2 per cent while registering a year-on-year increase of 4.4 per cent, which marked the first rise in 22 months.

However, the heavy truck sales for May remained 8.5 per cent down against the previous month record high of 191,200 units.

The decline in the domestic steel inventory across China, which previously supported the iron ore price, is continuing to do so with social inventories of long steel, including both HRC and rebar, declining across Guangzhou provinces with a fall of 4.19 per cent (as on 3 June 2020) against the previous week.

The inventory across the large steelmaking province in China shrank by 66,900 metric tonnes to stand at 1.53 million metric tonnes.

Steel mills across China, which previously procured the steelmaking raw material quite aggressively in the wake of rising steel prices across the global market are now quite reluctant to purchase iron ore as the price of the commodity is now trading above USD 100 per metric tonne in the market, which in turn, is drawing down on the profit margins of steel mills across China. 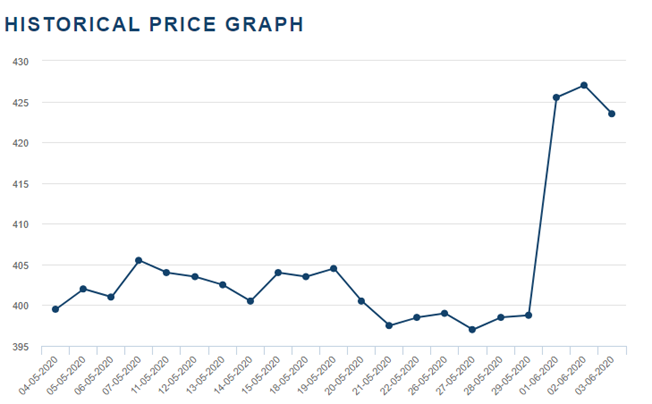 However, at present, steel prices are yet considerably high against their recent bottom, and the iron ore supply chain is restoring at a rabbit pace, which could provide some relief to steelmakers in China ahead and might improve the procuring process.

The data also suggests that iron ore leaving from the Australian ports dropped by 790,000 metric tonnes for the same period to stand at 16.63 million metric tonnes, though registered a decline on a weekly basis, remained 940,000 metric tonnes high against the previous corresponding period in 2019.

Also, the Brazilian iron ore behemoth- Vale has reiterated its year guidance and has suggested recently, that it would maintain the iron ore production guidance of 310 to 330 million metric tonnes. Likewise, for its last quarter, the Anglo-Australian miner Fortescue Metals Group Limited (ASX:FMG) had suggested that it would increase the production at the upper range of 175 million tonnes to 177 million tonnes for the financial year 2020, which would be ending in the June 2020 quarter.

In a nutshell, iron ore prices remained well supported by improving economic activities in China along with a decline in steel inventory, which prompted the local steelmakers to aggressively procure the steelmaking raw material to take advantage of spiked steel prices across the global front.

Furthermore, while the steel market is under a sentiment splash, Chinese steelmakers are now refraining themselves from any aggressive procurement due to high iron ore prices, which in the international market has spiked over USD 100 per metric tonne, leading to squeeze in operating margins, which in turn, is keeping a lid on the rally.

However, the current inventory across major Chinese ports is still shrinking with the recent settlement at 99.39 million tonnes (as on 29 May 2020), down by 1.06 per cent against the previous week, which could continue to provide cushion to the iron ore price over the near-term.

Over the long-run, the supply disruptions caused by the bad weather conditions in Brazil and Tropical Cyclone Damien in the Pilbara region now seems to be diminishing and to top it iron ore suppliers across both the nation are reiterating that they would fulfil the production guidance for the year, which might cool down the iron ore prices.