The ongoing rally in the iron ore price further backs the export earnings estimation of the Department of Industry, Innovation and Science (or DIIS) of $101 billion in 2019-2020. While the price is one factor for such strong export earnings, the rising export volumes is also contributing.

ASX-listed iron ore mining companies are pushing more and more to deliver and restore the supply chain that was hampered due to the impact of the Tropical Cyclone Damien, leading to an upsurge in export earnings.

For example, one of the leading miner- Fortescue Metals Group Limited (ASX:FMG) revised its shipment guidance from the previous upper range of 175 million tonnes to 177 million tonnes, which along with the strong market price of the commodity caused a sentiment splash in the stock, prompting it to contour a record high.

While the iron ore rally has supported the record earnings of $101 billion in 2019-20 along with substantial volume, the DIIS anticipates the iron ore export earnings to ease back going forward to stand at $72 billion by 2024-2025 as iron ore prices are projected to resume normative moment and cool-off ahead.

However, despite an anticipated decline in revenue, DIIS anticipates the export volume to hold the growth trajectory. The exploration expenditure for iron ore surged by 12 per cent to stand at $84.6 million during the December 2019 quarter amid high prices in the market. 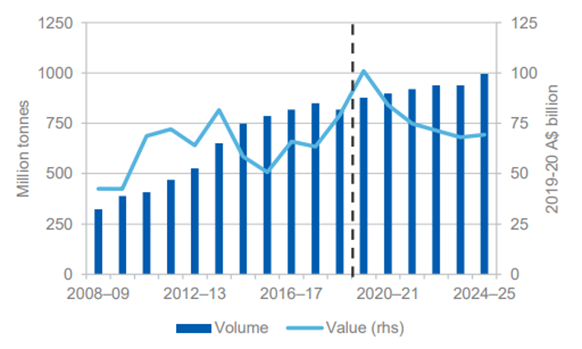 In the recent past, a top court had dismissed FMG’s appeal against the previous Federal court ruling in favour of Aboriginal community related to the land on which the Company holds the Solomon Iron Ore Mine.

DIIS suggested that the export volume would grow from 877 million tonnes (2019-2020) to reach 1.0 billion tonnes by 2024-2025, offsetting the impact of falling prices and even assisting in leading to new records for export earnings (if prices lift again over the next few years). However, the ongoing demand for amendments in laws related to such indigenous sites and Aboriginal land is a potential risk to the volume forecasts.

In the status quo, the rise in steel price across the global front combined with the decline in the domestic inventory across China, which in turn, is backing up the demand for iron ore and propelling its prices.

However, while the DIIS anticipates that the global supply chain would restore ahead and the price would ease down, the long-term outlook over steel is also in some doldrums.

The World Steel Association anticipates that the global steel demand would take a considerable hit of 6.4 per cent in 2020 with North America and Asia being the hardest hit.

However, though China is estimated to witness a 1 per cent increase in the domestic steel consumption, many industry experts anticipate that it would not be enough for restoring the steel market to its formal glory, which in turn, could exert pressure on iron ore prices over the long-run. 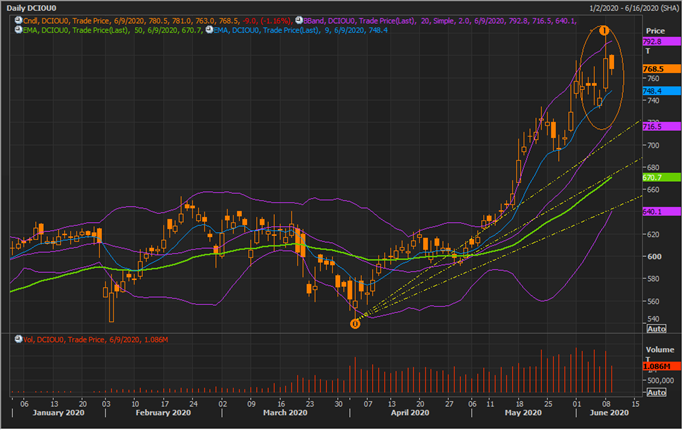 On the daily chart, it could be seen that iron ore gave a volatility breakout on 8 June 2020; however, quickly retraced to end the session below the +1 Standard Deviation of the 20-day simple Bollinger band.

At present, the price is trading above its 9-day exponential moving average (or EMA), which should act as the short-term and immediate support for the price, which is mainly due to the rapid rally in the iron ore price. The commodity is also trading above its 50-day EMA, which is itself below the 20-day simple moving average (or SMA), suggesting that the medium-term price trend is bullish in nature.

However, while the technical indicators are giving a positive signal, the price pattern of the past few trading session is unique, reflecting that the current market situation is indecisive with both bulls and bears active to dictate the future price direction.

It should be noted that after the first volatility breakout on 1 June 2020, the price closed below the +1 SD and the next trading session day went indecisive with a Doji candle. The successive two sessions were also followed by the Doji candles, reflecting an indecisive market.

However, on 5 June 2020, the price breach the low of the previous Doji candle and even closed below the same to confirm bearish sentiment, but the next trading session remained quite shocking for bears with a large bullish candle, which also failed to confirm a volatility breakout and retracted ~ 4.5 per cent from the high to close at RMB 777.50, again giving a negative impression.

But despite such impression, the price is gushing and is currently demonstrating a unique behaviour, which in the field of technical analysis is known as the shark shopping days.

To summarise, in the recent past, iron ore prices have rallied on the back of the supply crunch, which as took the iron ore export earning to $101 billion mark, which is further anticipated to cool-off ahead as the commodity enters normative movement again.

The present dual of supply shortage and recovering steel prices is keeping the demand for the raw material up; however, many industry experts and organisations such as WSA anticipate the global steel demand to take a hit.

At last, DIIS projects the export earnings, which climbed to a record high of $101 billion in 2019-2020 would now ease off to reach $75 billion. On the other hand, the supply chain is anticipated to restore ahead, and the Australian supply would increase ahead to offset the impact of a fall in iron ore prices.