Introduction: Manganese is widely used as an alloy to reduce brittleness of steel and provide it strength. Other usages of this mineral include battery cathodes, ferrites used in electronic products, micronutrients used in animal feed and other uses in water treatment, textiles and fertilizers. Elemental manganese forms when it comes into contact with oxygen, carbon, and silicon, thereby forming manganese minerals. Manganese ores generally has 25-45% manganese mostly in the form of oxide (or hydroxide) and carbonate minerals.

Availability: Manganese ore is produced by a few countries like Australia, South Africa, Gabon and China. The manganese ores are found in the extensive layers of manganese-rich sedimentary rocks which were formed during the ancient oceans under specialized environmental conditions. Demand for manganese is closely correlated to steel production and this trend is likely to be replicated in the future.

Let’s have a look on two leading manganese suppliers in Australia.

South32 Limited (ASX: S32) operates in diversified mining, minerals and metals across the world. The company is engaged in production of manganese, bauxite, alumina, aluminum, energy and metallurgical coal, nickel, silver, lead and zinc and operates in Australia, Southern Africa and South America. The company is also the owner of a high-grade zinc, lead and silver deposits across North America and have several partnerships with companies with low exploring capabilities primarily focused on base metals.

The production facilities of the company are discussed as below:

WORSLEY ALUMINA: South32 holds a stake of 86% in Worsley Alumina, while rest is owned by Japan Alumina Associates and Sojitz Alumina Pty Ltd, respectively. Minerals like Bauxite is explored near the town of Boddington located at 130 kilometres south-east of Perth. It is transported by overland conveyor to the alumina refinery near Collie and turned into alumina powder, before being transported by rail to Bunbury Port.

BRAZIL ALUMINA: The company has further 14.8% interest in non-operated Mineração Rio do Norte (MRN) mine, 36% in Alumar alumina refinery and 40% in aluminum smelter, which is currently going through maintenance.

HILLSIDE ALUMINIUM: The Hillside Aluminium smelter is situated in the Richards Bay in South Africa and the company owns 100% of it. The smelter uses alumina which is primarily imported from Worsley Alumina. The minerals are required for producing high grade aluminum for both export and domestic markets.

S32 has a 47.1% stake in Mozal Aluminium and is located 20 kilometers west of Mozambique’s capital city, Maputo.

This mine is located in the southern coalfields of New South Wales and the company owns 100% stake. The company manages two underground metallurgical coal mines, Appin mine and Dendrobium mine. It also manages coal preparation plants located at West Cliff and Dendrobium.

Australia Manganese consists of Groote Eylandt Mining Company (GEMCO) in the Northern Territory and Tasmanian Electro Metallurgical Company (TEMCO) in Tasmania. S32 owns a 60% stake at GEMCO while the remaining 40 per cent is owned by Anglo-American Plc.

This mine is owned by South32 at 60% while the rest is owned by Anglo American Plc. Samancor 74% of HMM indirectly, which gives South32 its ownership interest of 44.4 per cent.

During the first half of FY19, the company expanded global footprint along with the acquisition of the high-grade zinc, lead and silver Hermosa project in Arizona. During the year, the company took a control of 50% in Eagle Downs Metallurgical Coal project. This project is located in Queensland’s Bowen Basin. The Management Maintained the third and final year of the Option Agreement with Trilogy Metals targeting a high-grade copper resource in Alaska. The company invested US$34 million in greenfield exploration projects with its partners. 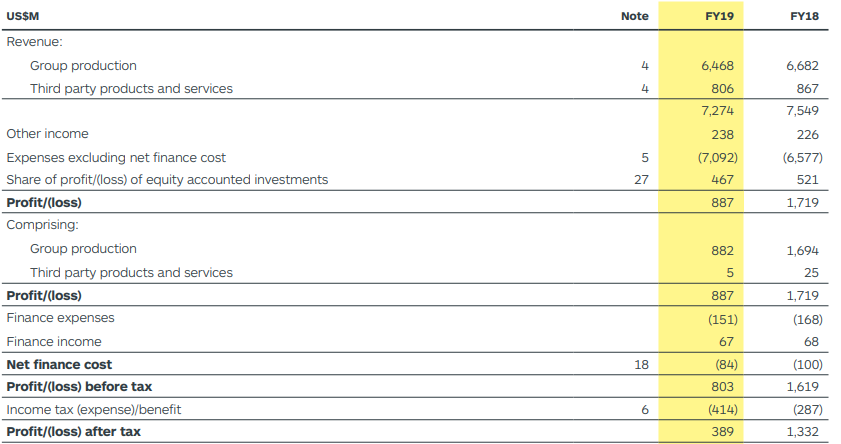 Stock update: The stock of S32 closed at $2.430 on 4 October 2019 along with a market capitalization of $12.21 billion. The stock has generated negative returns of 24.77% and 37.37% during the last three months and six months, respectively. The stock is available at a price to earnings multiples of 22.13x. The dividend yield of the stock stands at 4.65% on an annual basis. The number of shares outstanding of S32 stands at 4.96 billion.

OM Holdings Limited (ASX: OMH) is a mining and exploration company which operates in exploration and trading of minerals like manganese from Bootu Creek Mine in Australia.

During April 2019, OMH signed the Agreement with Bryah Resources Limited in which the former paid a $250,000 as Signing Fee with the primary objective of exploring new commercially mineable manganese. The motive was to fulfill near term production targets. OMH now holds a stake of 10% in the Joint Venture in the Bryah Basin Project. OMH has planned to invest $2.0 million in the particular JV to increase its 10% JV interest to 51% JV interest.

Revenue from operating activities for the first half of FY19 stood at $534.6 million, a decline of 35% over y-o-y basis due to lower tonnages of ores and alloys traded, and a softening of the manganese ore and ferroalloy prices in 1H 2019. The company reported 20% GPM in first half of 2019 compared to 22% in 1H 2018, primarily due to weaker alloy and ore prices, and lower volumes of ferroalloy and manganese ore traded. Total borrowings stood at $491.7 million as on 30 June 2019 (as against $511.8 million as on 31 December 2018). The Business also made the part redemption of the Hanwa convertible note of $5.8 million. Property, plant and equipment increased from $660.7 million as on 31 December 2018 to $680.4 million as on 30 June 2019 due to additional construction of OM Sarawak’s sintering plant, storage warehouses, laboratory, canteen and offices, and OMM’s Tailings Retreatment Plant as construction-in-progress as at 30 June 2019. Net cash generated from operating activities of came in at $50.3 million during the first half of 2019.

Profit after tax during the half-year ended 30 June 2019 came in at $50.0 million as compared to a profit after tax of $106.4 million on previous corresponding period. The result was predominantly attributed to lower ore and ferroalloy prices. The ferrosilicon price fell by 23%, with an approximate impact of $43.6 million. Consolidated cash position of the company stood at $56.0 million as at 30 June 2019 as compared to $91.8 million as at 31 December 2018. 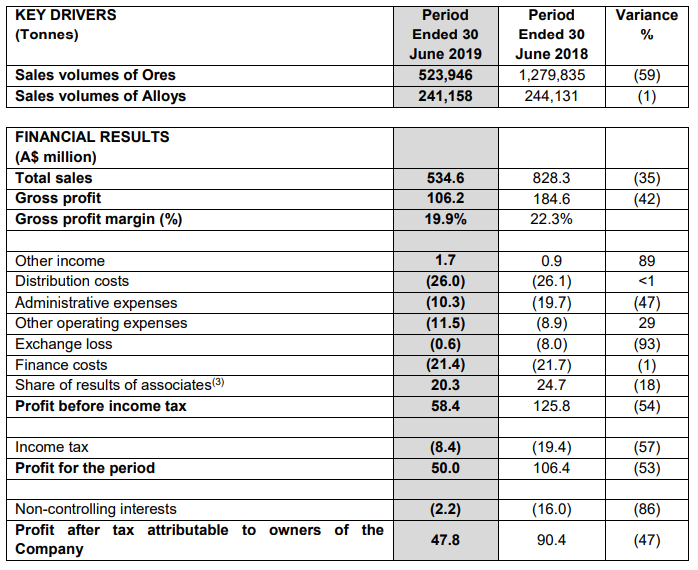 Stock Update: The stock of OMH closed at $0.430 on 4 October 2019 along with a market capitalization of $339.77 million. The stock has generated negative returns of 50.57% and 65.60% during the last three months and six months, respectively. The stock is available at a price to earnings multiples of 2.65x. The dividend yield of the stock stands at 6.98% on annual basis. The number of shares outstanding of OMH stands at 738.62 million.