During the last few years the requirement for infant formula, specifically the formula made in Australia, has increased exponentially. The dairy or infant formula related products manufactured in Australia and New Zealand have high quality and are clean.

The best way for a nutritious and healthy intake to an infant is breastfeeding, though, for the proper and entire development of babies who are not breastfed, a reliable and nutritious alternative of breast milk is suggested for the infants and toddlers.

The infant formula and products are regulated under Standard 2.9.1 which stands for Infant Formula Products, in the Australia New Zealand Food Standards Code. There are mainly three categories of infant formula/products under this standard-

The a2 Milk Company Limited (ASX:A2M)

An ASX listed Infant formula company, The a2 Milk Company Limited (ASX:A2M) was founded in 2000 in New Zealand by Dr Corran McLachlan. The company is engaged into commercialising A1 protein-free milk under its brands the a2 and a2 MILK with its operations in the US, China, Australia, New Zealand, and other markets.

The company also revealed that it’s Chief Technical Officer Phil Rybinski would leave his role to pursue some other interests and Shareef Khan, Chief Operations Officer would undertake responsibility for all technical function activities on a temporary basis. More arrangements for permanent leadership would be declared at a future date.

Australia and New Zealand based company Keytone Dairy Corporation Limited (ASX:KTD) is an established producer and exporter of formulated dairy products as well as products for health and wellness. The company has its operation in the dairy products division of the FMCG industry. Keytone’s products are produced under its brands KeyHealth® and KeyDairy®, and in ranges, including nutrition powders and premium milk.

In mid-December 2019, the company announced that integration of the company’s two Melbourne based powder manufacturing sites is completed before its scheduled time. This integration would lead to considerable annualised synergies and operational efficiencies.

Moreover, the company also mentioned that all necessary accreditations and licensing had been received, including Dairy Food Safety Victoria and Certification and Accreditation Administration of the People’s Republic of China (CNCA).

In December 2019, the company announced that it’s second (state-of-the-art) manufacturing facility in New Zealand has received all required licensing approvals from the New Zealand Ministry of Primary Industries and by extension, CNCA registration. The New Zealand based new facility is ready to start full-scale production.

An Australian based company Nuchev Limited (ASX:NUC) was established in 2013 and is engaged in the development, marketing and selling of a variety of goat formula products into the Australian and Asian markets. The company has its operations in a unique position within the dairy nutrition market and its highly skilled and experienced management team lead by its CEO Ben Dingle.

The primary products of the company are Oli6® branded goat infant formula (GIF) range that is formulated specifically for the requirements of children and infants.

Addition to this, the company has recently launched a Goat Milk Powder product under the Oli6® brand, which is aimed for adult end customers, and the company anticipates developing other goat nutritional products in the future.

In early-December 2019, the company updated its financial report for FY2019 (ended 30 June 2019). The key financial highlights are-

Evolved from being an R&D, production and marketing company, Australia headquartered, Clover Corporation Limited (ASX: CLV) is focussed on establishing strategic relationships centred on the new product, technology development and commercialisation. The microencapsulation technology of the company is superior and enables nutritional oils, such as fish, fungal, algal, tuna oils, to be added to foods and beverages, infant formula.

In November 2019, the company updated the market with its Annual General Meeting presentation on ASX, mentioning the full year performance highlights, including the outlook for the first half of the fiscal year 2020. The quick highlights are- 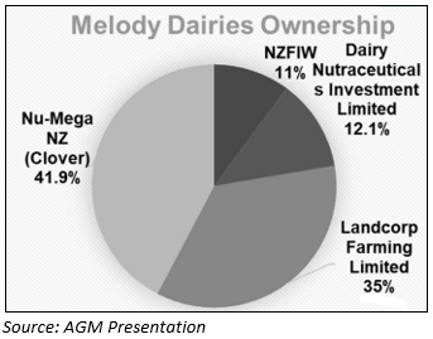 The company updated its Annual General Meeting presentation highlighting the financial information for the first quarter of FY20. The quick summary for Q1FY20- 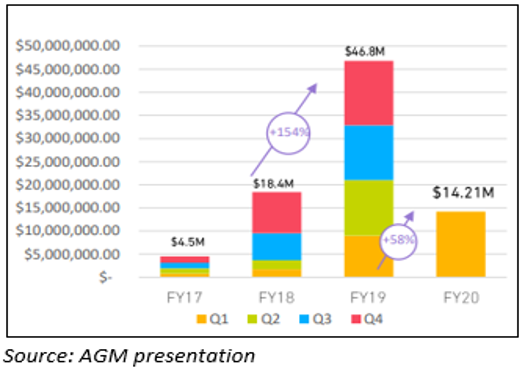 Outlook- For the remainder of the financial year 2020, the company will focus on three key drivers for its long-term growth-