The Cour de Cassation is France's highest court and reviews the decision-making process of lower courts on points of law or procedure.

Decisions at first instance by the Paris Commercial Court in July 2014 and on appeal to the Paris Court of Appeal in October 2017 had earlier dismissed SRP's claims and upheld DPF's counterclaims of unlawful disparagement.

In its decision, the Cour de Cassation gave the following verdict:

Thus, the Cour de Cassation did not find DPF liable for any unlawful conduct and discovered no concrete evidence as far as the merit of SRP's allegations are concerned. SRP now has around 2 months to lodge an appeal to the original 2014 decision of the Paris Commercial Court from the date that the Cour de Cassation’s decision is formally served on DPF.

Domino’s Pizza Enterprises continues to deny all claims and intends to defend any new proceedings if they arise. Based on DPF’s experience of this litigation, any new appeal could take 18 – 24 months from the time it is brought before any decision is made. Presently, Domino’s Pizza Enterprises is reviewing the judgment and its potential implications. The company will keep the shareholders updated if any material developments arise.

Background Of The Proceedings

In addition to the above case, there are a number of other French legal proceedings by SRP against DPF (main claim) and seven SRP franchisees against DPF and the relevant DPF franchisees (local claims). The core essence of the French proceedings relate to allegations that DPF and its franchisees breached French laws governing payment time limitations and lending, thereby deriving an unfair competitive advantage.

SRP claims significant damages such as impediments to the expansion of its franchise network, lost royalty income from SRP franchisees and harm to SRP’s image. On the other hand, DPF and its franchisees have consistently denied liability and vigorously defended the claims.

SRP further retaliated and filed appeals to the above decisions in the Court of Appeal, which were again dismissed over the course of 2017 and 2018. The seventh local claim is yet to be heard by the Paris Commercial Court.

On 6 January 2020, Domino’s Pizza Enterprises announced that it was expecting to hear shortly from the Federal Court regarding proceedings by an Australian franchisee.

The company was well aware that its efforts to improve the standards of its franchisee network, a program that started two years ago, could potentially receive some disapproval by some franchisees that may also choose to leave the network or may raise the threat of litigation through the media.

Domino’s Pizza Enterprises also stated that such claims do not represent the company’s overall relationship with its wider franchisee network.

In anticipation of the press coverage, DMP disclosed that the dispute has been ongoing for some time with this particular franchisee, which has been successfully operating for over 20 years and recently sold one of its stores on commercial terms to another franchisee.

DMP expressed its disappointment in the franchisee that chose this path of litigation, but the company considers the franchisee’s claims to be without merit and denied the same. Besides, the claims, as per DMP will not be financially material in any case.

At its Annual General Meeting held on 28 October 2019, Domino’s Pizza Enterprises released its trading update, reporting a 10.6% increase in its Network Sales relative to prior year and opening of 42 new stores to that date. The first store was opened in the new market of Denmark and the first store in Luxembourg was to be opened in the coming weeks. 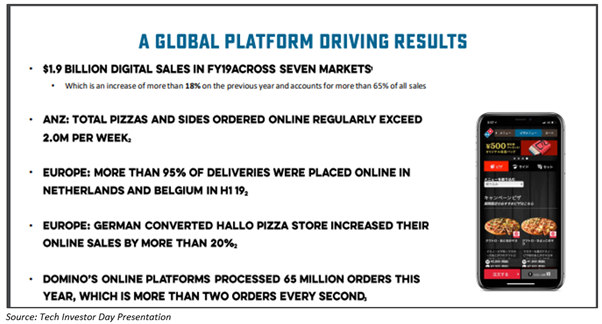 As per Group CEO and Managing Director Don Meij, Domino’s is delivering on its strategy to fortress its domestic and international markets, opening a record number of stores year-to-date to deliver to more customers in eight countries.

Going forth, Domino’s aims to open 1,000 Domino’s stores each in France and Germany and grow group same store sales at a rate of 3%-6%, breaking the prevailing wisdom that says you can’t have high quality meals, available fast, at an affordable price.