A Look At 2 Stocks In The Fast Food Industry – CKF, DMP

Changes in consumer preferences are shaping the fast food industry in Australia.

The demand for the fast food industry in Australia has been significantly impacted over the past few years with a rise in consumer health awareness. The consumer is now much more concerned about the nutritional content of the food and tends to choose healthier options. As a result, the companies in the industry have made significant efforts to fit in with the rising demand for more nutrition than taste by incorporating consumer concerns and bringing in healthier, premium choices with less fat, sugar and salt content.

Therefore, it can be said that the threats and opportunities in the fast food industry are predominantly characterised by the following:

Some of the fast food franchises operating in Australia are Subway, KFC, McDonald’s, Hungry Jaclok’s, Domino’s and Pizza Hut.

Let us look at 2 stocks in the fast food industry-

The company released a new announcement to the exchange regarding the planned succession of Graham Maxwell, the company’s Managing Director & CEO. His retirement is due on 1st July 2020 and the company intends to appoint Drew O’Malley as the new Chief Executive Officer. Drew is currently serving as the company’s Chief Operating Officer in Australia and is responsible for the day-to-day operations of the company’s expanding network of restaurants in Australia. He has extensive experience in the restaurant industry with a proven track record of growing businesses. Prior to Collins Foods, he worked with AmRest and held various positions, including COO for Central Europe, Managing Director of Starbucks CEE and Brand President of KFC in Poland and the Czech Republic. 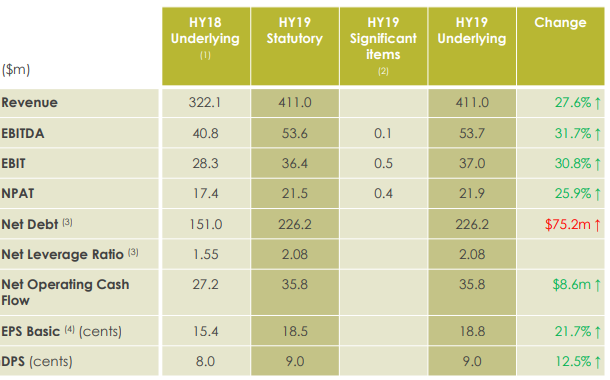 KFC Australia: For the six month period, KFC Australia witnessed strong growth with a national footprint of 228 KFC restaurants. The segment reported strong financial results with EBITDA rising by 23.5% to $56.1 million in the current period as compared to the prior corresponding period. EBITDA margins also increased to 17% as compared to an HY18 EBITDA margin of 16.8%. H1 FY19 period marked a focus on operational efficiencies and margin management across the network, which helped the company to achieve a remarkable performance in the segment. The company completed the acquisition of three restaurants from Yum! and has a target to establish 40 to 45 new KFC restaurants in Australia over the next five years.

KFC Europe: This segment covers its operations through 17 restaurants in Germany and 18 in the Netherlands. The revenue from the segment grew by 121.5% to $56.9 million as compared to the pcp. The company is still in its infancy and provides an opportunity to drive long term growth for the business in Europe. The company is planning to build four new restaurants in Germany and the Netherlands in the second half of FY19.

Sizzler: Sizzler continued to generate earnings with Sizzler Asia royalty revenues up by 19% due to new restaurant openings as well as an increase in the same-store sales. Overall, Sizzler revenue reported a decline of 7.6% at $22.2 million in H1 FY19.

Taco Bell: The company continued the expansion by opening its second Taco Bell restaurant in Robina, Queensland and is planning to open two more restaurants before the end of CY2019. The company entered into a development agreement with Taco Bell, a subsidiary of Yum! Brands Inc. to build 50 restaurants over the next three calendar years.

On the outlook front, the company is focused on growth strategy through the opening of new restaurants in Australia and Europe by the end of the financial year. The company also aims to increase the size of its home delivery footprint in the next six months.

Domino’s Pizza Enterprises Limited (ASX: DMP) is engaged in the operation of retail food outlets and the operation of franchise services. The company recently updated the investors on the speculation in the UK media that Andrew Rennie, CEO Europe, will be replacing the outgoing Managing Director of Domino’s Pizza Group, plc. The company mentioned that the speculations were insubstantial, and Andrew will continue his current role as CEO of Europe.

In the month of April, the company entered into an asset sale agreement. The agreement entails the acquisition of corporate store assets, rights and entitlements in relation to the franchise operations in Denmark, formerly owned by Domino’s Pizza Scandinavia A/S. The company made the acquisition for a consideration of EUR 2.5 million. The company also revised the guidance for the future store count in Europe. It changed the previous guidance of 2,700 stores to 2,850 stores as a result of the acquisition. The acquisition will serve as an additional growth platform for the European operations of the company, as Denmark has a large population and a good market potential to accelerate the growth.

During H1 FY19, the company depicted a strong underlying operating cash flow up 26.2% with remarkable cash conversion rate. The market for pizza and fast food categories grew tremendously in New Zealand. The overseas market in Europe and Japan accounted for a majority of the share in both revenue and EBITDA. The market contributed to more than 70% of the revenue and more than half of the EBITDA, with a value of $71 million. With a much larger population in the current overseas markets than that of Australia, the company’s global business provides a pathway for future growth.

The company reported a remarkable online performance with a total of 32.4 million orders processed in the half year. Online sales for the period increased +16.5% on the prior corresponding period. The global network sales during the period witnessed an increase of +3.3% on a same-store sales basis. Benelux, Germany, Japan and New Zealand depicted strong results with softer performance in Australia. The performance in France was lower than the expected level.

FY19 Guidance: The company provided an EBIT guidance to be at the bottom end of the range of $227 million to $247 million. The same-store sales for the entire year are expected to be at the mid to lower end of 3% to 6%. The company’s anticipated store openings in the range of +200 to +215 organic new stores will lead to a growth outlook of +7% to 9%. Net CapEx is expected to be within the ambit of $60 million to $70 million.