Retirement planning is the process of deciding retirement income goals and the decisions needed to accomplish them. This includes finding sources of income, executing a savings program, estimating expenses and managing risk and assets.

An easy rule of thumb says that one needs to replenish approximately 70% to 90% of pre-retirement income to run a decent retired life. This implies that if one is making $10,000 a month (before taxes), one might require $7,000 to $9,000 a month as retirement income to have the same standard of living than one had before retirement. For example, if someone plans to retire in next 20 years, then retirement planning would have to involve creating a system that generates $7,000-$9,000 per month income.

Why Is Retirement Planning Necessary?

Dividend stocks are considered as a great option for retirement planning. These stocks can help one hedge against rising inflation and give stable income in the long term.

Four good dividends stocks which one can consider for a robust portfolio are discussed below:

Amcor PLC is a global leader in producing and developing responsible packaging for food and beverage, medical, pharmaceutical, home and personal care products.

The company reported solid performance for the year with good growth in various areas. Net sales saw an increase of 5.5% and adjusted net income increased by 9% - both in constant currency terms and YoY due to marked improvements in working capital.

The company’s adjusted cash flow after dividends stood at US$193 million. The company reported GAAP net income of $430.2 million and cash flow from operating activities stood at $776.1 million;

FY19 was an important year for Telstra as it commenced T22 strategy to transform the company for the future. According to Chairman Mr John Mullen, with substantial progress, Telstra is a very different, much simpler and a more customer focused organisation than just a year ago:

The shareholders of the company will receive a total dividend of 16 cents per share, combined with the total interim dividend paid in February 2019, returning $1.9 billion to shareholders.

The company indicated a 25% reduction in the total number of premises forecast to be connected during FY20 from 2 million to 1.5 million, as indicated by the NBN Co’s 2020 Corporate Plan.

Transurban Group is into the business of building and operation of toll roads in Sydney, Melbourne and Brisbane, Australia, as well as in the Greater Washington Area and Montreal in North America.

The company has announced that the Transurban Group’s financing vehicle, Transurban Finance Company Pty Limited, has successfully refinanced its existing $1,650 million corporate syndicated bank debt facility. It comprises of two tranches of $825 million with time period of 3 and 5 years, respectively.

The company expects to commence tolling on the 395 Express Lanes on 17 November 2019. The 13-kilometre extension of the 95 Express Lanes to the Washington DC border will open on both schedule and budget.

The project consists of upgrades to transportation and traveller access at the Pentagon that opened to customers in June 2019. The 395 Express Lanes enlarges Transurban’s long-lasting collaboration with the Virginia government to provide and operate the 85-kilometre network of tolled lanes.

CEO Scott Charlton believes that the completion of the 395 Express Lanes project was a substantial development in Transurban’s network of operated lanes in the Greater Washington Area.

Rural Funds Group Limited is engaged in the business of leasing agricultural equipment and properties.

RFM has entered into agreements for the sale of RFF’s 17 poultry farms to ProTen Investment Management Pty Ltd for $72 million. 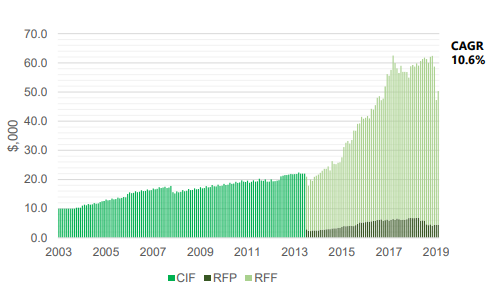