A View On Beverages And Fast Food Industry

The food and beverages industry include the companies which are involved in the end-to-end business of processing, packaging and distribution of fresh food, prepared foods and packaged foods along with alcoholic and non-alcoholic beverages. 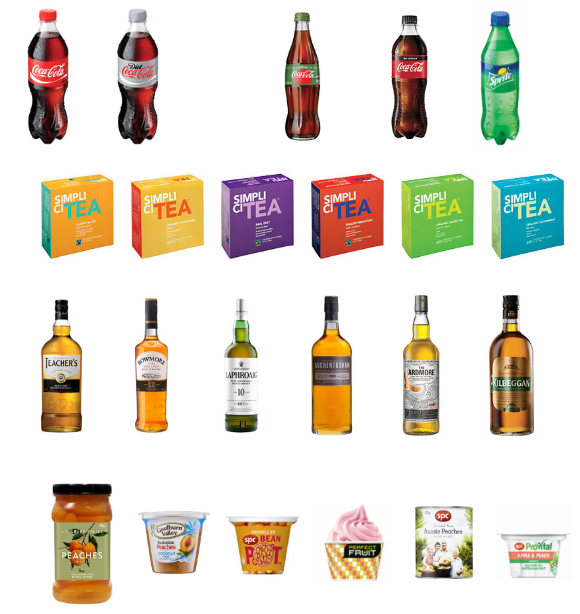 The company announced on 4th June that it had finalised the sale of the SPC fruit and vegetable processing business to Shepparton Partners Collective Pty Ltd and Shepparton Partners Collective. The consideration amount is $40 million, to be paid upon completion of the deal. Targeted to be completed before the end of June 2019, the profit on sale of $10-15 million is being anticipated (after considering predicted working capital balances and working capital changes to the sale price and costs of disposal).

Besides this, subject to business performance, the agreement is inclusive of a four-year deferred payment that could result in (up to) an extra $15 million worth sale proceeds at that time. Given the realisation of recognised deferred tax assets, the company’s capability to frank dividends would have a notable effect in the short to medium term.

Looking back in time, the company had acquired the SPC business in 2005. Ever since, CCL has made investments of almost $250 million in areas like technology, equipment, operational and energy efficiencies. In 2014 to 2018, there was a co-investment program worth $100 million, which modernised the business’ snack cup and tomato manufacturing, apart from having a pouch line and a new sterile fruit processing system at the Shepparton site on board. The divestment process for the business began in November 2018.

The Shepparton Partners Collective Pty Ltd and its group aim to grow the Goulburn Valley-based business and provide employment to the permanent staff.

Group Managing Director, Alison Watkins stated that the deal was for the business to continue its transformation and receive opportunities in domestic and global markets. He mentioned that the company’s award-winning functional food range - ProVital™ has been garnering support with dieticians. The processing and automation capability had opened new export markets.

Looking at the Shepparton Partners Collective, it is a JV between The Eights and Perma Funds Management. It holds Australian and global experience in finance, food, retail, supply chain, agri-business and technology.

The company conducted its AGM on 15th May 2019. The trading revenue was $4.75 billion (increase of 1.1%) whereas the underlying earnings before interest and tax amounted to $634.5 million. The company is aiming to target medium term dividend payout ratio of over 80% for 2019.

There is a rise in the number of chained consumer foodservice restaurants across the globe. Furthermore, as per a market research, Australians, specifically, eat out averagely two to three times a week, which is more than 50 million meals per week. In the country, the market is highly fragmented, with the presence of many local and independent restaurants.

Some of the major players of the Australian market in the F&B sector are McDonald’s Corp., Yum! Brands, Domino’s Pizza, StarBucks Corp. and Nando’s. With a rising demand for healthy food consumption, these brands are focussed on strategically developing new products with functional benefits.

McDonald's had been the most preferred restaurant by the consumers, followed by KFC, fish and chip shops, and chains offering Asian food. In the past decade, Domino’s has been expanding in Australia, and as of 2018, it had 693 outlets located across the country. 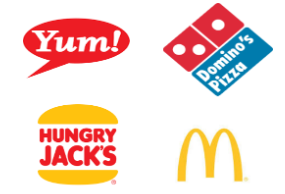 The most popular cuisines in the Australian consumers are Indian, Korean, Japanese, Thai, Italian, Chinese, Vietnamese and Mexican. There is an abundance of opportunities in the Australian foodservice market, with the increase in the population eating away from home and a rise in interest in speciality niche products in the market.

Operational from Brisbane, Collins Foods Limited (ASX: CKF) operates food service retail outlets. It is the KFC franchisee in Europe and Australia, Taco Bell franchisee in Australia and Asia’s franchisor for Sizzler. Besides this, it is also the owner of Sizzler restaurants in Australia.

As per company’s recently released HY19 results, its revenue was up by 27.6% to $411.0 million on pcp. The KFC revenue growth in Australia alone was 21.9% to $330 million. In Australia, final 3 KFC restaurants were acquired from Yum! and two new restaurants were built and opened. The sales in the Netherlands and Germany had an adverse impact of an unusually hot summer, though two new restaurants were built and opened in Germany. Taco Bell is progressing well with preparation for ramped up development in 2019, as per the company. The Sizzler Asia witnessed growing sales and earnings and had 73 restaurants in Asia at the half year. 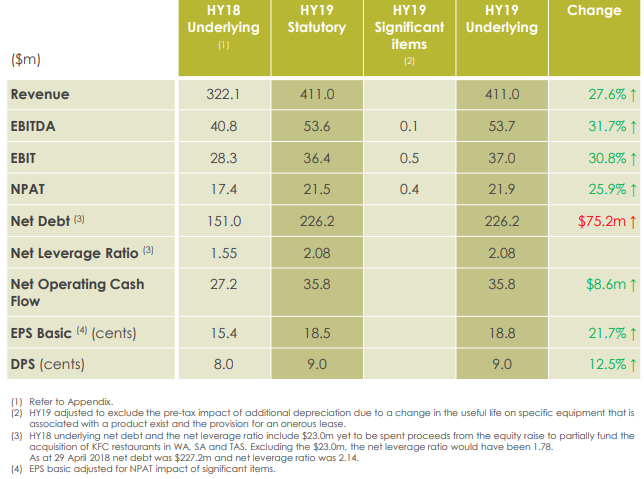 The company had a strong operating cash flow (up 31.6% to $35.8 million) which supported its growth. 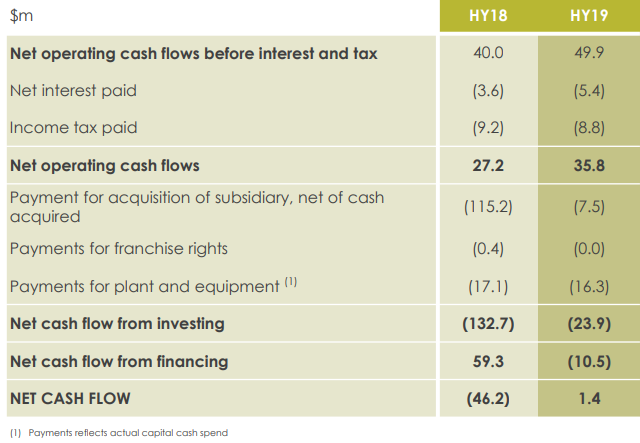 As per its half year results for the period ending 30th December, the company recorded Network Sales of $1,430.9 million, up by 14.6% (Half-on-Half growth). The online sales were up by 16.5% (Half-on-Half growth) to $934.3 million. The company continued to grow its sales and market share. The performance was sturdy in New Zealand, Belgium, Germany, Japan and Netherlands. There was however a slower than expected performance in France and a soft season in Australia too. 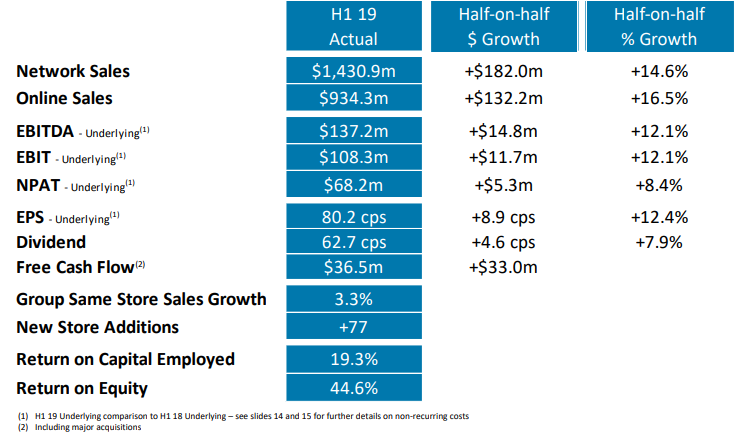 As its guidance, the company is focussing on increasing its Franchisee profitability. The company is also aiming to launch a next gen mobile app. In H219, a new cheese is most likely to be introduced.

On 10th April 2019, the company announced that it had entered into a binding agreement for the acquisition of the Master Franchise rights for Domino’s Pizza in Denmark and assets previously owned by DPS.