The world energy consumption is estimated by the United States Energy Information Administration (or EIA) to grow by nearly 50 per cent between 2018 to 2050 under the reference case model.

The higher energy demand is estimated by the EIA to come from the countries that are not part of the Organization for Economic Cooperation and Development (or non-OECD) amid higher economic growth anticipation.

What is a Reference Case?

The Reference case acts as the baseline to compare other cases which include different assumptions about the determinants of the energy system such as economic drives, governmental policy changes, etc., to anticipate the potential impact of those assumptions.

The anticipated changes that are modelled under the reference case are as below:

However, the reference case does not consider a change in national boundaries, international agreements, disruptive economic events, technological breakthroughs.

In non-OECD regions, countries such as India, China, other Asia is estimated to grow at an average of near or over 4 per cent.

The higher GDP growth would lead to higher energy consumption in the non-OECD countries.

The strong economic growth along with increased accessibility to marketed energy coupled with rapid population growth in the non-OECD is anticipated to lead the higher consumption. 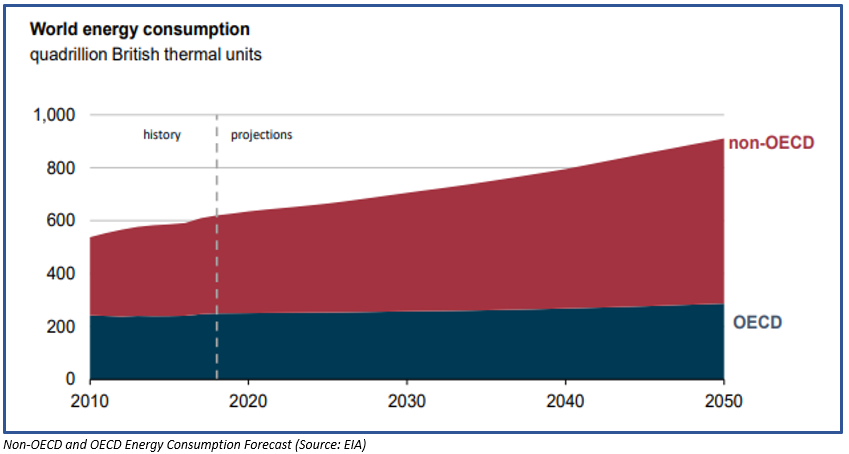 In OECD countries, slower population and economic growth, improvements in energy efficiency, and less growth in energy-intensive industries is anticipated by the EIA to lead towards slower growth in energy consumption. 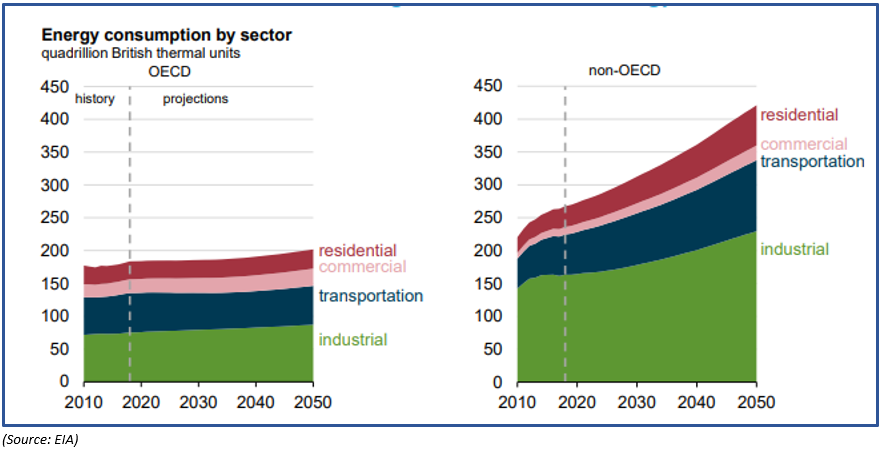 The end-use fuels are those used in the industrial, transportation, and buildings sector and exclude fuels used for electric power generation.

The electricity use in the residential and commercial building sector is anticipated by EIA to increase amid growing income and population. 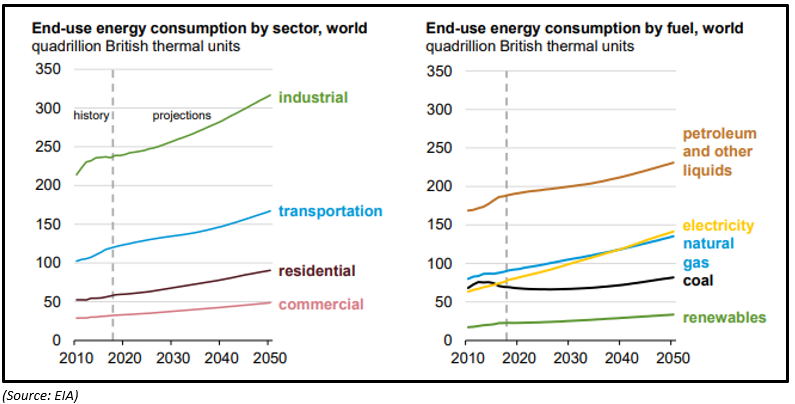 The electricity consumption is estimated to mark a substantial increase in the industrial and residential sector. The electricity use in the building sector is expected to witness an increase amid a rise in personal income and the continuation of urban migration in non-OECD countries.

In the building sector, particularly the residential building electricity consumption is anticipated to increase by over 100 per cent from 2018 to 2050.

The electricity consumption of the transportation sector is anticipated by the EIA to increase threefold between 2018 to 2050 amid an estimated increase in plug-in or electric vehicle penetration into the global market.

However, transportation would still account for less than 6 per cent of total delivered electricity consumption in 2050.

Which Fuel would Witness a Demand Boom?

Fossil fuels contribute the most in the energy generation sector, and under the Reference case of EIA, natural gas and renewable energy sources would account for most of the growth in energy generation.

Under the Reference case, the renewables (including hydropower) are the fastest-growing source of electricity generation during the forecasted period of 2018 to 2050, and EIA anticipates an average increase of 3.6 per cent for the renewable energy resources for energy generation. 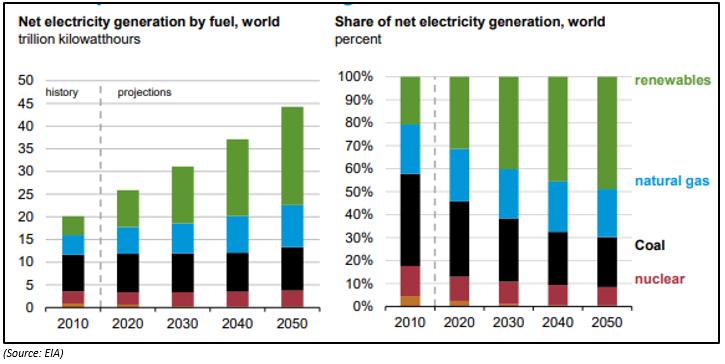 By 2050, the United States, China, India and OECD Europe are anticipated to have around 75 per cent of the world’s renewables generation amid demand for alternative and new energy resources.

Natural gas generation is estimated to grow by an average of 1.5 per cent per year from 2018 to 2050, and nuclear energy generation is anticipated to increase by 1.0 per cent a year.

Also Read: How Would the Coal Demand Dilemma Shape the Australian Coal Industry Ahead?

To wrap up- the world energy consumption is anticipated to increase in both OECD and non-OECD nations; however, non-OECD countries are estimated to witness relatively higher consumption against OECD nations amid rapid economic growth, income and population.