Recently, Barbados, a Caribbean country, has introduced the Medicinal Cannabis Industry Act. If passed, it intends to open doors for the medicinal cannabis in the small country. Besides, the bill has proposed to set up a Licensing Authority, and Licensing Board.

Meanwhile, Barbados Drug Service has invited applications from the companies to supply approved medicinal cannabis to the nation by April 2020. The health ministry of the country has allowed five drugs derived from cannabis to be supplied to the country.

In Brazil, the health regulators have been engaged with a landmark strategy to permit the domestic cultivation of the drug, and registration of medicinal cannabis products that have not completed clinical trials.

In June this year, Brazilian National Sanitary Surveillance Agency had given a nod for two draft resolutions, which asked to regulate the domestic cultivation of the drug, only for medicinal & scientific purposes. Besides, it was noted to review the existing procedures for cannabis derived medicines and allow commercialisation for drugs post the second phase of clinical trials. Further, the public consultation period was kicked off, and it has ended on 19 August 2019. So, the results would be made available soon.

Meanwhile, the opposition to the matter has been voiced by one of the ministers, and the Brazilian Federal Council of Medicine, Brazilian Psychiatric Association (ABP) had opposed the proposal by ANVISA.

In Mexico, the parliament had created a website to log the public opinion on the legalisation of cannabis. Meanwhile, in the past, the Supreme Court of the country had asked to legalise with necessary regulation by October 2019. Besides, the bill was introduced in parliament last year.

The US Presidential Candidate for 2020, Bernie Sanders, has recently shared his opinion on social media:

âWe must legalise marijuana nationally, expunge past marijuana convictions and ensure revenue from legal marijuana is reinvested in the communities mostly impacted by the failed War on Drugsâ

Mr Sanders is one of the early supporters of the legalisation of cannabis. He has been supporting the cause since 2015. In his words, he intends to channelise the profits of the cannabis companies for an extended social cause to the communities impacted by the war on drugs, which only claimed lives.

Reportedly, as announced by MXC this month on 13 August 2019, the company had achieved 100 patient milestones in Australia, who were prescribed or being processed for prescription of the company products. The company is leveraging its international distribution agreements and production from European facility to become a world leading bio-pharma company. 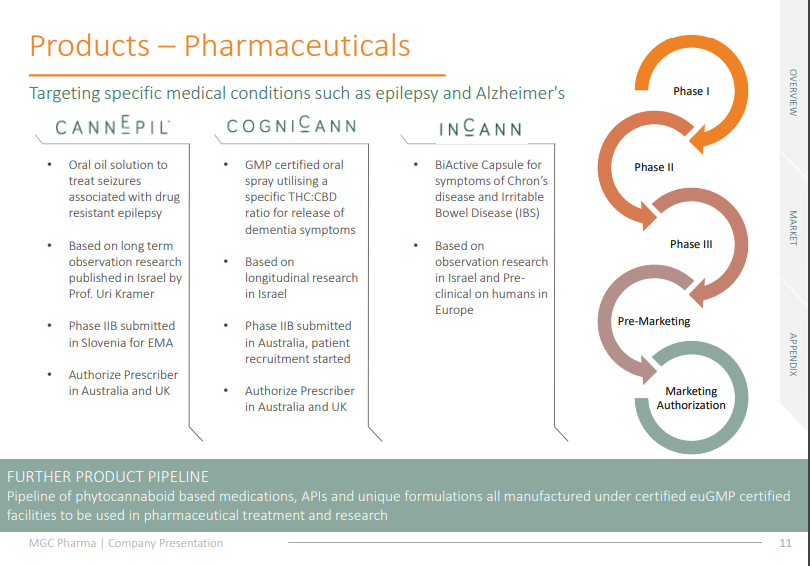 Besides, the new shipment arrived in August, and the company has been engaged with the distributors in Australia to tap clinics with eligible patients under the Special Access Scheme. Meanwhile, the companyâs wholesale & distributor â Health House International had facilitated a deal with Tetra Health.

Under the agreement, Tetra would purchase the companyâs products from Health House International to distribute in its network of pharmacies, partnered clinics & prescribing physicians.

On 8 August 2019, the company reported that it signed a long-term lease agreement on the 6km2 site in Malta, after formal approval from Malta Enterprise. Reportedly, in Malta, the companyâs facility is to be one of the first commercial production facilities for EU- Good Manufacturing Practice (GMP) grade along with research facilities. Therefore, the agreement was a testament to the breakthrough in Maltese medicinal cannabis industry.

Meanwhile, the facility would be EU-GMP compliant production facility with the capability of producing over 8k units of each MGCâs pharmaceutical grade product per hour. It is designed to meet the excess capacity to fulfil the global needs of the companyâs sales, once in full production.

Besides, the facility, complaint to EU energy efficiency regulations, designed as an eco-friendly energy efficient infrastructure for a minimum carbon footprint, and to enhance material cost-savings, margins of the company.

The stock of the company is suspended for trading since 27 July 2018. It last traded at A$0.037 on 27 July 2018. Further, on 16 August 2019, the company updated on the reinstatement to quotation of the CGBâs fully paid Ordinary Shares. It further mentioned that the ASX has got confirmation that the final documents would be arriving through courier service from overseas. Once the documents are received by the ASX, to fulfil the rest of the relisting terms and conditions, a formal notice on relisting with date and time would be issued on the ASX announcements platform. Hence, the company is now expecting that its shares would be reinstated to trade on ASX by middle to the latter part of next week.

On 15 May 2019, the company received approval for the relisting on ASX. Accordingly, the company has been working towards its relisting on the exchange. It was asserted that the company would restructure its board to comprise mostly of independent directors, a condition required by ASX to relist the company.

Reportedly, the subsidiary companies would be managed by dedicated management teams, responsible to the Board of the company. The subsidiaries of the company are engaged in the fully vertically integrated hemp business.

On 11 June 2019, the company released the replacement prospectus of the company dated 7 June 2019. Accordingly, the prospectus was prepared to offer up to 170,000,000 new shares at an issue price of $0.035 per share to raise up to $5,950,000. Besides, the offer had a minimum subscription of $1,995,000 along with one free attaching option for every two shares subscribed. Besides, on 2 July 2019, the company conducted its General Meeting and each resolution was passed.

On 9 August 2019, the company provided another update and reported that the public offer for 170,000,000 shares to raise $5,950,000 closed fully subscribed. Besides, it was asserted that all conditions were satisfied, the offers were closed, and the issue of securities has been completed.

In its latest Appendix 4C, released on 30 July 2019, the company has reported a growth of 413% in revenues over the past year. Accordingly, the company had delivered the first Australian and commercially grown resin to the state government.

Reportedly, the company had progressed on the expansion of its manufacturing facilities, and it acquired the Mildura site. The company has also initiated groundworks along with remodelling of the existing manufacturing area. 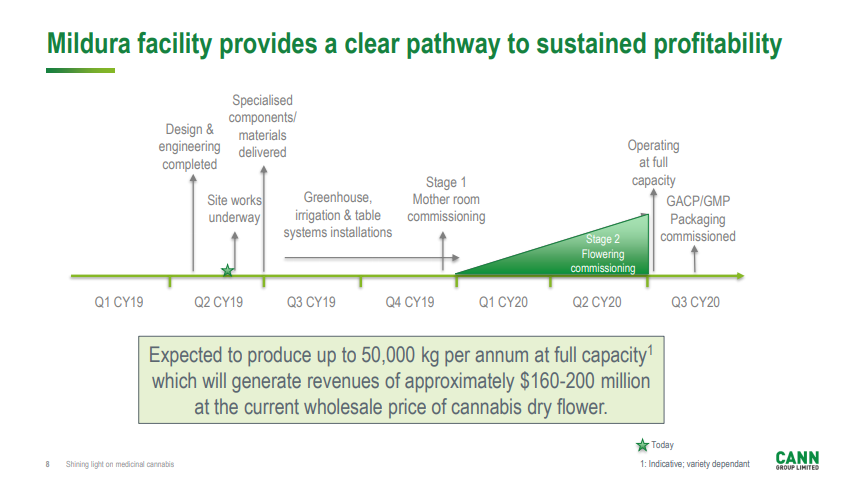 Meanwhile, the group has been working to export the products to Canada under the offtake agreement with one of the cannabis company from Canada. Products were being processed at its manufacturing partner to be consistent with GMP testing prior to the export.

Outlook: As per the release, the company expects the current period to be an important one, and its management would be focused on the development & construction of the manufacturing facility at Mildura. Besides, the company is expecting to finance the site through debt financing, and the talks were ongoing on it.

Meanwhile, the company would continue to refine its commercial strategy, keep looking for the opportunities to take part in clinical trials, which would propel the developments in the medicinal cannabis sector.