Australia has established its strong position in the contemporary world that is welcoming the good side of cannabis with open arms, amid the recreational legalising debates. The country joined the bandwagon of Alaska, Canada, North Korea and Uruguay to legalise the medicinal cannabis in February 2016. Since then, Australia has sprung up with quite a few booming businesses involved in the productivity, research and development of medicinal cannabis.

The World Health Organisation explains Cannabis as a general term which denotes the various psychoactive preparations of the Cannabis sativa plant. The prime psychoactive component in cannabis is THC or tetrahydrocannabinol. Cannabis is regarded as the most widely cultured, abused and trafficked illicit drug. Medicinal effects of cannabis have been acknowledged since time immemorial, as the drug is a bane in curing mental illnesses, cancer, PTSD, epilepsy, AIDS, nausea and vomiting, to name a few. However, cannabis remains to be a matter of debate when it comes to recreational uses, as it tends to have chronic health effects, if not utilised with caution.

What’s hot with Cannabis across the globe?

After the legalisation of cannabis in a few countries, some of the nations like Singapore, Malaysia and Thailand have followed suit to undertake the same path as Australia. Besides, cannabis make it to the everyday buzz across the globe. Let us take a sneak-peak on few of the latest updates in the world cannabis space:

With developments taking place around the world, Australia did not fall behind to create a buzz in the cannabis space. A 2018 start-up and licensed medicinal importer and distributor, Greenfield MC would step up its game to grow cannabis, under a new deal with a US-Canadian firm. The company has formed a joint venture to commence low-cost cultivation operations for commercial supply and export across the Asia-Pacific market, which is believed to be on the way into becoming the world’s largest market (the Asian market is expected to be ~$8.5 billion by 2024), driven by the increase in demand for cannabis-based treatment.

Market experts believe that Australia’s expertise in best agricultural practices, sturdy quality control and crop safety management systems would be a blessing to the cannabis space, being the gateway to Asia in this regard.

Amid these updates, let us shift our attention towards the share market. The Australian Securities Exchange has a hoard of cannabis-engaged companies, listed and trading on it.

Let us now look at 10 of these ‘Pot Stocks’, as they are referred to:

EXL launched Infusion Strategies, partnering up with RFI, increasing its CBD-infused exposure. It also acquired 25% of Pet Releaf and secured a CBD Processor Authorisation by the NY State Department of Agriculture Markets. In its US expansion end, EXL raised $50 million.

Also, the cash flow statement for the period is highlighted below:

A Nutritional pharmaceutical research and development company, MDC pleasingly announced a Heads of Agreement deal on 5 August 2019. The company signed the agreement with American Nutritional Corp Inc, an audited and approved manufacturer, to enter the US market using its existing nutraceuticals, which are well positioned for ANC clients. The deal is expected to aid the company’s product enter both medical and consumer markets, with the first US launch of the products in or around December 2019. Both the companies are currently preparing the definitive agreement and preparing for the market launch.

A cannabis cultivator, CAN released its quarterly activities report for the quarter ended 30 June 2019 on 30 July 2019, posting a revenue of $2.3 million, whopping up by 413% on the prior year. It received an Import permit from Health Canada and its Manufacturing partner IDT received a medicinal cannabis manufacturing licence in the quarter. Pure Cann New Zealand Limited investment was completed, and CAN was granted the manufacturing licences from the Office of Drug Control for the Southern & Northern facilities. Groundworks commenced at the recent possessed Mildura site and in the quarter, the company completed its first harvest of internationally sourced genetics.

The cash flow statement for the period is highlighted below:

An Australian licensed manufacturer, supplier and exporter of pharmaceutical grade medicinal cannabis, AGH entered into an agreement with Tetra Health Pty Ltd to support continued growth through its secondary clinic channels, as announced on 7 August 2019. Also, July proved to be a record-breaking month for patient uptake with 334 new patients, continuing the stance in August with 19 patients per business day on an average. 245 Australian Healthcare Professionals had prescribed Althea’s products, driven by the proprietary technology platform, Althea Concierge. 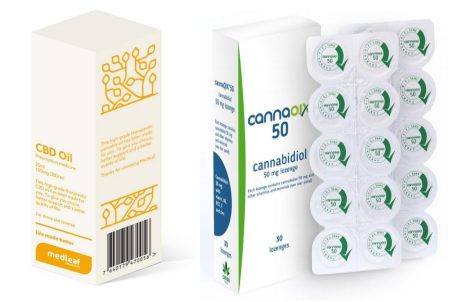 A developer, distributor and marketer of health and skincare products, BOD raised $1.2 million through the exercise of 4.5m options held by the Board and management team, resulting in a net increase of 2.6 million shares, as reported on 6 August 2019. BOD had over $11 million at bank post this raise.

Holder of a Cannabis Research Licence, a Medicinal Cannabis Licence (Cultivation), and two Manufacture Licences, THC provided an update for the quarter ended 30 June 2019, stating that its Southport Facility could initially produce 12,000kg of GMP API isolates and extracts. Product validation for TGA and ODC is expected to be complete in Q419, with production commencing in 2020. The hydroponics equipment division achieved an initial unaudited profit of more than A$100,000 for half-year period until 30 June 2019 and unaudited trading revenue for the half-year beyond A$2,000,000.

The cash flow statement for the period is highlighted below:

Developer, producer and marketer of cannabinoids-based pharmaceutical entity, AC8 released its activities for the three months ended 30 June 2019 on 31 July 2019. Mr Ido Kanyon joined as the new CEO of the company in May this year. Also, AC8 completed its first commercial shipment of medical cannabis concentrate from MediPharm Labs and entered a New supply agreement with TasAlk, securing a minimum of 30% of its resin supply requirements from TasAlk for an initial three-year period. During the period, the Company completed a production of its hard-shell cannabinoid medicines in a GMP environment.

The cash flow statement for the quarter is highlighted below:

A developer of cannabinoid-based formulations to treat medical conditions, ZLD provide an operational and cash update on 31 July 2019, stating that the insomnia trial was evaluating the safety and efficacy of a cannabinoid extract and is on-track to report final results by Q419.

In collaboration with St Vincent’s Hospital, ZLD is studying opioid reduction. The Phase I trial would deliver final results by Q419. As of the end of June 2019, a total of 72 patients had been enrolled towards the Autism Observational Trial, preliminary results of which would arrive by Q319. In May this year, ZLD obtained a $769,000 refund under the Federal Government’s R&D Tax Incentive Scheme.

The cash flow statement for the June Quarter is highlighted below:

A global cannabis investing company, MMJ agreed to invest CAD 2.5 million in the privately-held Sequoya Cannabis Limited, as reported on 22 July 2019, diving into the growing EU market. The investment would be held through MMJ’s wholly owned subsidiary Phytotech Medical (UK) Pty Ltd. The settlement is expected before 31 August 2019 and would be funded from the company’s existing cash reserves of AUD25 million.

After the trading session, on 7 August 2019, the Stock performances on ASX and YTD returns of the discussed stocks are provided below: