Cherry-picking lucrative stocks is every investorâs trail in the stock market, with the reporting season around the corner. August seems to be one of the favourite months for equity market enthusiasts with several ASX-listed companies releasing their earnings reports and financial performances. With the month being a great time to devour in the stock market, market players are keenly estimating financial results and placing their bets on the same.

In this article, we have exclusively selected 9 stocks that seems to be the eye-candies for the investors. Before delving into them, let us take a quick look at their indicative release timeline: 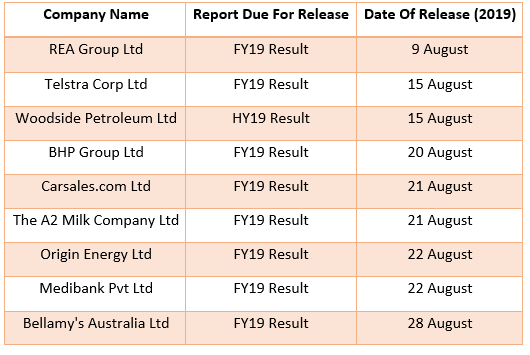 Market players are anticipating FY19 NPAT of at least A$1 billion for energy player, Origin Energy Limited (ASX: ORG) . Investors are awaiting the final results while ORGâs credit rating was recently upgraded from BBB- (positive) to BBB (stable) by the S&P Global Ratings in April this year. Besides, Moodyâs Investor Services upgraded its credit rating from Baa3 (positive) to Baa2 (stable).

Market players are anticipating FY19 NPAT of at least A$10 billion.

Metals and mining colossal, BHP had a great FY19 with its quarterly production up by 11 per cent, overcoming the adverse weather and unplanned outages. The company reported annual production records at several iron, coal, copper and petroleum projects.

Seven out of nine petroleum wells were a hit in their exploration programs and the company is confident to deliver higher volumes in FY20. BHP expects to achieve annual unit cost expectation at Escondida, WA Iron Ore and Petroleum. The unit costs for New South Wales Energy Coal and Queensland Coal and are expected to be above the guidance by the company (based on the yearâs guidance exchange rates).

However, the unplanned production outages of $835 million in 1H had offset the Underlying improvements in productivity. A negative movement of ~$1 billion is anticipated for FY19 by the company.

Communication services mega group, Telstra made a buzz this year for its T22 strategy, wherein good progress was being made with a non-cash impairment of ~$500 million dollars in asset lives of the legacy IT systems which will be booked in the FY19 results. Over the period of the T22 program, the company expects a net reduction of around 8,000 roles, given the investments in TLSâs digitisation.

The company had announced $2.5 billion dollarsâ worth of productivity by the end of 2022 and seems confident to deliver it. An increase of $200 million dollars was announced on the $600 million expected restructuring costs for FY19, and an additional $350 million over the balance of the FY22 program.

The company is looking forward to exploring opportunities in the 5G Boom while market is expecting its FY19 NPAT to be ~A$2.5 billion.

Media and digital advertising player in property space, REA Group generated a revenue of $667.8 million for the nine months ended 31 March 2019, up by 13 per cent on pcp, securing a safe position in the stock haven, amid the challenges of the residential space in Australia. The EBITDA growth was also a delight, up by 15 per cent on pcp, at $404.7 million.

The Hometrack business is expected to deliver the earlier revenue guidance of $14 million - $16 million and an EBITDA of $6 million - $7 million. On a flip side for the company, the decline in mortgage settlements is most likely to adversely impact the remaining financial year and creep into the Q1FY20. Q4FY19 would have a lower rate of revenue growth than Q3, with lower expense growth, as per the company.

In its FY19 results, Private health insurance company, Medibank would provide a much-anticipated update on its productivity initiatives and capital management settings. The dividend payout ratio is expected to be at the higher range of 70 to 80 per cent by the company. MPL is also considering an acquisition of a PHI business.

The company posted strong operating profits in its health insurance and Medibank health ($281.5 million and $12.6 million, respectively), in 1H19. The YTD March investment income was worth $64.2 million. The final dividend payment date is 26 September 2019 followed by an AGM on 14 November 2019.

Producer and distributor of branded baby food products, Bellamyâs Australia encountered some good time in the past couple of months, as the SAMR approved a label and artwork change to the companyâs existing registered ViPlus Dairyâs bovine formula-series. This of part of BALâs strategy to penetrate in the China offline market. The company would invest an amount of $4 million - $6 million to transition the product and to secure long-term production capacity with ViPlus.

Amid this, Bellamyâs organic formula-series application is awaiting the SAMR approval.

Dairy and infant-formula producer and supplier, A2M delivered a strong 1H19, driven by the growing market share in China and expects a further increase in the marketing investment in FY20. Q419 was the period of launch of A2Mâs a2 Smart Nutritionâ ¢ in Australia and CBEC. The volume phasing due to regulatory changes made in Q3 are expected to balance out in Q4. The FY19 EBITDA (as a % of sales) is expected to range between 31 to 32 per cent, with doubled marketing investment in 2H19 compared to 1H19 and a slightly weaker AUD vs the NZD. There has been recent dairy price increase in FY19 as per the Global Dairy Trade Indices, which might impact A2Mâs gross margin percentage in FY20 (no significant impact expected in FY19).

Market player expects the companyâs NPAT to be ~A$290 million for FY19.

A contender of the brimming online automotive advertising industry, Carsales.com has been on the investorâs chart due to its chase of the sale of its 50.1% interest in Stratton Finance Pty Ltd. Miles Advisory Partners was conducting a strategic review for the situation, as notified by the company in June.

On the performance end, the classifieds business in Australia has been robust in the prevailing terse economic environment, while the global businesses have been performing well too. The below image depicts the companyâs guidance, which is awaiting in its FY19 release next month:

Energy giant, Woodside delivered sales revenue of $738 million and production of 17.3 MMboe in Q219 along with strong LNG production from North West Shelf. WPLâs vital growth strategy projects- Browse to NWS Project and the proposed Scarborough development are en-route to securing key regulatory and environmental approvals. The production from the Vincent wells commenced in July 2019 and start-up of the Greater Enfield wells is expected shortly. The company had completed exploration drilling activities for 2019 regarding the LNG production.

The company is expecting production costs to range between $260 and $300 million and the Net finance cost to be between $90 and $130 million for 1HFY19.

Market players are expecting 1HFY19 NPAT to be ~A$600 million.

Below is the YTD return for the stocks under discussion: 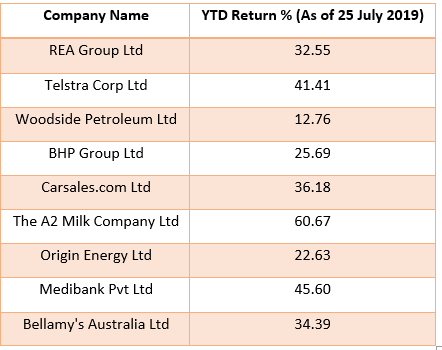 The first half of FY19 has been roller coaster ride for the macro and micro economic environment of Australia, driven by the consecutive rate cuts by the RBA, the property slump scenario, the US-China trade rift and The Royal Commission Era. Amid these developments, Australia has continued to grow on the technological and international business front and is attracting investors to explore the ocean of opportunities in the equity market.

Market participants are keenly monitoring how the financials are unfolded against their expectations.

Also Read: Reporting Season Up There â Strategies To Look At