Australia on the verge of worst economic contraction brought about by coronavirus lockdown is chopping inflation. The country is now eyeing deflation.

As per the latest data released by the Australian Bureau of Statistics (ABS), CPI for March quarter recorded a 0.3% rise reflecting bushfires and coronavirus influence on food prices. Food, health and education accounted for the most significant increase in prices whereas automotive fuel, domestic and international travel holiday recorded the most substantial fall. 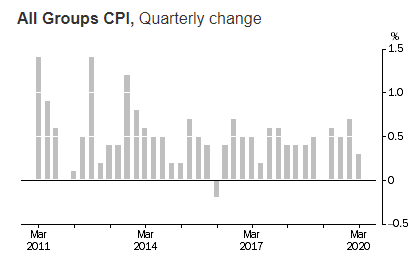 However, the CPI inflation figure is expected to fall into negative in the June quarter of 2020. The fall in CPI will be due to a decrease in oil prices which have fallen more than 50% since January 2020.

Headline inflation reflects the cost that is to be incurred to purchase a fixed basket of goods to determine raw inflation in the broader economy. The headline number is not seasonally adjusted for volatile elements like food and energy, unlike core inflation that tracks inflation without including food and energy prices.

Hence, if the oil prices are removed from the CPI figure, prices would have remained positive. RBA Governor has asserted that the underlying inflation is expected to stay positive. As Australia was already going through a rough phase before the bushfires and coronavirus crisis, any rise in the prices will be very low.

Deflation means a drop in the prices of goods and services that result from a higher unemployment rate and ruining of incomes and demand. If people have fewer earnings, they reduce their purchases which increase the burden of debt and disrupts investment expectations.

RBA has already warned a long period of muted inflation underway due to which it has cut rates to record low of 0.25% and initiated bond buying.

Governor Philip Lowe in its latest business and economic update has forecasted a drop in national output by 10% in months ahead with significant fall in the June quarter while unemployment rate at 10% by June or lower contingent on the ability of businesses to keep hold of employees on lower hours.

ALSO READ: Could major tax reforms be the solution to help the economy? RBA thinks so!

RBA expects inflation to be positive in underlying terms but is gearing up for a sharp fall in the June quarter. He asserted that there could be a possibility of year-end inflation falling into negative territory due to a significant fall in oil prices, free childcare and reduction in some price increases.

However, he asserted that the crisis is temporary, and institutions are well-placed to handle it.

Price fall can seem to be good for consumers, but it reflects things are not going smooth in real. It shows a macroeconomic breakdown with a weak economy that will not be good for everyone. Falling profits with lesser customers implying no new business investment and hiring is clearly not a sign of a healthy economy.

Millions of workers have lost their jobs since lockdown with almost no wage growth; the price of non-essential items is expected to fall. Hence, bad inflation has crept in.

Consumer demand has declined as they cut spending due to economic pressures arising from coronavirus. The recent plunge in oil prices with US crude oil prices falling below 0 for the first time in history has set the trend for deflation. With almost no car usage and closing of significant airline operations amid lockdown has shrunk oil demand massively.

ALSO READ: The Oil Scale Back - A Bedrock for Balancing Demand and Supply Dynamics?

The fall in prices may be a little boost for the real income of consumers, but it will affect mortgage holders.

As per market experts, in nominal terms, the value of debt is fixed, implying an increase in the real value of mortgages due to deflation setting in.

Hence, businesses and households with debt will be under strain as it will go up in real terms in deflationary conditions.

Melbourne Institute Survey of Consumer Inflationary and Wage Expectations has reported that the expected inflation rate increased by 0.6%, reaching 4.6% in April.

About 15.1% of the people have reported a decrease in total pay in April while the overall wage growth expected to rise by only 0.4% over the year.

The path to economic recovery can only be set after the virus is sanctioned, and all restrictions on the commercial activity are lessened and lifted progressively. With Australia already flattening the curve and removal of restrictions later in 2020, economy can begin to bounce in September quarter.

ALSO READ: A Deep Contraction OR Recession - RBA’s take on the Australian economy

As per RBA Governor, the dual shock of health and economic emergency will linger on in the Australian minds for some time, making them reconsider their spending and saving decisions. A massive reorganisation of the economy will be needed with changes in work, shop and travel patterns forcing the need of new business models.

A decent income and low positive inflation would be good for the Australian economy. Inflation must be kept at low single-digit and not at high rising levels if measures are taken to boost inflation within the economy.